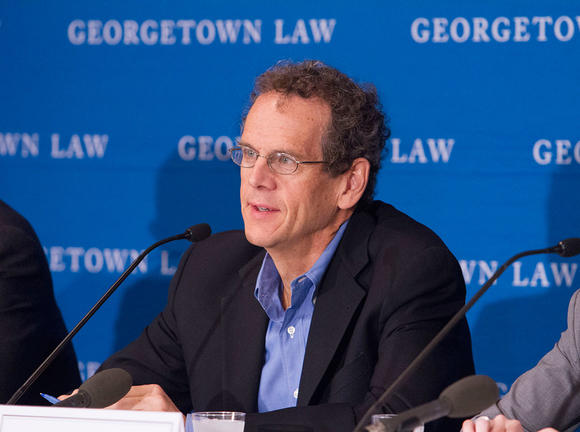 NEW YORK – The American Civil Liberties Union has tapped David Cole, a leading constitutional law expert and litigator, to become its national legal director, leading its Supreme Court practice and overseeing the work of the organization’s nearly 300 lawyers, Executive Director Anthony D. Romero announced today. The ACLU has participated in nearly every landmark case involving political expression, freedom of the press, speech on the internet, and separation of church and state in the U.S. Supreme Court during the last 96 years. Cole will replace Steven R. Shapiro, who has served as national legal director for a quarter century.

“David Cole’s 30 years of constitutional litigation experience including in the Supreme Court, combined with his stellar reputation as a law professor and author of several seminal pieces in the area of criminal justice reform and race relations, makes him the ideal leader for our storied legal program,” said Romero. “We couldn’t be more delighted to bring him on board at this critical time for civil liberties in America's history."

In his role as national legal director, Cole will direct a program that includes approximately 1,400 state and federal lawsuits on a broad range of civil liberties issues. He will directly manage 100 ACLU staff attorneys in New York headquarters, oversee the organization’s U.S. Supreme Court docket, and provide leadership to more than 200 staff attorneys who work in ACLU affiliate offices in all 50 states, Puerto Rico, and Washington, D.C. Another 1,700 volunteer cooperating attorneys throughout the country are engaged in ACLU litigation. With an annual headquarters budget of $140 million, and 1.3 million supporters, the ACLU is the nation’s largest and oldest civil liberties organization.

“I am deeply honored to take on the leadership of the ACLU’s national legal program, which has conducted landmark litigation in defense of civil liberties for nearly a century,” said Cole. “It’s an extraordinary opportunity, as the ACLU’s legal prowess has been built up impressively over the last 15 years, and has been bolstered by its important foray into state-based advocacy. There is no better defender of Americans’ civil liberties.”

“David is a brilliant legal visionary, whose commitment to equal justice and due process is unwavering,” said Sherrilyn Ifill, president and director-counsel of the NAACP Legal Defense and Educational Fund. “I regard him as a trusted colleague and friend and look forward with excitement to working in collaboration with him and his legal team.”

Cole has litigated many constitutional cases in the Supreme Court, including Texas v. Johnson and United States v. Eichman, which extended First Amendment protection to flag burning; National Endowment for the Arts v. Finley, which challenged political content restriction on NEA funding; and Holder v. Humanitarian Law Project, which challenged the constitutionality of making it a crime to advocate for peace and human rights under the statute prohibiting “material support” to terrorist groups.

Cole’s victories include: successfully defending for over 21 years a group of Palestinian immigrants whom the government sought to deport for their political affiliations; challenging restrictions on federally funded AIDS education; obtaining an injunction against Randall Terry and Operation Rescue for blocking access to abortion providers; and freeing several Arab and Muslim immigrants detained on secret evidence. Cole, who began his career at the Center for Constitutional Rights, litigated many of these cases in cooperation with ACLU attorneys across the country.

Cole writes regularly for The Nation, New York Review of Books, Washington Post, and many other journals.  He is the author or editor of 10 books. Less Safe, Less Free: Why America Is Losing the War on Terror, published in 2007, and co-authored with Jules Lobel, won the Palmer Civil Liberties Prize for best book on national security and civil liberties. Enemy Aliens: Double Standards and Constitutional Freedoms in the War on Terrorism, received the American Book Award in 2004. Cole’s first book, No Equal Justice: Race and Class in the American Criminal Justice System, is one of the first to examine the ways that the criminal justice system exploits and exacerbates racial disparities.  It was named Best Non-Fiction book of 1999 by the Boston Book Review. His most recent book, Engines of Liberty: The Power of Citizen Activists to Make Constitutional Law, published in 2016, examines the strategies civil society organizations employ to change constitutional law.

Founded in 1920 by Roger Baldwin and Crystal Eastman, with Felix Frankfurter and Helen Keller as leaders of its first board of directors, the ACLU is non-partisan and is known for assembling a broad coalition of conservatives, moderates, and progressives to advance civil liberties throughout the country.