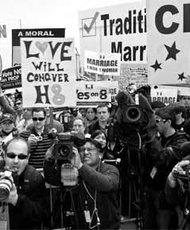 SAN FRANCISCO – In a landmark decision today, a federal judge ruled that Proposition 8, the California ballot initiative that excluded same-sex couples from marriage in the state, violates the United States Constitution. The American Civil Liberties Union, the National Center for Lesbian Rights (NCLR) and Lambda Legal filed two friend-of-the-court briefs in the case supporting the argument that Proposition 8 is unconstitutional.

“Today’s decision is a huge victory for the LGBT people of America. For the first time, a federal court has conducted a trial and found that there is absolutely no reason to deny same-sex couples the fairness and dignity of marriage,” said James Esseks, Director of the ACLU Lesbian, Gay, Bisexual and Transgender Project. “At the same time, we know that this is not the end. In order to give this case the best possible chance of success as it moves through the appeals courts, we need to show that America is ready for same-sex couples to marry by continuing to seek marriage and other relationship protections in states across the country. It’s simply not fair, and not legal, to continue to exclude committed same-sex couples from marriage.”

In the case, Perry v. Schwarzenegger, Judge Vaughn R. Walker of the U.S. District Court in San Francisco ruled that Proposition 8 violates the Constitution’s guarantees of due process and equal protection. The lawsuit was brought by two same-sex couples after Proposition 8 passed in 2008, amending the California Constitution to deny same-sex couples the freedom to marry.

The ACLU is working with same-sex couples throughout the country to secure the freedom to marry by working to pass marriage bills in New York, Rhode Island and Maine and by seeking domestic partnership recognition in Montana, Hawaii, Illinois, New Mexico and Alaska.

The court’s ruling can be found at: www.aclu.org/lgbt-rights/perry-v-schwartzenegger-decision

The latest in LGBTQ Rights

The ACLU works to ensure that lesbian, gay, bisexual, transgender and queer people can live openly without discrimination and enjoy equal rights, personal autonomy, and freedom of expression and association.