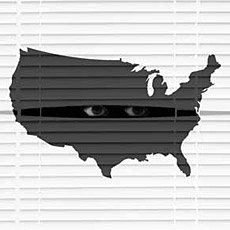 WASHINGTON – The FBI improperly spied on American activists involved in First Amendment-protected activities and mischaracterized nonviolent civil disobedience as terrorism which improperly placed activists on terrorist watch lists, according to a report out today by the Justice Department’s Inspector General. Inspector General Glenn A. Fine undertook his investigation after a Freedom of Information Act (FOIA) request by the American Civil Liberties Union uncovered evidence that the FBI was chilling political association and improperly investigating peaceful advocacy groups.

The Inspector General (IG) found the improper investigations were often opened based on “factually weak” or even “speculative” justifications, and were sometimes extended in duration without sufficient basis. The IG said that the low standard for opening investigations under the 2002 Attorney General Guidelines, which required only the “possibility” of a federal crime, contributed to the problem.

The FBI also made false and misleading statements to Congress and the American public to mute criticism over its unlawful spying activities, including a false claim that improper surveillance of a 2002 anti-war protest in Pittsburgh was related to a separate, validly approved FBI investigation. This false information was repeated by FBI Director Robert Mueller before Congress and in communications between the Bureau and Senator Patrick Leahy (D-VT).

The following can be attributed to Michael German, ACLU Senior Policy Counsel and former FBI agent:

“The FBI has a long history of abusing its national security surveillance powers, reaching back to the smear campaign waged by the American government against Dr. Martin Luther King. Americans peacefully exercising their First Amendment rights were able to become targets of FBI surveillance because spying guidelines that were established after the shameful abuses of the 60s and 70s were loosened in 2002. Unfortunately, they were loosened again in 2008, even after this abuse was uncovered.

“Unless the rules regulating the FBI are strengthened to safeguard the privacy of innocent Americans, we are all in danger of being spied on and added to terrorist watch lists for doing nothing more than attending a rally or holding up a sign.”