NEW YORK— The New York Civil Liberties Union today filed a federal lawsuit against school officials for illegally suspending a group of girls for going to a “”hooky party”” and then refusing to let them return to school until they underwent intrusive and highly private medical examinations and turned over the test results. 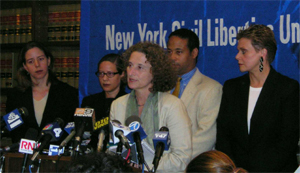 At a news conference, NYCLU Executive Director Donna Lieberman describes how a New York City school forced teen-age girls to take gynecological examinations and other tests because they had attended a “hooky party” during school hours.

“”We are suing to make sure that the rights of female students are never violated this way again,”” said Donna Lieberman, Executive Director of the NYCLU. “”Despite our urging, the Department of Education has failed to take these allegations seriously. By acquiescing in the school’s behavior, the Department of Education has seriously undermined the girls’ health and education.””

The incident arose in mid-April of this year, when a group of 13- and 14-year-old girls at Intermediate School 164 in Washington Heights were targeted after allegedly skipping school on a Friday to attend a “”hooky party.”” When they returned to school, they were pulled from their classes, interrogated and told that they could return to class only if they got gynecological examinations and tests for pregnancy and sexually transmitted diseases. According to the legal complaint, administrators refused to allow the girls to return to their classes until they submitted notes showing the results of these tests.

The NYCLU represents two recent graduates of the school, who are identified only as “”Jane Doe”” and “”Sara Roe”” to protect their privacy. The lawsuit was filed in U.S. District Court in the Southern District of New York against two school administrators, the Department of Education, and city officials.

“”This incident is part of a pattern of the school system taking a fundamentally misguided approach to teen-age girls and their health,”” said Lieberman. “”To add insult to injury, the school administrators assumed that they could keep the students out of school based on the results of the tests. That is clearly illegal.””

Dr. David Bell, an adolescent medicine specialist at New York Presbyterian Hospital’s Family Planning Clinic who examined several girls seeking notes so that they could return to school, added that a health care provider, not a school principal, should order medical examinations. “”When you force teens to undergo intrusive medical procedures as punishment, you alienate them from the health care system and health providers they need to be able to rely on and trust in order to protect their well-being,”” he said. Bell is also an assistant clinical professor of Pediatrics and Population and Family Health at Columbia University’s Mailman School of Public Health and Babies’ Hospital.

“”The incident was demeaning and perpetuated harmful stereotypes about girls and their bodies,”” said Rebekah Diller, Director of the NYCLU’s Reproductive Rights Project, who noted that, to her knowledge, no boys involved in the incident were forced to undergo medical testing. “”In ordering the tests, school officials targeted the girls and branded them with the ‘Scarlet Letter’ for attending the party.””

The NYCLU’s legal complaint is online at /node/35069

The NYCLU’s May 8, 2003 letter to Department of Education Chancellor Joel Klein is online at /node/24923