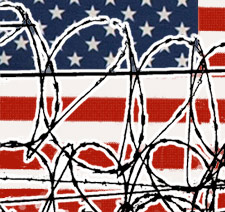 NEW YORK – In a move that undermines civil liberties and the rule of law, the Obama administration today announced that it will prosecute the suspects accused of planning the 9/11 attacks in the Guantánamo military commissions system.

In one of the first acts of his new presidency, President Obama called a halt to the military commissions. A joint Department of Justice and Department of Defense task force was then created to conduct careful review of the appropriate forum for trials for accused terrorists held on Guantánamo. Attorney General Eric Holder had announced the result of that process in November 2009: the 9/11 defendants would be prosecuted in federal courts. The administration delayed in response to political pressure, and has now backtracked under pressure from within and outside of Congress.

“The Obama administration’s decision to use the broken and deficient military commissions system to prosecute the most important terrorism cases of our time is completely wrong. There is a reason this system is condemned: it is rife with constitutional and procedural problems and undermines the fundamental American values that have made us a model throughout the world for centuries. Attorney General Holder’s previous decision to try the 9/11 defendants in federal court was absolutely the right call but this flip flop on the part of the Obama administration is devastating for the rule of law and greatly undermines America’s standing abroad.

“These cases have already been delayed for years by the Bush administration’s legally and morally disastrous decision to subject the 9/11 defendants to torture and indefinite detention. Cases prosecuted by the Obama administration in the commissions now are sure to be subject to continuous legal challenges and delays, and their outcomes will not be seen as legitimate. That is not justice. Americans deserve better.”