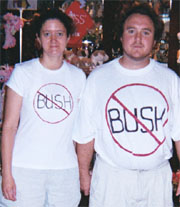 Nicole and Jeff Rank wearing the t-shirts that caused their arrest and removal from the West Virginia Capitol grounds.

CHARLESTON, WV – The American Civil Liberties Union today filed a lawsuit against the United States Secret Service and Greg Jenkins, Deputy Assistant to the President and Director of White House Advance, on behalf of a West Virginia couple who were arrested at a Fourth of July presidential appearance at the state Capitol because they were wearing t-shirts critical of the president.

“”This is a simple case,”” said ACLU Senior Staff Attorney Chris Hansen, who is the lead counsel in the case. “”Two Americans went to see their president and to express their disagreement with his policies respectfully and peacefully. They were arrested at the direction of federal officials. That is precisely what the First Amendment was adopted to prevent.””

Jeff Rank, 29, who is a registered Republican, and his wife Nicole, 30, had never engaged in political protest in the past, and said that they had no intention to disrupt the president’s visit. The Ranks obtained tickets for the event and were admitted to the Capitol grounds without any problems, but drew attention when they removed their outer garments to display t-shirts bearing the international “”no”” symbol (a circle with a diagonal line across it) superimposed over the word “”Bush.””

Although the couple stood peacefully on the public grounds with the rest of the audience, two men believed to be working for the Secret Service or White House approached the Ranks and demanded that they remove or cover their t-shirts. When the couple refused, the officials instructed city police to arrest Jeff and Nicole, causing them to be removed from the Capitol grounds in handcuffs, jailed for one to two hours and charged with trespassing. Nicole Rank was also temporarily suspended from her work with the Federal Emergency Management Agency (FEMA).

“”We wanted to see the president speak and express our disagreement in what little way we could,”” said Nicole Rank, who is originally from Corpus Christi, Texas but was assigned to work on a FEMA flood relief project in West Virginia. “”We never imagined that we would end up in jail because of a homemade t-shirt.””

The charges against the Ranks were ultimately dismissed in court and the mayor and city council publicly apologized for the arrest. City officials also said that local law enforcement was acting at the request of Secret Service.

“”It is clear that our Charleston police officers were acting at the request of federal government officials and would otherwise have respected the First Amendment rights of our residents,”” said ACLU of West Virginia Executive Director Andrew Schneider. “”The Ranks were ejected for wearing t-shirts expressing a dissenting opinion while other attendees wearing Bush campaign t-shirts and buttons were allowed to remain.””

In September, the ACLU asked a federal court to bar the Secret Service from directing local police to restrict protesters’ access to presidential visits. The Secret Service denied engaging in the practice, but agreed with the ACLU that such actions would be inappropriate and unlawful.

“”The Secret Service has promised to not curtail the right to dissent at presidential appearances, and yet we are still hearing stories of people being blocked from engaging in lawful protest,”” said Hansen. “”It is time for the Secret Service to stop making empty promises.””

The lawsuit, Rank v. Jenkins, is seeking unspecified damages as well as a declaration that the actions leading to the removal of the Ranks from the Capitol grounds were unconstitutional.

For more information on the ACLU’s work to protect protest rights, go to /FreeSpeech/FreeSpeechlist.cfm?c=86.

The latest in Free Speech

Protecting free speech means protecting a free press, the democratic process, diversity of thought, and so much more. The ACLU has worked since 1920 to ensure that freedom of speech is protected for everyone.