WASHINGTON – At events attended by President Bush and other senior federal officials around the country, the Secret Service has been discriminating against protesters in violation of their free speech rights, the American Civil Liberties Union charged today in the first nationwide lawsuit of its kind. 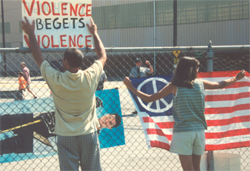 When President Bush came to Neville Island, PA last year, protesters were herded behind a chain-link fence in a remote area while supporters were allowed to line the motorcade route. One man who refused to be corralled was arrested. 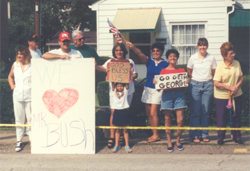 During President Bush’s visit to Neville Island, PA last year, supporters were allowed to line the motorcade route, while protesters were herded to a remote area out of sight of the press corps and the President.

The ACLU said it had seen a significant spike in such incidents under the Bush Administration, prompting it to charge officials with a “”pattern and practice”” of discrimination against those who disagree with government policies.

According to ACLU legal papers, local police, acting at the direction of the Secret Service, violated the rights of protesters in two ways: people expressing views critical of the government were moved further away from public officials while those with pro-government views were allowed to remain closer; or everyone expressing a view was herded into what is commonly known as a “”protest zone,”” leaving those who merely observe, but express no view, to remain closer.

Security is not at issue, the ACLU noted, because anyone intent on harming officials would simply carry a sign with a supportive message or no sign at all. “”The individuals we are talking about didn’t pose a security threat; they posed a political threat,”” Walczak said.

The case was filed on behalf of four national advocacy groups that engage in frequent demonstrations around the country. The groups are: Association of Community Organizations for Reform Now (ACORN), United for Peace and Justice (UPFJ), USAction, and National Organization for Women (NOW).

The national lawsuit, which was filed in Philadelphia, originated earlier this year when the ACLU of Pennsylvania sought enforcement of a 1988 decree requiring city officials to treat protesters fairly. Today’s action amends that lawsuit to include similar incidents around the country. The Secret Service is named as the federal defendant in the lawsuit, along with the Philadelphia Police Department for its role in the recent demonstrations in that city.

ACLU of Pennsylvania Legal Director Stefan Presser, who obtained the 1988 decree and is part of the national legal team in today’s lawsuit, noted that he has had to return to court several times following incidents in which local protesters were kept further away from the site of presidential visits than Administration supporters. A high-ranking official of the Philadelphia police told Presser that he was only following Secret Service orders.

“”The Secret Service’s directives, which have the effect of deciding which messages are to be afforded favorable treatment, are completely at odds with our Constitution’s guarantees of free speech and rights of protest,”” Presser said.

The ACLU’s legal papers listed more than a dozen examples of police censorship at events around the country, saying that all had been initiated at the behest of the Secret Service and that such incidents are on the rise. The incidents described took place in Arizona, California, Connecticut, Indiana, Michigan, Missouri, New Jersey, New Mexico, South Carolina, Texas and Washington, among other places.

In one example, retired steelworker Bill Neel, 66, was handcuffed and detained by local officials at a rally in western Pennsylvania last year after he refused to be herded into a remote “”designated free speech zone”” located behind a six-foot chain-link fence.

“”As far as I’m concerned, the whole country is a free speech zone,”” Neel said. “”If the Bush Administration has its way, anyone who criticizes them will be out of sight and out of mind. Anyone who calls himself a patriot ought to be as concerned about this as I am.””

Neel’s story and similar incidents are also described in a May 2003 ACLU report, Freedom Under Fire: Dissent in Post-9/11 America. The report looks at government crackdowns on dissent in a variety of contexts, including at presidential and vice-presidential appearances, in public schools and at anti-war rallies.

The latest in Free Speech

Protecting free speech means protecting a free press, the democratic process, diversity of thought, and so much more. The ACLU has worked since 1920 to ensure that freedom of speech is protected for everyone.