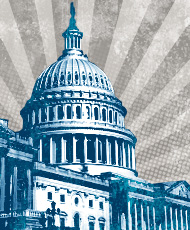 WASHINGTON – Senator Lindsey Graham (R-SC) has presented legislation to the White House regarding future handling of terrorism suspects, according to a report in the Washington Post today. Senior White House officials reportedly have begun circulating a summary of the draft legislation to some members of Congress. Graham has reportedly outlined new procedures for habeas corpus claims and a new indefinite detention authority. The American Civil Liberties Union believes that detaining individuals indefinitely without charging them with a crime or providing them a meaningful opportunity to challenge their detention is un-American and violates our commitment to due process and the rule of law.

Senator Graham has also been urging the Obama administration to use the discredited military commissions for the trials of 9/11 suspects despite Attorney General Eric Holder’s announcement in November that the Justice Department would be using federal criminal courts for these prosecutions. Since 9/11, there have been over 300 successfully completed terrorism-related trials in federal court. The military commissions have completed only three terrorism-related cases, with two of three convicted defendants having served relatively short sentences they have already completed.

The ACLU believes the military commissions, despite some improvements through legislation, remain unworkable and should be shut down for good. President Obama has reportedly not yet reached a decision on where to hold the 9/11 trials.

The following can be attributed to Laura W. Murphy, Director of the ACLU Washington Legislative Office:

“Despite pressure from Senator Graham, the Obama administration should not enact any policies that allow for the indefinite detention of individuals – potentially for a lifetime – without providing due process and a meaningful opportunity to challenge the detention. Indefinite detention without charge or trial flies in the face of American values and violates this country’s commitment to the rule of law. The assumption that sacrificing our principles will make us safe is not only false; it is dangerous. If Senator Graham’s legislation is introduced, Congress must stand strong and uphold our most cherished values, not cement into law policies that rival the worst of the Bush administration’s legacy. Even during years immediately following 9/11, Congress never took the unprecedented step of passing an indefinite detention statute. Now that there is a president and Congress who have stated a commitment to the rule of law, it would be a terrible irony to have this kind of legislation seriously considered. We urge both the White House and Congress to reject any indefinite detention proposal.”

The following can be attributed to Jameel Jaffer, Director of the ACLU National Security Project:

“The Obama administration should not use the discredited military commissions system for the most important terrorism trials in American history. The federal criminal justice system has experienced judges, experienced prosecutors, a track record that includes hundreds of successful terrorism prosecutions and procedural rules that have been tested and refined over two centuries. To displace this system for a military commissions system that does not have rules, that is certain to result in further delay, that has resulted in only three convictions over eight years and that is viewed as illegitimate by much of the rest of the world, would be deeply irresponsible. Attorney General Holder’s decision to use federal criminal courts was the right decision for national security and the right decision for the rule of law. The Obama administration should reaffirm the decision, not reverse it.”

More information about why terrorism suspects should be tried in civilian courts is available online at:
www.aclu.org/national-security/terrorism-cases-should-be-tried-federal-court