In Unprecedented Move, U.S. Fails to Show Up for Human Rights Hearing

WASHINGTON — In a surprise move, the U.S. government today refused to attend a hearing of the Inter-American Commission on Human Rights. The human rights body, which is part of the Organization of American States, was scheduled this morning to question U.S. officials on the effects of several of President Trump’s executive orders, including orders on the Muslim ban, immigration enforcement and detention, and the approval of the Dakota Access Pipeline.

Jamil Dakwar, director of the American Civil Liberties Union’s Human Rights Program, is appearing before the commission this morning along with representatives of other advocacy organizations.

“Today’s no-show is a new low,” said Dakwar. “The Trump administration’s decision is an unprecedented show of disrespect to the international community that will alienate democratic allies. Refusing to engage with the commission is an isolationist policy that mirrors the behavior of authoritarian regimes and will only serve to embolden them. This is another worrying sign that the Trump administration is not only launching an assault on human rights at home but is also trying to undermine international bodies charged with holding abusive governments accountable.”

This photo, taken today by the ACLU, shows the empty chairs where the U.S. representatives were to have sat during the hearing: 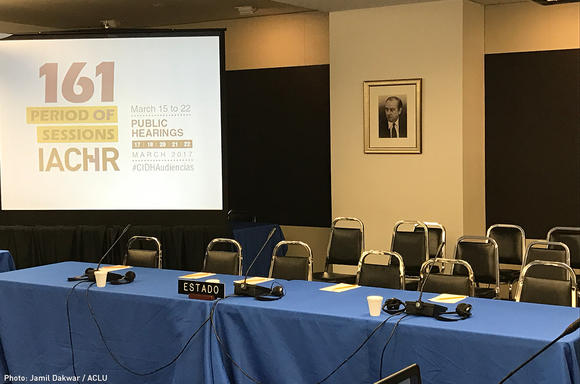 The commission, which was created in 1959, has played a historic role in fighting barbaric military dictatorships in the Americas and countering other human rights abuses.

This morning’s hearing goes from 10:15 to 11:15 a.m. A second hearing from 11:30 a.m. to 12:30 p.m. will focus on policies that hamper access to asylum for migrants arriving at the U.S.-Mexico border, particularly from Central America. A webcast is here: http://original.livestream.com/CIDH1ENG