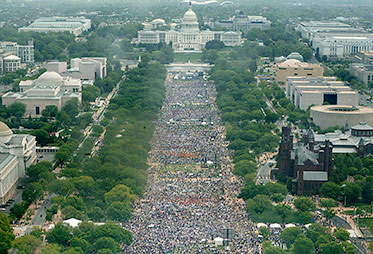 2004 Over one million people marched in support of reproductive freedom during the March for Women's Lives on April 25.

'The ability of women to participate equally in the economic and social life of the Nation has been facilitated by their ability to control their reproductive lives.'
-- Planned Parenthood v. Casey

Since its founding, the ACLU has recognized that personal privacy and reproductive rights are among our most important constitutional liberties. So much depends on our ability to decide – free from government interference – whether and when to become a parent. With reproductive freedom comes opportunity: the opportunity to obtain a good education, to shape one's economic circumstances, to participate in the democratic process, to find love, to build families, to decide what makes for a good life, and to have the opportunity to live that life.

At the time the ACLU first opened its doors in 1920, most states criminalized birth control and abortion care, and it was a federal crime to distribute birth control information through the U.S. mail. Yet many women still sought birth control and abortions. In its earliest years, for example, the ACLU defended Margaret Sanger and Mary Ware Dennett when officials tried to prevent them from publishing materials and speaking about human sexuality, reproduction, and contraception.

The criminal ban on abortion in most states that began in the mid-1800s and lasted until 1973, affected poor women the most profoundly. Well-to-do women could persuade their physicians to quietly perform the procedure, but those who could not afford private care often died from bleeding or infections following procedures performed by unskilled providers or from self-induced abortions carried out in desperation. The ACLU was committed to addressing these unjust and harmful policies in order to ensure that all women could get the reproductive health care they needed.