Florida: Amendment 4 passes, restoring voting rights to most people convicted of felonies after the full completion of the terms of their sentences. This constitutional amendment affects some 1.4 million people. Until Tuesday night, Florida was one of just four states where individuals convicted of felonies were disenfranchised for life. Now its voters are responsible for the single biggest expansion of the franchise since the passage of the 26th Amendment in 1971.

Michigan: Proposal 3 passes, modernizing the state’s voting system for the first time since 1975. The ballot initiative amends the state constitution to automatically register voters; allow voters to register at any time, up to and including on Election Day; expand access to absentee ballots; allow for straight-ticket party voting; and ensure those in the military get their ballots with enough time to ensure their vote is counted.

Maryland: Question 2, which allows qualified individuals to register and vote at their polling location on Election Day, passes. ​​

The fourth Tuesday of September every year is National Voter Registration Day, a day organizations across the country focus attention on the importance of registering to vote and participating in our democracy. In some states, however, voting and registration rules, which have reduced participation in elections and not kept up with advances in technology, need a significant overhaul.

This November, ballot initiatives in four states — Michigan, Florida, Nevada, and Maryland — seek to address this problem. If successful, these initiatives may allow more than a million additional citizens to register and have their voices heard on Election Day.

In Michigan, a state that has not adopted a substantial voting modernization since 1975 and in which the last presidential election was decided by just less than 11,000 votes, Proposal 3 was recently approved for November’s ballot. Proposal 3, if passed, will amend the state constitution to automatically register voters; allow voters to register any time, up to and including on Election Day; require post-election audits; expand access to absentee ballots; allow for straight-ticket party voting; and ensure those in the military get their ballots with enough time to ensure their vote is counted. The proposal is led by Promote the Vote, a campaign launched by ACLU of Michigan along with the NAACP and League of Women Voters.

Florida is one of only four states with a lifetime ban on voting for individuals with felony convictions, even after they have paid their debt in full. Currently, 1.4 million Floridians have completed all terms of their sentence as ordered by a judge, including probation and parole. However, these individuals are not eligible to register and vote unless they go through a long and difficult process to restore their voting rights.

To fix Florida's broken system, ACLU of Florida has partnered with the Second Chances campaign to pass Amendment 4 to the state constitution. Floridians can earn back their eligibility to vote after they have completed all terms of their sentence as ordered by a judge. Those convicted of murder or felony sexual offenses would be excluded. This amendment would allow Floridians who have made a past mistake and fully paid their debt to society to have the opportunity to participate in and give back to their communities.

Lastly, in Maryland, voters will have an opportunity to pass an Election Day registration amendment, which would allow qualified individuals to register and vote at their polling location on Election Day. States with Election Day voter registration see an average of 10 percent higher turnout in presidential years than states without it, and studies have found that people of color, young people, and low-income individuals especially benefit from this reform.

These ballot initiatives will help remove barriers and ensure that eligible individuals are able to participate in our democracy. For more information on how to get involved with expanding voting rights and to find your voter registration deadline, visit www.aclu.org/voter.

This content is paid for by American Civil Liberties Union, Inc., 125 Broad Street, New York, New York, 10004.  Authorized by and provided in-kind to Promote the Vote, to Floridians for a Fair Democracy, and to Nevadans for Secure Elections.

We need to vote you know who out before he does total and permanent damage.

We need Voter ID in America.
Additionally, if you file an income tax return, then you should be allowed the right to vote.

Republicans may be about to steal an election in Georgia https://www.washingtonpost.com/blogs/plum-line/wp/2018/10/11/republicans-may-be-about-to-steal-an-election-in-georgia/?utm_term=.f729ad3635a5

What can you do about this?

Make it easy as possible for all voters to get registered but then voters should have to provide some form of ID when they turn up to vote. That's fair all round.

Unfortunately, independent and other third parties like the greens and libertarians etc, are being blocked from the debates even after they've won the right to debate. So the electorate never gets a chance to vote for anyone who isnlt approved by the DC establishment.

That's where the real battles lies.

Back in the 2014 mid-terms we saw third parties poll as high as 50%. It's unprecedented. As well, voters who had left both parties were also as high as 50%. We've not seen that at any time in modern history. Every year the number of voters who are unaffilated with either mainstream party is growing. And, of course, we got Trump. There was no way the establishment didn't see what was going on and there was no way they werenlt going to do something about it.

Putting discussion aside with regard to the right to vote for a moment, the reality is that the system itself is rigged. No matter what, we're going to be voting for two sides of the same coin unless we can overcome the obstacles that the establishment party of one is placing in front of us with their arbitrary rules. 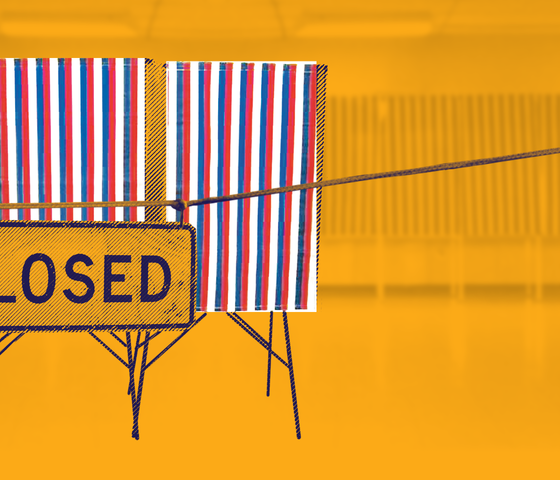 Rights for All Will Put Civil Rights and Civil Liberties Front and Center in...

As the 115th Congress Ends, Here Are the Important Civil Rights Battles We've...

John McCain's Replacement Has a History of Undermining Civil Liberties