By Cecillia Wang, Deputy Legal Director and Director of Center for Democracy
Tags

In coming days, President Trump is expected to announce the maximum number of refugees the United States will accept in the next fiscal year. Trump may cap the number at 50,000 or even lower, The New York Times has reported — fewer than any year since the beginning of the modern refugee resettlement program in 1980. In the midst of the world’s largest refugee crisis since World War II, the United States is set to abdicate its global leadership and abandon tens of thousands of vulnerable people.

This is not only about numbers.

Imagine that your family’s home has turned into a war zone. You feel pinned down by bombs and gunfire. You run with your kids, grabbing whatever comes to mind: some food, your cell phone, medicine, and family photos and ID cards. You walk across a border to the unknown, because the unknown is safer than home. This is life for more than22 million people — this is what being a refugee looks like in 2017.

But this is a story about numbers, too, so let’s explain them.

The U.S. president decides how many refugees may enter the country each year. Since the Refugee Act was passed in 1980, presidents of both parties have recognized our national responsibility to resettle the most vulnerable — and our country has benefited as many of those refugees, and their children, became Americans.

Republican Presidents Ronald Reagan and George H.W. Bush both agreed to let in around 140,000 refugees in at least one year. Republican President George W. Bush mostly held the cap at 70,000 to 80,000, which stayed roughly steady during President Obama’s two terms, until it rose to 110,000 in the current fiscal year as the worldwide refugee crisis deepened. Dropping the refugee resettlement cap to 50,000 people or even lower, as President Trump is expected to do, is a disturbing abdication of our responsibility and leaves tens of thousands of lives in peril. 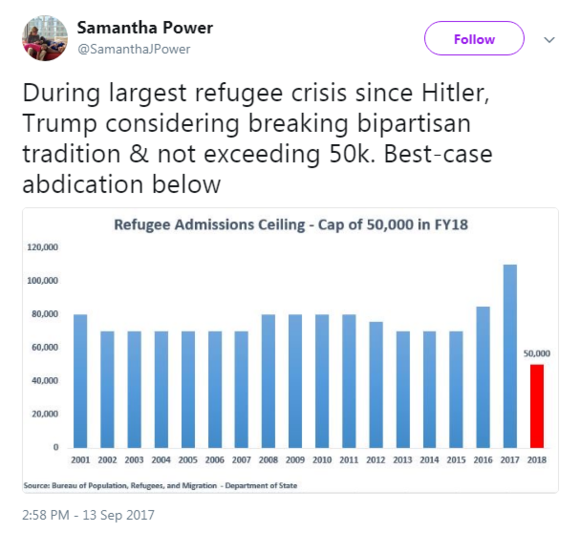 In contrast to the United States, other countries are currently seeking to admit more refugees during the current crisis. In 2005, only 14 countries officially resettled refugees; by 2016, 37 countries did. Some have thrown their doors open, like Canada — a country with one-tenth of the population of the United States that had accepted more than 40,000 refugees from Syria alone by January 2017. In contrast, the United States had by then accepted only 18,000. Many other countries, like the United Kingdom, Australia, and Brazil, are looking for ways to expand opportunities for private citizens to sponsor refugees.

Trump’s anticipated reduction of the refugee resettlement cap is yet another executive decision based on rank xenophobia and contrary to sound foreign policy. It is in line with his infamous Muslim ban executive order, and with Vice President Pence’s longtime efforts to smear and scapegoat refugees — particularly those from Syria and other predominantly Muslim countries.

When he was the governor of Indiana, Mike Pence led the charge against vulnerable refugees. Like Texas and Tennessee, Indiana tried to block the resettlement of Syrian refugees — and in some cases all refugees. In Indiana, the federal courts blocked Pence’s efforts in a lawsuit filed by the ACLU on behalf of a refugee resettlement organization, Exodus Refugee Immigration, Inc.

In Texas, one of the country’s largest states for resettling refugees, Gov. Greg Abbott went so far as to sue the United States and one of the country’s largest refugee resettlement organizations, the International Rescue Committee (which the ACLU represented), to stop them from resettling refugees in Texas, but a federal court rejected that attempt as well. The General Assembly of Tennessee has since sued the federal government to stop refugee resettlement in the state — a case the ACLU is also fighting.

U.S. national security experts aligned with both Democratic and Republican administrations have stated publicly and in court documents that efforts to block Syrian refugees are nonsensical because of the stringent security procedures already in place. These officials also point out that such bans actually damage U.S. national security because a ban would leave U.S.-allied individuals in peril and bolster ISIS’s anti-U.S. propaganda.

The United States only resettles the most vulnerable Syrians — primarily families with young children, LGBT individuals, or people with serious medical conditions who need treatment in the United States, and they go through an enhanced security screening process. All refugees are screened by the National Counterterrorism Center, the FBI, the Defense Department, the State Department, and U.S. Customs and Border Protection, and the wait takes an average of 18 to 24 months. Contrary to hostile federal and state officials’ media spin, entering the United States as a refugee is one of the most difficult ways to come to the United States.  Indeed, in attempting to justify his Muslim ban executive order, President Trump could identify only two incidents of terrorism involving a refugee, out of about one million refugees resettled in the United States since 2001, and one of those cases involved a naturalized U.S. citizen who arrived as a refugee as a toddler.

If President Trump goes through with a drastic reduction of the U.S. refugee resettlement cap, he will be taking the United States one more step toward extreme xenophobia and white nationalism.

This is a road we’ve walked before. In 1939, the United States turned away 937 passengers on the German ship St. Louis, almost all Jewish refugees, because of hysterical fears about spies and saboteurs among the refugees. The ship returned to Europe, where 254 of the passengers were murdered in the Holocaust.

History proves that the impact of xenophobia is never limited to immigrants and refugees.  Less than three years after the St. Louis steamed out of the port of Miami, President Roosevelt signed Executive Order 9066, which took 120,000 people of Japanese ancestry — about two-thirds of whom were U.S. citizens — away from their homes and communities in the western United States and put entire families in makeshift prison camps.

The Japanese-American internment, too, was animated by a xenophobic and racist impulse. In defending the order in the Supreme Court, the Justice Department  presented false information about a purported security threat posed by Japanese  Americans, and deliberately suppressed a report by the U.S. Office of Naval Intelligence that concluded that only a small number of people of Japanese-American ancestry posed a security threat and had already been taken into custody.  The solicitor general of the United States argued that Japanese Americans were disloyal and motivated by “racial solidarity.”

The actions taken by the U.S. government during World War II, spurred by rampant xenophobia and deliberately exaggerated security threats, stand as a moral lesson. If we fail to apply that lesson today, we will write yet another ugly chapter in our history books to our everlasting regret.

ICE Makes It Impossible for Immigrants in Detention to Contact Lawyers