VIDEO: ‘SB 4 Is Patently Unconstitutional and Is Bad Policy’

On September 1 in Texas, SB 4 will take effect. And on that day, all law enforcement across the state will be immediately transformed from police officers into something much different.

“SB 4 says that every local police officer, sheriff, and mayor throughout Texas now needs to enforce immigration law,” according to Lee Gelernt, deputy director of the ACLU’s Immigrants’ Rights Project. And these public servants have every incentive to comply with the law, he notes, because SB 4 “imposes fines in the tens of thousands of dollars, jail time, and even removal from office for violations of law.”

The fear of losing their jobs is palpable among police officers. “I’m worried because my career … it could end,” says Officer Edgar Garcia of the El Cenizo Police Department. “We can be penalized or even … they’ll give us jail time.” 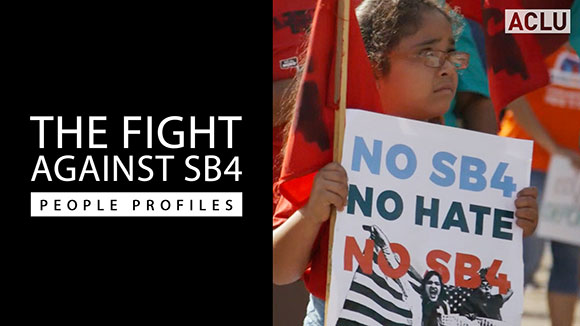 The penalties combined with the very nature of the law, Gelernt explains, will further erode the trust between the police and the communities they serve. This is for two predictable reasons. Police will undoubtedly racially profile Hispanic or Latino people — communities that make up nearly 40 percent of the state’s population. And they will improperly apply the law for fear of being seen as weak on immigration enforcement.

Officer Garcia agrees. “I want to be out here … making people feel safe,” he says. “I don’t want them to feel afraid.”

At a time when there’s a lack of confidence in policing and immigrants are under attack from the highest offices of state and federal government, SB 4 is a terrible law. But it’s also patently unconstitutional, which is why the ACLU, the ACLU of Texas, and cities and counties across the state are currently challenging it in federal court. We expect a decision before September 1, when SB 4 goes into effect.