WATCH: This Student Was Arrested for Challenging an Abusive Officer in School

One day last fall, Niya Kenny was sitting in her math class at Spring Valley High School in Richland County, South Carolina, when a police officer came into the classroom. A girl in her class had refused to put away her cell phone, and the teacher had summoned an administrator, who called on the officer assigned to the school.

Niya thought the officer was bad news — his name was Ben Fields, but he was so aggressive that students knew him as Officer Slam. As soon as he entered the room, she called out for other students to record him.

Three different students made cell phone videos of what happened next. Fields picked the girl up, flipped her in her desk, and then grabbed an arm and a leg to throw her across the room. Niya stood up and called out, she recalled later. “Isn’t anyone going to help her?” she asked. “Y’all cannot do this!”

Fields yelled at Niya to sit down and be quiet. She was so scared that she was yelling and crying. As Fields handcuffed the other girl, he turned toward Niya and told her she was going to jail, too. Niya was arrested, taken to jail for the day, and released with criminal charges of “disturbing a school.”

Today she’s fighting back. On her behalf, the ACLU filed a lawsuit against South Carolina to challenge a law that makes “disturbing a school” a criminal offense. 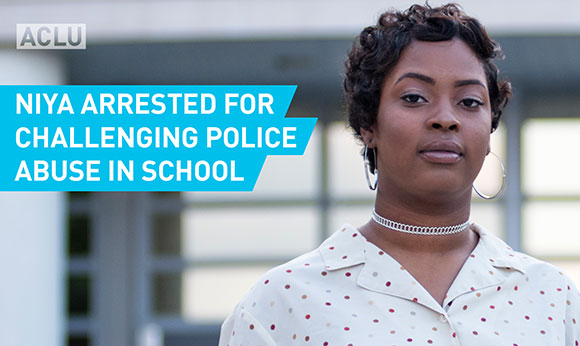 Police Divestment Efforts Must Include Universities