Brutality Against Prisoners Is Often Unseen. In this Virgin Islands Jail, It Was Caught on Video.

When Benjamin Hodge, who is serving a nine-month sentence at the Criminal Justice Complex on St. Thomas in the U.S. Virgin Islands, told a corrections officer he had found a cockroach in his food, he did not expect that officer would choke him to near unconsciousness.

Though the jail’s own chief investigator found that the officer, Jamal Crooke, had used excessive force and lied in his account of the incident, Crooke continues to work at the jail to this day. No criminal investigation was opened into potential assault charges. No known disciplinary action was taken against him.

That’s particularly stunning given the video footage of the confrontation between Hodge and Crooke. We recently showed the footage in federal court in our longstanding lawsuit against the government challenging the horrific conditions and abuse at the jail.

It starts innocently enough: Hodge examines his food and finds a cockroach on his chicken patty. He shows the cockroach to his fellow prisoners and requests a new tray from Officer Crooke, which Crooke provides. A few minutes later, video shows Crooke returning to the unit with a cup of water requested by another prisoner.

As soon as he hands the cup to the prisoner who requested it — and without missing a beat — Crooke launches a ferocious attack on Hodge, who is shown standing nearby, hands by his side. Crooke throws a punch at Hodge with his right arm, and Hodge and Crooke stumble out of view of the camera. Seconds later, they come back on camera, with Officer Crooke using a chokehold — which is prohibited by Virgin Islands Bureau of Corrections policy — to drag Hodge by the neck.

Hodge later stated that he almost passed out from the chokehold. 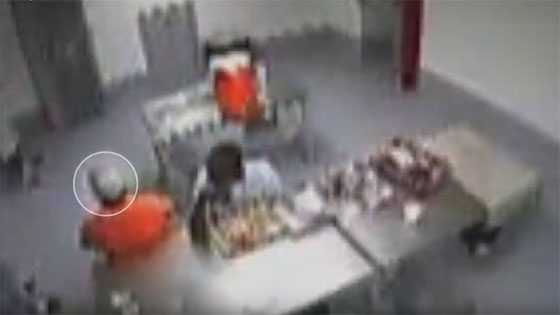 This is the reality of life for the men and women held at the CJC, a dangerous facility where prisoners are subject to violence and inadequate medical and mental health care. Staff at the facility, run by the Virgin Islands BOC, continually struggle to adhere to their own policies, properly investigate security incidents, and discipline problem corrections officers.

Chokeholds are an inherently dangerous, potentially lethal use of force that BOC officers are absolutely barred from using on prisoners. Strikes above the clavicle, like the punch Officer Crooke threw at Hodge, are only authorized if the officer “reasonably believes he/she is in immediate danger of serious bodily harm or death.” This was not the case here.

After the assault, Crooke filed an incident report falsely accusing Hodge of provoking the attack by shoving Crooke. BOC’s own investigation into the assault determined that Hodge posed no threat and gave no resistance to Crooke before he assaulted Hodge. It also found that Crooke used unnecessary and excessive force “in an abusive and punitive manner.”

This is not the first time BOC has had a problem with Crooke: In 2016, he was caught sleeping while on post in a housing unit, armed with a pillow and blanket.

Nor was Crooke the only staff member cited for misconduct in this incident. CJC Security Chief Myron Fredericks was also faulted by BOC’s chief investigator for not completing his required 48-hour review of the incident until 39 days later. The chief investigator found that Fredericks’ review was “off base, regarding [attempts at] de-escalation, cooling off period, [the] type and manner of force used, and medical attention required.” The chief investigator further concluded that “with the aid of the video recording, the use of force incident was clearly outside policy, procedure and training.”

Fredericks, too, has a checkered past at the jail: Two years ago, he failed for 72 hours to order a lockdown of the facility and initiate a search for a missing kitchen knife.

The threats posed to the men and women held at CJC mostly emanate from neglect, plain and simple.

Three years ago, a seriously mentally ill woman who was eight months pregnant was locked down for weeks in her cell rather than being hospitalized, even though she was not eating regularly or taking prenatal medications. She eventually gave birth to her child on the floor of her cell.

A year before that, a mentally ill woman committed suicide at the jail after repeated prior suicide attempts. Two years ago, a prisoner was able to set fire to another prisoner’s cell after the officer on duty abandoned his post.

The cavalcade of lapses would almost be comedic if the consequences were not so deadly.

Benjamin Hodge should not have to fear being brutalized for complaining about a dead cockroach in his food. The men and women held at CJC should be able to trust that BOC officials will investigate misconduct and appropriately discipline any officers who engage in it — and refer to law enforcement cases of potential criminal assault.

It’s part of their job, and their failure is endangering the health and lives of prisoners in their care. Sadly, the video of Benjamin Hodge being assaulted by an officer will likely not be the last of its kind we see from the St. Thomas jail.

Why Are Police the Wrong Response to Mental Health Crises?

Prosecutors Disappoint During the Pandemic