The ACLU of Southern California filed a public records request today demanding more information about the body scanners that the Los Angeles Metropolitan Transportation Authority is deploying in subway stations purportedly to detect terrorists. There are a lot of unanswered questions about these body scanners, which see through clothing to detect objects on people’s bodies. These questions concern numerous privacy and racial equity issues — and ultimately, the question of whether we want remote body scanning to become pervasive in our public spaces.

We wrote about this technology and the questions it raises in March when TSA tested it in New York’s Pennsylvania station. The privacy questions include whether the scanner searches are permissible under the Constitution under California’s very privacy-protective state constitution without a warrant and whether an alarm by one of these scanners is sufficient to justify a demand by a security officer to see underneath a person’s clothes. People carry all kinds of personal effects on and about their bodies, especially in a busy place like a transit hub, and many of those things are very personal: valuables; back braces; medical devices, such as colostomy bags and prosthetics, etc. We should also bear in mind that this technology will likely improve over time in its resolution, clarity, and effective operating distance — and will, therefore, become more intrusive.

There are also serious questions about its effectiveness and whether it survives a cost-benefit analysis. We don’t know what the system’s false positive and false negative rates are, but with all of the things that people carry, it’s likely to be generating constant false alarms. For instance, a German study reported on in 2011 found a strikingly high false positive rate of 54 percent in the use of these scanners. In other words, more than one out of every two items tagged as suspicious turned out to be innocuous. And that was the version used in airports on subjects who are standing still with their arms raised and their pockets empty rather than the free-standing version used here on moving crowds in a chaotic environment. Similarly, the risks of the false negatives — the rate at which these devices fail to detect actual threats — are potentially astronomical as well. In 2017, the Department of Homeland Security's internal watchdog reported that its undercover agents were able to slip contraband through TSA’s suite of security screening protocols in over 70 percent of attempts.

We don’t have anything like sufficient information to suggest that these devices will be effective in preventing mass casualty attacks. The government hasn’t made the results of its tests in Penn Station or elsewhere public. And even if we did have cause to believe they’d be effective, remember that, as security experts have long pointed out, when you harden one target, attackers will simply shift to a softer target. That is especially true of terrorists, who generally don’t care about disabling or degrading a specific facility but are simply interested in creating publicity and terror.

More broadly, this development is the latest to threaten the “airportization of American life.” Under the Constitution’s Fourth Amendment, police officers and other government agents ordinarily can’t search you without a warrant supported by probable cause. The courts have accepted an “administrative exception” to that requirement for the narrow purpose of detecting weapons and explosives that might be brought aboard aircraft. One of the questions raised by the Los Angeles body-scanner deployment is whether we’re going to allow that narrow exception to our privacy rights to be wedged wide open into a world where we are constantly searched as we circulate throughout our public places, effectively rendering the Constitution’s protections meaningless.

Los Angeles’ Union Station, for example, contains numerous restaurants, houses art exhibits, hosts weddings, and attracts tourists to view its renowned architectural elegance. New York’s Pennsylvania Station, where this technology was also tested, is similarly a contiguous part of New York City’s public spaces, with plentiful entrances and exits and numerous stores and restaurants. Neither are anything like the secured area of an airport. It’s hard to imagine that even with hundreds of body scanners installed throughout these stations, such scanning would be at all effective in detecting a sole bomber from among the 700,000 people who flow in and out of the two sprawling complexes each day.

TSA Administrator David Pekoske told reporters of the deployment, “We will not have a repeat of 9/11 or any terrorist incident inside our transportation systems in the United States.” As far as the Los Angeles subway goes that’s fairly certain because you can’t drive a subway train into a building. Mass transit facilities are far more like regular public spaces than they are like aircraft. Aircraft are uniquely structurally vulnerable to attack, uniquely terrifying to passengers contemplating such attacks, and uniquely able to be weaponized against ground targets.

Our domestic security bureaucracies will, like the Sorcerer’s Apprentice, mindlessly press forward with their task beyond any point of reasonableness. That is the nature of bureaucracies, which, as we have argued elsewhere, are best thought of as mindless organisms with certain common characteristics. They will carry out their task of stamping out any risk of attack, no matter how small, without regards to cost, proportion, or damage to other values.

The continued occurrence of mass shootings may also be taken up by our security bureaucracies as additional fuel for the construction of a “checkpoint and search” society. Officials at the launch of the Los Angeles scanners cited guns as another justification for these searches. But consider the ever-increasing calls for security checkpoints, metal detectors, randomized searches, and onerous backpack policies at schools in the wake of any school shooting. The security apparatus’ response to the epidemic of school shootings is to turn schools into fortified bunkers rather than to invest time and resources into student programming, school supplies, teachers, restorative justice, student support, and mental health care — all of which actually may stand a chance of preventing an attack.

Los Angeles Metro’s acquisition of scanners raises another troubling reality: racially biased policing. These devices only identify potential risks. The officers tasked with operating them follow up on alarms by determining whether an individual deserves additional scrutiny, questioning, or detention. As research has proven, the insertion of line-level discretion in policing introduces racial bias in enforcement decisions. The use of body scanners threatens to exacerbate these disparities. If an officer is unsure about whether to question an individual who may have a suspicious device, they will inevitably be more likely to do so if the person is a Black man than a white woman. Worse still, these scanners may provide officers with an “objective” basis to carry out a racially pretextual stop that they might not otherwise feel legally entitled to do.

In short, for all the specific unanswered questions raised by the Los Angeles subway deployment, which we are trying to get answers to today, the big question is whether we are going to go down the road of subjecting Americans to remote automated searches at every turn. The security bureaucracies and device manufacturers will be pushing for it, but that’s not how Americans should have to live.

Why do they need scanners in Subway? All they do is sell sandwiches.

Thank you, ACLU! We the people support you and your mission. Thank you for standing up for American values and standing against the relentless march towards total subjection by the security state.

Remote automated searches, a novel term for invasion of privacy as a trade-off for low cost security to provide safety of the masses. I was thinking years ago, radar on automobile bumpers would reduce accidents though a tone-visual alarm signal to the driver (now we have rear-view video). When I was a kid, cars had this little metal rod extending from the rear tire well, that made a scraping sound when you got to close to the curb while parking -- but now I just jack-up my tire rims when I cut sharply into the curb. So remote automated searches could be used in pursuit of vehicles, it could be used at border crossings, it could be used at CACs at entry locations for secured sites. It's evasive, meant to provide a bubble of security extending to search everyone. Seems the rule of thumb is, everyone is guilty in proximity of the scan until proven innocent by the scan -- because there's just too much of a chance someone in society will cut sharply in some stupid way and jack-up the place.

Remember that movie total recall with that full body scanner that looks for weapons. Its funny because real terrorist don't show boat they just kill. No beauracracy or amount of laws can stop a terrorist. Its a joke but the people believe the lies

How will investing in school supplies prevent an attack?

The reason the Penn Station results haven't been released is that they showed just how useless the technology really is.

If they had gotten the data they wanted, they'd be trumpeting it. 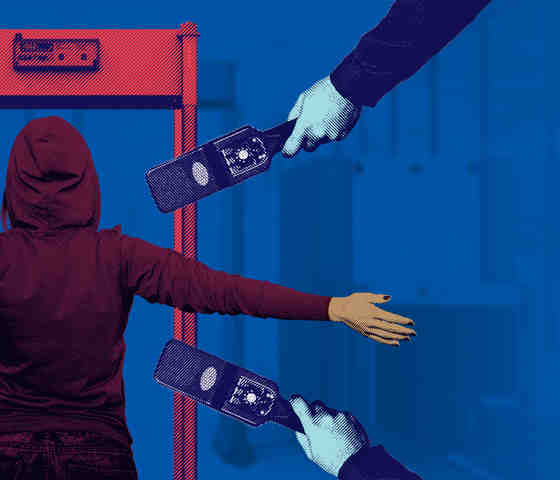