When Lt. Maysaa Ouza began her first assignment as an officer in the Air Force’s Judge Advocate General’s Corps earlier this month, it was a historic moment. Lt. Ouza, a recent law school graduate, became the first Air Force JAG Corps officer authorized to wear hijab. Before she enlisted, the Air Force granted her a religious accommodation allowing her to wear hijab during basic and officer training and in her role as chief of legal advice at Scott Air Force Base.  The groundbreaking development was a long time in the making.

Lt. Ouza always knew that she wanted to serve her country. As the daughter of immigrants, she was called to give back by defending the very freedoms and liberties that have afforded her and her family so many opportunities.

When Lt. Ouza was in law school and began investigating her options for military service, however, there was one potential obstacle: her hijab. For Lt. Ouza, the practice of covering her hair and neck by wearing hijab reflects a core tenet of her Muslim faith. She believes that being forced to remove the head covering is humiliating and no different than being compelled to strip in front of others.

After being told by Air Force officials that she could seek a religious accommodation, Lt. Ouza continued to pursue her dream of military service, applying to the highly competitive and selective JAG Corps. By all accounts, she was an excellent candidate, and the Air Force approved her application. 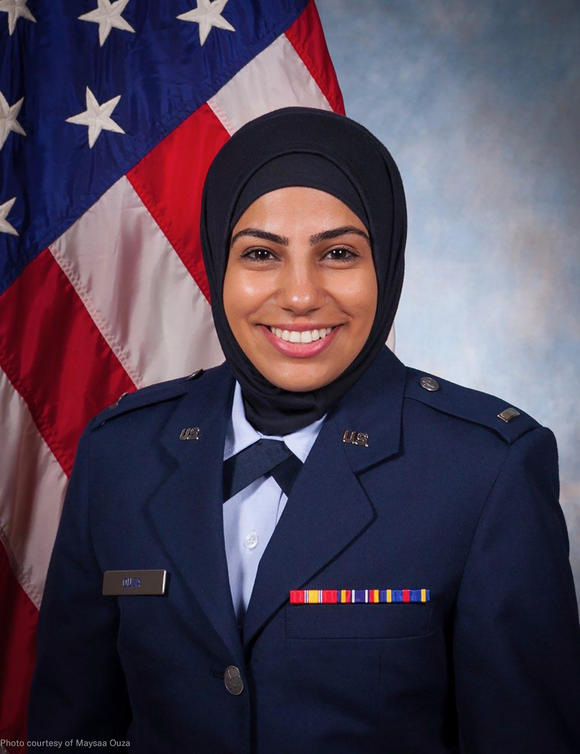 But when it came time to accept a place in the JAG Corps, Lt. Ouza was informed that she could only request a religious accommodation after formally enlisting and contractually committing years of her life to military service. She would have to remove her hijab and begin basic training without the head covering, and she could only resume wearing hijab if and when she was granted a religious exemption to the rules. Failure to do so could mean disciplinary action.

Highlighting the court’s decision in that 2015 case, the ACLU, ACLU of Michigan, the ACLU of the District of Columbia, along with the law firm of Hammoud, Dakhlallah & Associates PLLC, sent a letter to the Air Force on behalf of Lt. Ouza urging officials to reconsider their policy. To the credit of the Air Force, they reversed their decision and allowed Lt. Ouza to join the JAG Corps with a religious accommodation. They also took steps toward approving and implementing a new policy that, once finalized, will hopefully help future recruits who need religious exemptions avoid the same dilemma. 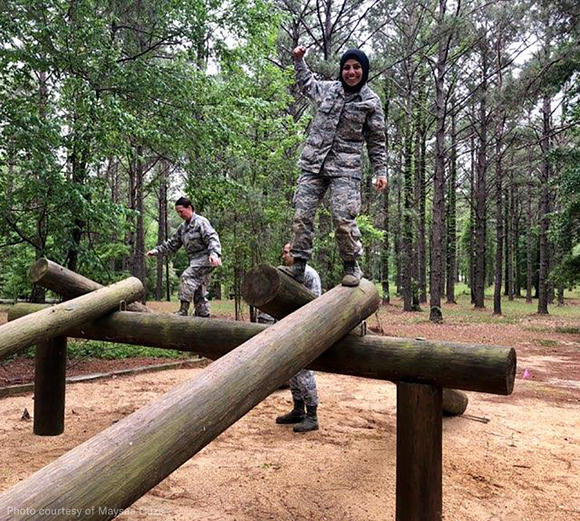 The Air Force gained a stellar new officer. Lt. Ouza successfully completed her basic training and officer training while wearing hijab. She was even awarded the “Airman of the Week” honor by her fellow trainees and instructors who described her as “a true leader who will greatly contribute to the Air Force and anything she pursues.” And, in July, she will attend further training in Alabama, where she will be promoted to captain upon graduation in September.

Lt. Ouza has embarked on an exciting new career, achieving her long-held dream of serving and giving back to others. Her accomplishments and contributions show that religious diversity in the military only makes our country stronger.

Congressional Action to End the Bans—Now and Into the Future

Senators Must Hold Mike Pompeo Accountable For His Religious Prejudice