Over the last several months, volunteers for the ACLU’s Rights for All campaign have been fanning out across the first four primary states asking all of the 2020 presidential candidates a straightforward question: Will you commit to cutting the nations’ prison and jail population in half?

That question has never been more urgent, with the United States incarcerating more people than any other country in the world. Mass incarceration has destroyed communities, deepened racial injustice, and wasted dollars that could have been spent investing in local communities, all without making our neighborhoods any safer.

But some of the presidential candidates initially balked at the question. “I want to do a little math on that,” said Pete Buttigieg when asked by an ACLU volunteer to pledge to a 50 percent cut. Similarly, Joe Biden initially told our volunteer that cutting the incarcerated population in half was “arbitrary” and “not a rational way of going about it.”

The truth is that the U.S. could cut incarceration by half and still have more people locked up than any other country in the world.  And it could do so safely — over the last 10 years, 27 states have reduced both incarceration and crime rates.

The ACLU just shared a “Presidential Roadmap for Ending Mass Incarceration” with all the presidential candidates. The Roadmap contains dozens of different policy reforms that would each slash the number of people locked up at every point in the process, and combined would reduce the overall incarcerated population by far more than 50 percent.

The Roadmap includes reforms addressing the front end of the criminal legal system, like policing and prosecutors, all the way to changes to parole and re-entry at the very back end, and everything in-between. The Roadmap also allows every presidential candidate to put together their own plan that would reach the 50 percent goal.

Reforms in just these four areas would reduce incarceration by half: 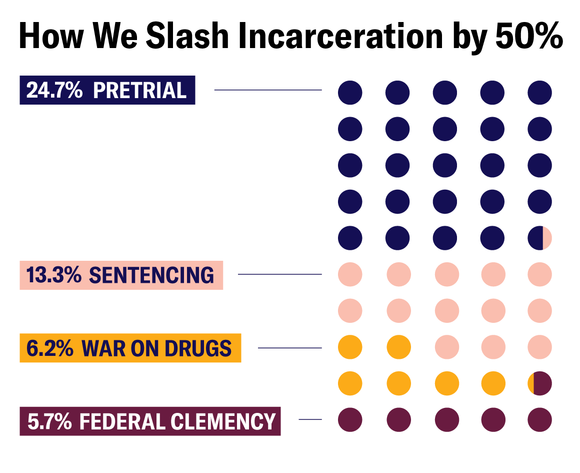 The numbers do add up. And you don’t just have to take the ACLU’s word for it.

After our initial request to Pete Buttigieg, he since committed to our 50 percent goal, agreeing that “This is not a random target, but the hard math on how many Americans should not be locked up in the first place.” This week, Joe Biden also agreed, telling an ACLU volunteer that he would, in fact, commit to reducing incarceration in half and that he’s  put together a plan that will go further than 50 percent.

Buttigieg and Biden join a growing number of presidential candidates who have now committed to reducing incarceration by half. As have Cory Booker, Julian Castro, Tulsi Gabbard, Wayne Messam, and Beto O’Rourke. We will keep asking until every presidential candidate has made the same commitment.

Other candidates, like Kirsten Gilibrand and Marianne Williamson have made the pledge, but the policy reforms they've endorsed--like abolishing private prisons and decriminalizing marijuana--are important but would have almost no impact on decarceration. Our Roadmap will help them better understand which reforms can make their commitment to a 50% reduction a reality.

Once all candidates recognize that 50 percent is not only rational and achievable, but urgently necessary, we will start checking their homework to see if their math adds up. Our next president must take many more steps to ending America’s shameful era of mass incarceration.