By Bonsitu A Kitaba-Gaviglio, Staff Attorney, ACLU of Michigan
Tags 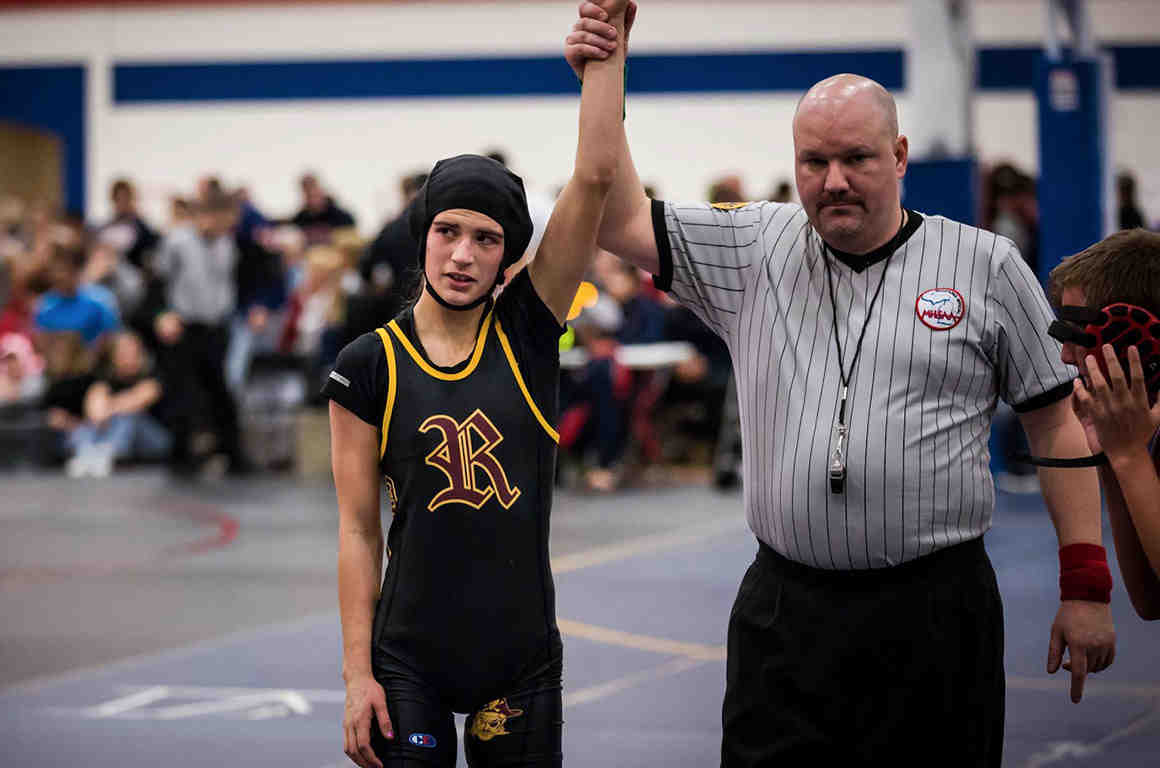 Marina Goocher just wants an equal opportunity to wrestle in the National Collegiate Wrestling Association. The NCWA’s response: Build your own women’s team.

Goocher, a national champion college wrestler in her junior year, is a favorite to win another national championship in a few days. Yet she has been benched for the entire last three regular seasons in her wrestling league, the National Collegiate Wrestling Association (NCWA). Despite the male team at University of Michigan-Dearborn having abundant opportunities to train and attend NCWA competitions throughout the season, NCWA rules prohibit Marina from wrestling.

The problem: Not only are there no other women on Marina’s college team, there are also no other women wrestlers in the entire Midwest conference. The NCWA says women in Marina’s position can’t compete or practice with men on her team — even if it means she has to sit out the entire season.

All Marina wants is a chance on the mat. So she called on the ACLU and its partners for help. Along with the National Women’s Law Center and the Women’s Sports Foundation, the ACLU wrote a letter in October last year to the NCWA urging it “to change the rules of the college-level club wrestling association” so Goocher can compete against male wrestlers during the regular club wrestling season.

The letter explains that the NCWA deprives Marina of an equal opportunity to wrestle, which is both discriminatory and opens up NCWA member schools to liability. The NCWA’s response: too bad. It then NCWA accused Marina of laziness.

“It seems as though Ms. Goocher has been content to do nothing,” the NCWA wrote in November, “instead expecting the competition to come to her, and demanding other individuals do the hard work it takes to build a competitive clubs team program.”

The NCWA’s response to Marina deflects attention away from its mission as a national organization founded to create equitable opportunities for all of its wrestlers regardless of their gender. Instead, it blames one of its star athletes for her predicament. It is simply unfair to say women collegiate wrestlers bear the sole burden of ensuring women have equal opportunities as men in a wrestling association with such broad reach and resources.

And even if Marina could recruit, train, and develop a full women’s team at her university, who would this hypothetical women’s team compete against? There are no other women’s teams in their conference, and the NCWA rules prohibit them from wrestling male teams.

To be clear, Marina’s case is not about women wanting to wrestle men. It is about having an equal opportunity to compete against the competition available to you. None of the opportunities the NCWA puts forth as alternatives for Marina is actually equivalent.

For example, the NCWA listed nine events which Marina could have chosen to attend. None of them are NCWA competitions. Rather they are open competitions where anyone can attend regardless of age or ability. Marina, remember, is a national champion.

Furthermore, only two of the open tournaments are located in Michigan and the remaining tournaments would require her to travel as far as Minnesota, South Dakota, or Wisconsin. Essentially, if Marina were forced to pursue these alternative “opportunities,” as the NCWA puts it, she would have to expend exponentially more resources and time than her male teammates to travel across the country every weekend. This is not exactly the definition of equal.

The NCWA has even gone so far as to criticize Marina for choosing to attend UM-Dearborn instead of other institutions that may have larger women’s teams. Again, the NCWA can’t wiggle out of its obligation to provide equal opportunities to both men and women by putting the onus on individual students to attend schools that have women’s teams. Marina had plenty of reasons to attend U-M Dearborn, like its engineering program, and the NCWA should ensure that female athletes have equal opportunities to wrestle no matter where they choose to attend college.

As the ACLU, WSF, and NWLC have explained in response, Marina’s objective is to ensure that women and men have equal time on the mat until the sport of wrestling recruits and engages more women. But until there are enough women’s teams to create equal opportunities for women wrestlers, Marina, and women like her, must be given a chance to compete against men for a spot on the school wrestling team and compete in matches against men during the regular season. Anything less is discriminatory and wrong.

Ruling In Horrific LGBT Bullying Case Should Be A Wake-Up Call For Congress...