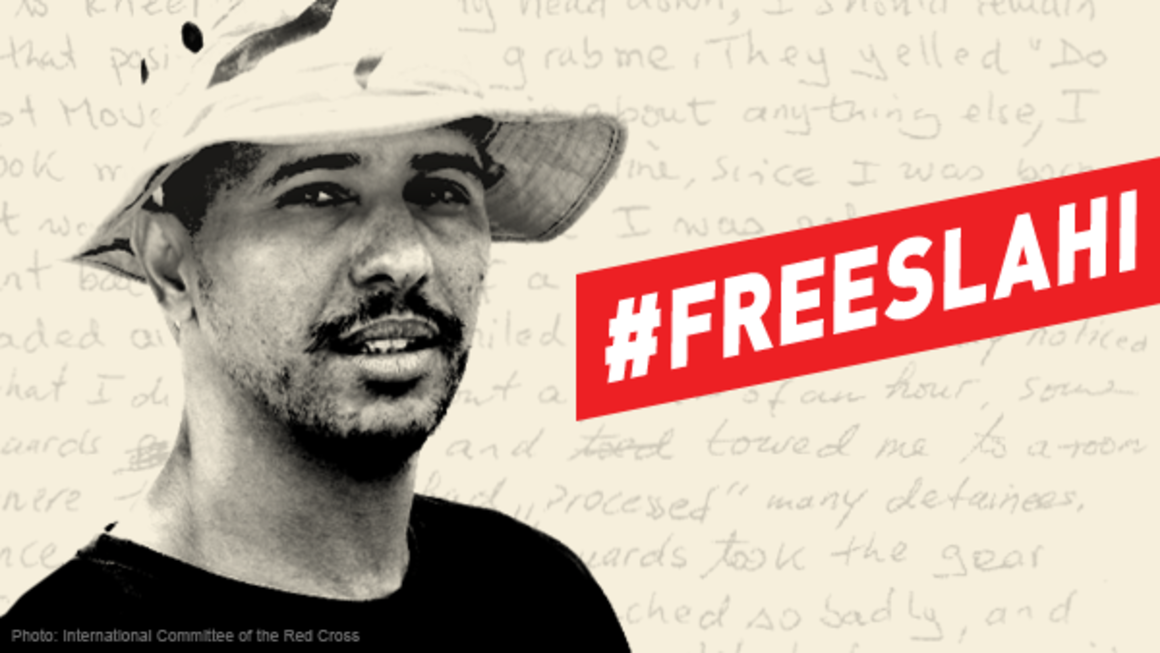 Mohamedou Ould Slahi (sometimes spelled "Salahi") is a Mauritanian national who was illegally detained by the U.S. for more than 14 years. On October 17, 2016, Mr. Slahi was released and transferred back to Mauritania, where he was reunited with his family. Mr. Slahi was arrested in Mauritania in November 2001 on suspicion of ties to al-Qaeda. He was then illegally rendered by the U.S. government to Jordan, where he was detained, interrogated and abused for eight months. He was subsequently rendered to U.S. custody in Bagram, Afghanistan and finally to Guantánamo, where he was held from August 2002 until his release.

At Guantánamo, Mr. Slahi was held in total isolation for months, kept in a freezing cold cell, shackled to the floor, deprived of food, made to drink salt water, forced to stand in a room with strobe lights and heavy metal music for hours at a time, threatened with harm to his family, forbidden from praying, beaten and subjected to the “frequent flyer” program, during which he was awakened every few hours to deprive him of sleep. The government falsely told him that his mother had been arrested and was being sent to Guantánamo. His abuse was confirmed and well documented in a 2009 report by the Senate Armed Services Committee that investigated allegations of detainee abuse at Guantánamo. In fact, the military lawyer originally assigned to prosecute the case against Mr. Slahi in the military commissions, Marine Corps Lt. Col. Stuart Couch, determined that the statements wrung from Mr. Slahi during his interrogations were so tainted by torture that they couldn’t ethically be used against him. Ultimately, Col. Couch told his supervisors that he was “morally opposed” to Mr. Slahi’s treatment, and refused to participate in the prosecution.

In 2009, the ACLU joined Mr. Slahi’s legal team of Nancy Hollander and Theresa Duncan of Freedman Boyd Hollander Goldberg Ives & Duncan P.A. and Linda Moreno of Linda Moreno P.A. in a habeas corpus petition challenging the basis of his detention, arguing that the government had no reliable evidence that he was part of al-Qaeda when he was seized in 2001. In March 2010, a federal judge ruled that the U.S. could not continue to detain Mr. Slahi. The judge found that allegations that Mr. Slahi participated in the so-called Millennium Plot to attack the Los Angeles airport and that he recruited two of the 9/11 hijackers were not supported by any credible evidence. The judge ultimately concluded that there was no basis for the government’s contention that Mr. Slahi was part of al Qaeda and thus ruled that he could not be detained indefinitely.

In July 2016, the Periodic Review Board, composed of U.S. national security, intelligence, and other officials, cleared Mr. Slahi for release after determining that he poses no significant threat to the United States. On October 17, 2016, the U.S. government transferred Mr. Slahi to his native Mauritania, where he was reunited with his family.

Read More on SLAHI'S BEST-SELLING MEMOIR, “gUANTANÁMO DIARY,” AND the Campaign to Free HIM