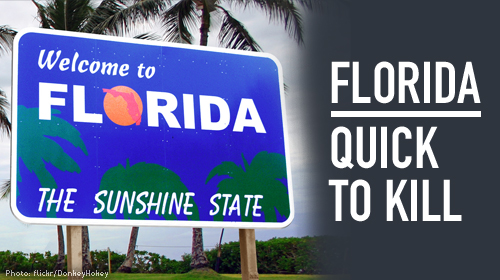 Angela Corey is certainly making a name for herself. Not only has she worked to send more people to death row than any other state’s attorney in the Sunshine State, but she leads the pack nationally as well.

We’re all used to hearing stories about the madness that passes for criminal justice in Florida. Headlines like “Florida Man Wanted for Peeing on Gators Fans” are so funny they have their own dedicated Twitter feed. Much less hilariously, Marissa Alexander, a Black domestic violence survivor, was sentenced to 20 years for shooting a gun to scare off her abusive husband, hurting no one. (Corey—of George Zimmerman and Michael Dunn fame, it should be known—was also responsible for prosecuting Alexander, and is now seeking a 60-year sentence in the new trial.)

Simply put, when Corey chooses who the state should kill, she has been targeting African Americans. She has sent 21 men to death row in four years: 14 of whom are African American – a wildly disproportionate rate given murder statistics. In the state of Florida, where no white person has ever been executed for killing an African American, Corey’s discriminatory prosecution practices reinforce this shameful and unjust death-sentencing tradition.

Under Corey’s reign, things are even worse than they were during Jim Crow. Since 2009, 66 percent (and rising – two defendants are currently pending final sentence) of people sentenced to death under Corey’s watch were African American. During Jim Crow, from 1924 – 1964, African Americans made up 65 percent of those sentenced to death in the Corey’s Circuit. And that’s in a state that’s 16 percent Black.

For many members of communities of color, years of being ignored and receiving second-class treatment have brought things to a boiling point. And deservedly so. But the recent request from some local Black ministers to increase death-penalty prosecutions so people of color and white people are being targeted for death at more comparable rates is not the answer. We need more justice, not more death. A more humane response to violent crime is well-tested, effective crime prevention and public safety programs, including supporting community crime prevention programs that work; providing services for the victims of violent crime and their families, including murder victims’ families; and funding investigation of unsolved crimes – not only for white victims, but for all victims.

We can’t let Corey’s killing spree continue without oversight—as it has for far too long. Obviously, the best solution would be to do away with Florida’s lethally flawed death penalty system entirely. But in the meantime, a more transparent and publicly accountable process for seeking the death penalty is the answer. A review committee, similar to those in other capital jurisdictions, to approve death-seeking decisions could ensure the public that the death penalty is only sought for the “worst of the worst” and in a non-discriminatory manner.

With unfettered resources, and without oversight, Angela Corey will continue on her tax-dollar-subsidized killing spree.