A Good Ride from Death Row 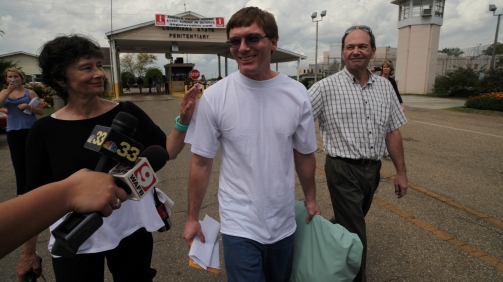 Friday morning, September 28th, Damon Thibodeaux woke up on Death Row. By early afternoon he was a free man, walking out of Louisiana State Penitentiary after 16 years imprisonment for a crime he did not commit. He was the 141st person exonerated after being sentenced to death.

Damon was my client for 14 years. I had visited him for many years, me the lawyer, him the client. Me in a suit, him in belly chains. On Friday, Damon my friend sat unencumbered in the front seat of my car as we drove away from the prison better known as “Angola” to the world outside and usually called “the farm” by its inhabitants. When the deputy warden and the guards at the front gate called him “Mr.” Thibodeaux and shook his hand, Damon replied, “Goodbye – hope we never meet again. No offense.”

Damon’s conviction came about because he confessed. False confessions are one of the leading causes of wrongful conviction, and remain puzzling to a lot of people, who – inaccurately – believe they could not be made to confess to a crime they had not committed. For more on what we know about the causes and prevention of false corrections, read my op-ed in the New Orleans Time-Picayune.

Damon’s confession came at the end of nine hours of police interrogation; he was exhausted when it began and beyond confused when it ended in a confession that was riddled with mistakes of fact, and contained only information he had received from the police or conjecture about a tragic homicide that he had neither witnessed nor committed. The question that is always asked in these cases is “Why would an innocent man confess?” In Damon’s case, the better question is “Why would the police believe this confession?”

The confession fell apart once we started investigating it; the timeline of the crime showed it could not have been Damon who murdered his young cousin, Crystal Champagne; and finally, forensic evidence, properly tested, demonstrated to the prosecutors of Jefferson Parish that Damon was innocent.

The defense team in this case grew to include the ACLU Capital Punishment Project, the Innocence Project, and – thanks to the ABA’s Death Penalty Representation Project – many members of Fredrikson & Byron, a law firm in Minneapolis that donated considerable time and money to Damon’s exoneration. In the anxiety-filled last weeks and months, there were hundreds of emails and many daily phone calls among members of the team as we waited for word that he would be released. The prosecutors had been convinced of Damon’s innocence, and yet delays continued. On a conference call with Damon in August, one of the attorneys said to Damon, “I hesitate to tell you once again that it will be soon;” he replied, “`Soon’ done come and gone.” We edited and revised many editions of pleadings. None of us got a lot of sleep.

I visited Damon twice before the day of his release, taking that five-hour round trip from New Orleans to Angola. One visit was a special Sunday meeting – rarely granted to attorneys. Waiting for my escort to get to the front gate so I could follow him to Death Row, I realized one reason why I had been feeling so worried and upset: the late nights up reading the record, the hours on the phone with other legal team members, and above all the special visits to Death Row – this felt like the week leading up to an execution. Every other time I had taken that drive, the trip back was the worst: after our efforts had failed. It wasn’t the drive to Death Row that was so bad, it was the drive from the prison, with another person gone by official homicide, with more instead of less violence in the world, and with the world a little worse for it.

I don’t hope that all my rides from Death Row will be as good as the ride with Damon Thibodeaux. I hope there aren’t any more.