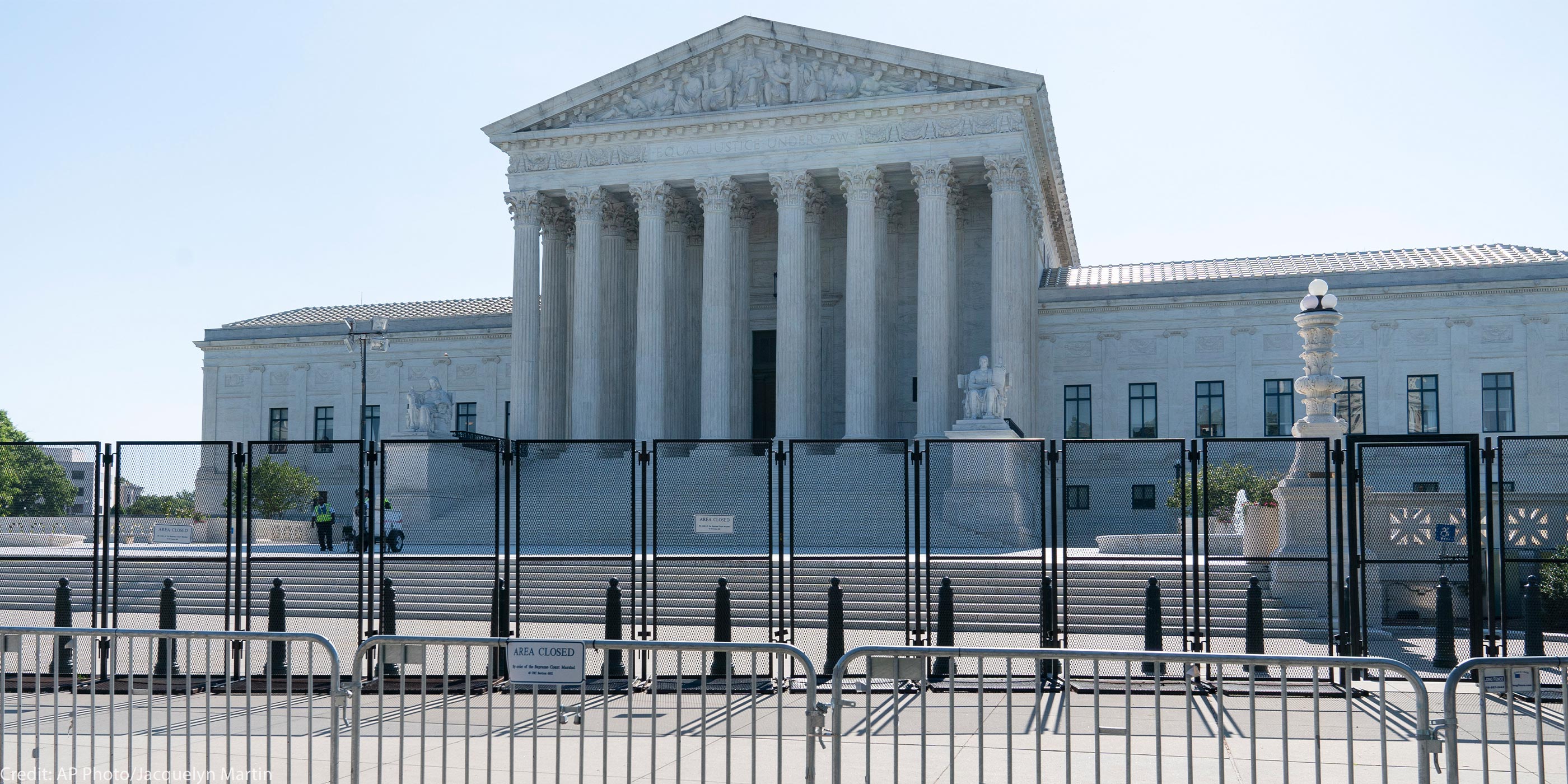 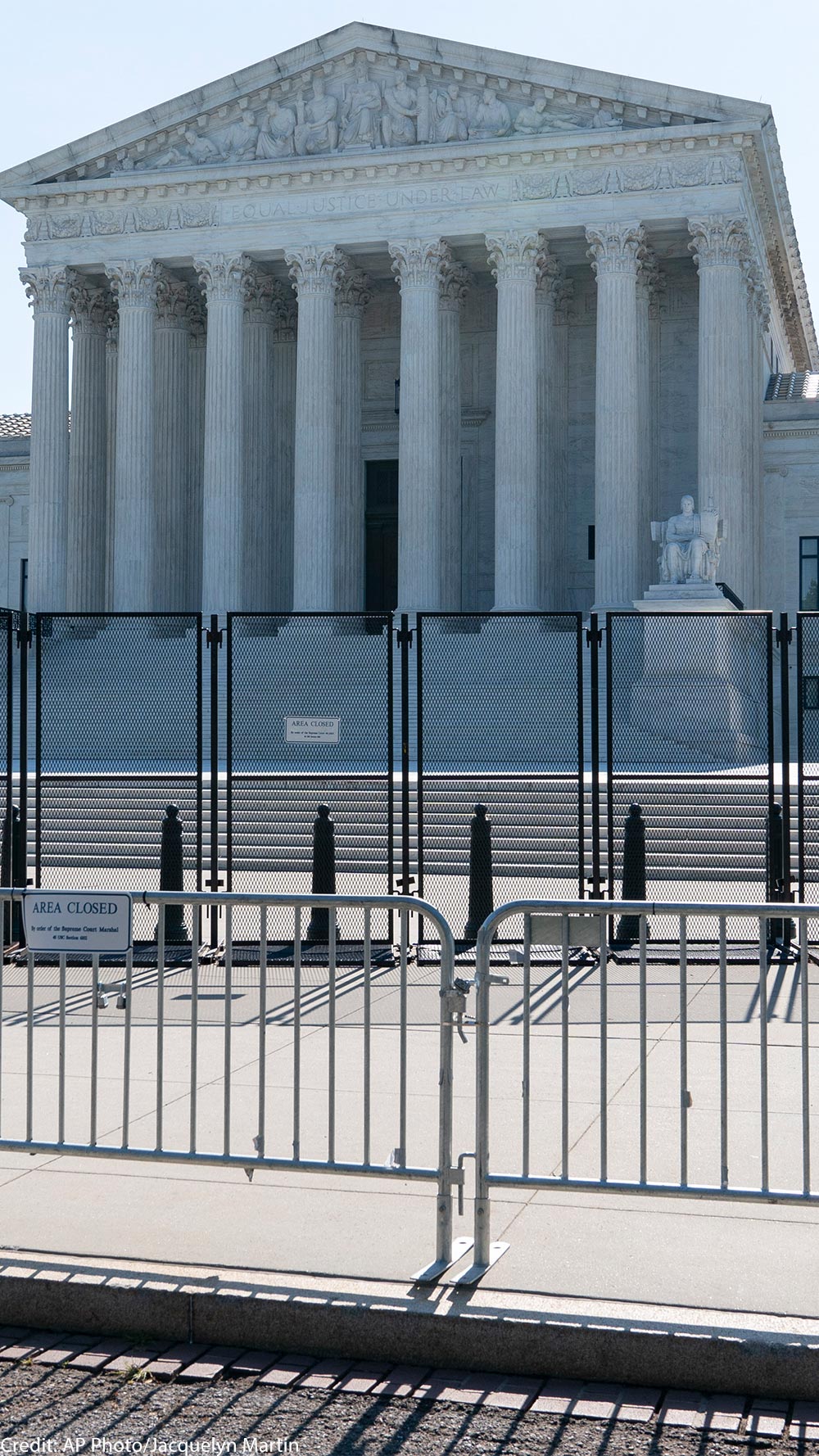 The recently completed U.S. Supreme Court term was the most conservative in a century, as President Trump’s three nominees exercised their newfound power to turn the law radically to the right. The ACLU was involved in many of the court’s most consequential cases, including on abortion, religious liberty, criminal defendants’ rights, voting rights, and free speech. Here is a brief summary of the court’s major civil liberties and civil rights decisions.

The Supreme Court overturned Roe v. Wade — the landmark decision recognizing the federal constitutional right to abortion nearly 50 years ago. The decision marks the first time the court has eliminated a right so central to the equality and autonomy of half the nation. It will allow anti-abortion politicians in states across the country to ban abortion and force countless people to remain pregnant and have children against their will. As we continue to fight in court, often employing state constitutional arguments, the ACLU will mobilize supporters across the country to take to the streets, lobby their representatives, and head to the polls in defense of the right to abortion.

The ACLU, along with Planned Parenthood and the Center for Reproductive Rights, challenged a novel Texas law that banned abortion after six weeks of pregnancy, a blatantly unconstitutional law at the time, but assigned the power to enforce the law to private citizens rather than state officials in an attempt to evade federal court review. Ordinarily, one would challenge such a law by suing the state officials charged with enforcing it. But the Supreme Court ruled that because no state officials were authorized to enforce it, no suit could be brought to block the law in advance. Because the law imposed draconian financial penalties, it had the effect of shutting down all abortions after six weeks of pregnancy in Texas.

The Supreme Court sided with a public-school football coach who demanded the right to pray after games at the 50-yard-line. The decision significantly erodes the separation of church and state in public schools. The ACLU and the ACLU of Washington filed an amicus brief in the case, arguing that the school had a right under the Establishment Clause to stop Kennedy’s prayers, out of concern that they would be seen as carrying the school’s imprimatur, and risked coercing students to pray to play.

The court ruled that the state of Maine was constitutionally compelled to use taxpayer funds to support private religious schools, even where they engage in indoctrination, as long as the state supported private secular schools. Maine offers residents who live in rural areas that do not have a public school subsidies to send their children to private schools, but excluded those that engaged in religious indoctrination. The ACLU filed an amicus brief supporting the practice, on the ground that using government money to support religious schools raised serious Establishment Clause concerns. The case turns the religion clauses on their head, compelling what was once prohibited: official support of religious indoctrination.

The Supreme Court struck down New York’s restriction on concealed carry and eroded the legal basis for gun regulations, ruling that states can regulate guns today only if they can point to similar laws in the 18th and 19th centuries — even though the threat of gun violence today differs markedly from those eras. Justices Kavanaugh and Roberts made clear, however, that in their view, states could impose various prerequisites before granting a public carry permit, including background checks and training requirements, as long as they restrain licensing officials’ discretion. The New York Civil Liberties Union and the ACLU submitted an amicus brief in the case, arguing that the unregulated carrying of weapons in public undermines the sense of safety required for an open, healthy democracy, and that state and local governments have long imposed strict regulations on the public carrying of guns.

The Supreme Court ruled in Vega v. Tekoh that a person cannot sue a police officer under federal civil rights laws for violating their Fifth Amendment right against self-incrimination by failing to provide a Miranda warning. The ACLU, which represented Ernesto Arturo Miranda in the 1966 Miranda v. Arizona case, filed an amicus brief in the case in support of Terence Tekoh, who was illegally interrogated without Miranda warnings. With this decision, the court further widens the gap between our constitutional guarantees and our ability to hold government officials accountable for violating them.

The Supreme Court dealt a blow to federal police accountability in Egbert v. Boule, when it ruled that Border Patrol officers cannot be sued for damages when they violate constitutional rights. The case, in which the ACLU filed an amicus brief, involved Robert Boule, who runs a bed-and-breakfast on the U.S.-Canada border. Boule sued Border Patrol agent Erik Egbert for damages for violating his rights under the First and Fourth Amendments to the U.S. Constitution. The court ruled in a 6-3 decision that Boule is not entitled to seek financial damages for the harm caused by Egbert’s excessive force and retaliation, even assuming Egbert violated the Constitution. The ruling further limits people’s ability to hold Border Patrol agents accountable in court, and undercuts an important deterrent to misconduct.

The Supreme Court ruled that the Equal Protection Clause does not require Congress to extend Supplemental Security Income benefits to residents of Puerto Rico on the same terms as all other U.S. citizens. The ACLU and our partners filed an amicus brief urging the court to rule that residents of Puerto Rico, and residents of all federal U.S. territories, are entitled to equal protection under the U.S. Constitution, and that this law violated equal protection.

The Supreme Court ruled that the government may assert the state secrets privilege in defending a case alleging unlawful surveillance targeted at Muslims based on their religion. Decades ago, in the Foreign Intelligence Surveillance Act, Congress established protections for people challenging abusive spying in court, and the ACLU argued that that statute superceded the state secrets privilege. The court rejected that argument, making it much harder for those who have had their rights and privacy violated by discriminatory surveillance to prove their claims in court.

This case addresses whether the Immigration and Nationality Act requires the government to provide a bond hearing to demonstrate the need for detention before detaining immigrants for more than six months during immigration proceedings. The Supreme Court ruled that the federal immigration statute does not require such hearings, regardless of how long proceedings take. But it left open, to be decided by the courts below, whether the Due Process Clause requires such hearings. There is no more fundamental due process principle than that the government cannot lock someone up for months or years without a hearing.

The Supreme Court allowed the Kentucky Attorney General Daniel Cameron to intervene on appeal in this case in order to continue his eleventh-hour attempt to revive an abortion ban that two courts had held unconstitutional. While continuing to defend our prior victory in federal court, last week the ACLU, ACLU of Kentucky, and Planned Parenthood Great Northwest, Hawaiʻi, Alaska, Indiana, and Kentucky filed a state court challenge seeking to block two abortion bans, asserting the Kentucky Constitution protects the right to privacy and bodily autonomy.

In Shurtleff v. Boston, in which the ACLU filed an amicus brief supporting Camp Constitution, a fundamentalist Christian group, the court ruled that Boston violated the First Amendment when it selectively refused to allow a Christian group access to temporarily fly the group’s flag in front of City Hall. For more than a decade, Boston approved nearly 300 applications to fly private flags on its flagpole without denying a single applicant — until Camp Constitution sought to fly its Christian flag. While recognizing that the display of a religious flag on government property typically would violate the Establishment Clause, our brief argued, and the court agreed, that where a city turns its flagpole into a public forum for all comers, it can’t turn away a flag simply because it is religious.

Does the Constitution require an individual facing the death penalty the right to have his minister present, praying and laying on hands, in the execution chamber? The Supreme Court ruled that it does. The ACLU filed an amicus brief in the case on behalf of ministers who had done precisely that during executions, and former prison wardens, who had overseen dozens of executions and argued that the individual’s religious freedom could be honored consistent with security concerns.

Rejecting an effort to block an ACLU voting rights victory, the Supreme Court denied a request to stop the counting of 257 timely received mail ballots in Lehigh County, Pennsylvania. The ballots had been held up and not counted because they lacked a handwritten date on an outer return envelope. But that date made no difference to the validity of the ballots, which under law were valid if received by election day. Every vote matters, and every valid vote should be counted. As a result, these voters finally had their ballots counted, as required by federal law.

Georgia death-row prisoner Michael Nance learned that, due to his unique medical conditions, which had developed over many years of living on death row, his execution by lethal injection would likely be torturous, in violation of the Eighth Amendment’s prohibition against cruel and unusual punishment. The ACLU and our partners filed an amicus brief in support of Mr. Nance, arguing that, contrary to the Eleventh Circuit’s reasoning, individuals facing execution should be allowed to challenge the method of their execution under 42 USC 1983, and are not restricted to habeas review (which imposes strict limits on such claims in most cases). The Supreme Court in a 5-4 ruling sided with Michael Nance and the ACLU.