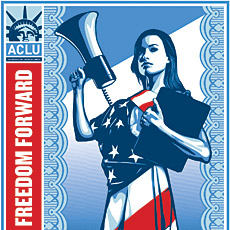 We’re also celebrating the end of our Leading Freedom Forward fundraising campaign, which brought in $407 million in cash and planned gifts. This campaign was the biggest fundraising campaign in our 90-year history. To celebrate, we commissioned this Shepherd Fairey poster with actress Olivia Wilde. Aside from being a super-cool actress starring in House, Olivia’s also an activist and civil libertarian. She said of the ACLU:

I believe we have to judge our society not by how we treat the privileged and the empowered, but by how we treat the silenced, the condemned, the undocumented, and all those whose views and rights are deemed inconvenient. The ACLU works tirelessly to uphold the promise of the Constitution, and I am proud to support their courageous and necessary work.

Last week, the ACLU’s executive director Anthony Romero was on The Colbert Report, and mentioned a few of the ACLU’s greatest successes over the past 90 years. You can learn about those cases and much more in our ongoing fight for our constitutional rights by checking out a special traveling exhibit that’s making its way across the country. See the schedule here. And you might luck out and get a special ACLU Silly Band — but only if you show up to the exhibits in person.

But if it’s not coming to a town near you, you can experience the exhibit online at our special anniversary website, www.aclu90.org.