How Ruth Bader Ginsburg Got Her Start at the ACLU 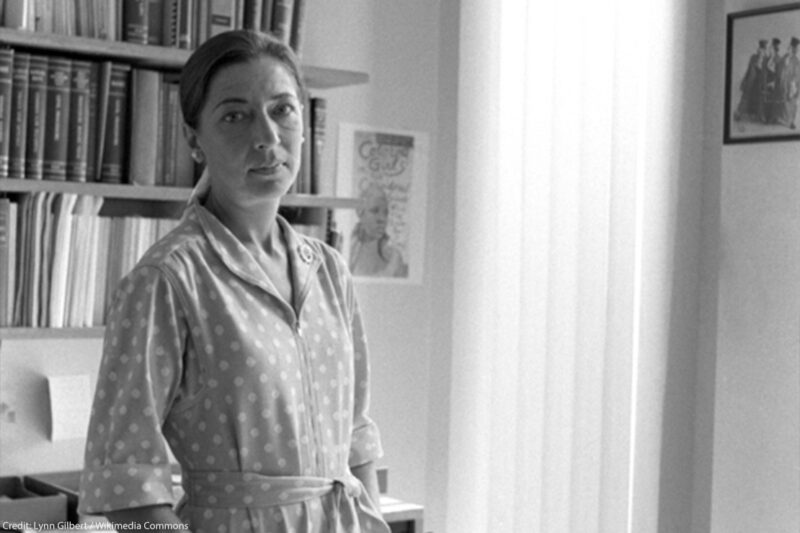 Before she became a Supreme Court Justice, Ruth was a mother, a law professor, and the founder of the ACLU's Women's Rights Project.

Half a century ago, in October 1970, I became the executive director of the ACLU. I had a wish list, and foremost on the list was the establishment of a Women’s Rights Project.

I had been involved in a few women’s rights cases in my previous post as director of the New York Civil Liberties Union. My wife, who was a young corporate executive at a time when not many women held such posts, encountered discrimination against women on a regular basis. Most importantly, a feminist movement had been reborn in the late 1960s, and I wanted the ACLU to be part of it and to contribute expertise in litigation. Though the era of the Warren Court had just ended, and our prospects for extending constitutional rights to those previously denied such protections were drastically curtailed, I thought the re-emergence of a feminist movement might be the chance we needed to succeed in promoting women’s rights.

The ACLU board readily endorsed the establishment of a Women’s Rights Project (WRP). The next hurdle was raising the funds for it. The ACLU had only recently established a tax-deductible entity that could receive foundation grants, and it took me a while to get funding.

When I got the funds we needed, I began a search for a director. I heard that the New Jersey ACLU had secured the volunteer assistance of a professor at Rutgers Law School who had done excellent work. Her name was Ruth Bader Ginsburg. I called her to arrange an interview.

Ruth impressed me when I met her, but what really captivated me was the quality of her written work. Her legal pleadings and briefs were powerfully argued and beautifully written, and the dominant theme that emerged from them was that women and men should not be limited by sexual stereotypes. Men could be nurturing parents and caregivers, women could be breadwinners, and both were entitled to equal treatment.

I offered Ruth the post of director of the Women’s Rights Project, but ran into some difficulty. Columbia Law School was intent on appointing a woman to be its first tenured female faculty member, and they had offered the post to Ruth. She wanted to accept.

Fortunately, I knew the dean of Columbia Law School, Michael Sovern, who subsequently became the president of the university. Mike had been the youngest full professor in the university’s history and became dean about the same time I became the executive director of the ACLU.

While I was still at NYCLU, Mike served on its board. He had played a leading role in equal rights litigation involving race discrimination, and shared my interest in seeing the courts deal with sex discrimination. We agreed to an arrangement allowing Ruth to take on both roles, as she wanted: Columbia Law School’s first female tenured professor and the founding director of the ACLU’s Women’s Rights Project. We shared her salary. With Dean Sovern’s support, Ruth was able to spend most of her time at the ACLU while extending Columbia Law School’s tradition of being foremost among the country’s law schools in fostering equal rights.

I also wanted to hire another lawyer to help launch the project. Ruth was already active in promoting women’s rights as a legal scholar, but she was not an activist in the emergent feminist movement. I wanted someone who would make sure WRP would be well connected to the movement. Also, at the outset, I was unsure of how much time Ruth would have to devote to her duties at Columbia. We ended up hiring Brenda Feigen, a well-known activist in the feminist movement, who became Ruth’s co-founder of WRP. As it turned out, I need not have worried about Ruth’s lack of credentials in the feminist movement. The activists soon discovered the groundbreaking impact of the litigation she led with the project.

One of the places where I sought funding for WRP was the Ford Foundation. Initially, this was a failure. The Ford Foundation rejected a number of proposals I submitted. When I went to see the foundation’s president, McGeorge Bundy, it went very badly. He yelled at me during most of our meeting. Bundy had been national security advisor under Presidents John F. Kennedy and Lyndon B. Johnson, and was a principal architect of the Vietnam War. He was angry with me because I had been on television defending the rights of those protesting against the war.

It turned out, however, that a couple of the foundation’s program officers at Ford, who were just starting to propose grants in the women’s rights field knew about Ruth’s groundbreaking litigation in the field, and they wanted to get involved. They helped convince Ford to make a grant to WRP. I was eager to accept the grant not only because of the support it would provide for WRP, but because it could open the door for Ford to support for other projects. But Ford imposed a condition: Women’s Rights Project could not support abortion rights.

This posed a dilemma. The ACLU was already deeply involved in pursuing the right to an abortion and we intended to continue. On the other hand, I was reluctant to give up our breakthrough at Ford. I decided to establish a separate Reproductive Freedom Project to operate alongside WRP, funded by John D. Rockefeller III instead. I hired a young lawyer, Janet Benshoof (who recently passed) as director, and she and Ruth became close as Ruth advised her on litigation strategy, but did not directly take part in the abortion litigation. The Women’s Rights Project and the Reproductive Freedom Project remain powerhouses that are still fighting for gender equity and reproductive rights today.

In later years, I wondered whether this split had worked out serendipitously. If Ruth had been directly engaged in our abortion rights litigation, it might have been held against her in later years when President Carter nominated her to the U.S. Court of Appeals for the D.C. Circuit, or when President Clinton nominated her to the Supreme Court. In addition, Ruth already had enough on her plate challenging sex discrimination.

A not-so-secret weapon of Ruth’s was the unwavering support of her husband, Martin Ginsburg, who was outgoing while Ruth appeared shy and reserved. I later came to believe that her reputation for shyness was not wholly deserved — she spoke only after carefully thinking out what to add to a conversation. When Marty joined Ruth on visits to my home, he would comment knowledgeably on the wines I was serving. I regularly told others that Marty was the most supportive husband I ever met. Though he ran a highly lucrative law practice as a tax law specialist at a major New York law firm, Ruth’s career came first. When she was appointed to the D.C. Circuit, he quit his law practice and accepted a professorship at Georgetown University Law School. He did this because he wanted to ensure there would be no conflict of interest due to his law firm’s extensive list of clients. Marty lobbied hard, and successfully, for Ruth’s appointment to the Supreme Court.

Ruth was always intent on giving credit to those who came before her. The landmark case, Reed v. Reed, in which she persuaded the Supreme Court unanimously to apply the 14th Amendment’s guarantee of “equal protection of the law” to discrimination on the basis of sex, was an example. Though they played no part in writing her brief, Ruth identified two feminists on the ACLU board as co-counsel. One was the elderly and famously feisty Judge Dorothy Kenyon, who had been appointed a judge by New York City Mayor Fiorello LaGuardia, long before women were even considered for such posts. The other was Pauli Murray, a gay, Black feminist who was a member of the clergy and a formidable legal scholar. Pauli had long argued that the 14th Amendment should be invoked to challenge sex discrimination.

As has often been noted, a number of the plaintiffs in Ruth’s litigation were men. Among them was the husband of a woman in the Air Force, who was denied housing benefits equal to those provided to the wives of men in the Air Force. Another was a widower denied social security benefits equal to what a widow would have received and that would have enabled him to devote himself to raising his young child. These cases exemplified her concern with sexual stereotypes, which she believed harmed men as well as women. By carefully managing her litigation and building legal advances on the successive precedents that she won, Ruth ultimately persuaded the Supreme Court to set a standard of “heightened scrutiny” when considering sex discrimination.

I remember Ruth as a wonderful colleague. I enjoyed opportunities to take her to lunch. One lunch that stands out in my memory was when she had just returned from a trip to China with a delegation from the American Bar Association at the very end of the Cultural Revolution. For the previous decade, China had been closed to the rest of the world, and I was eager to hear from her about what had happened to law, the courts, legal defense, and legal education. I kept her at lunch for a good part of the afternoon. Many years later, when I was traveling regularly to China, I arranged for her to give a lecture on American civil liberties at Beijing University Law School.

I last saw Ruth at an event in Washington shortly before the pandemic shutdown. We were only able to speak briefly. In those few moments, she made clear to me how eager she was to survive until a new president could appoint her successor. Given the ravages of the multiple forms of cancer she endured, I think she survived as long as she did through sheer willpower. Though she lived a long, full life with great accomplishments, was able to enjoy her love of the arts, and had an extraordinary relationship with Martin Ginsburg, her greatest supporter, it is our misfortune that she is no longer with us. Her legacy will remain with us forever.