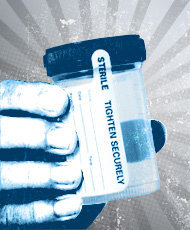 Will Matthews, ACLU of Northern California
Share This Page
September 15, 2011

Taking swift action, a federal district court judge last night granted an ACLU request and temporarily halted an unconstitutional policy at a public college in Missouri requiring all incoming students to submit to mandatory drug tests. Judge Nanette K. Laughrey ordered officials at Linn State Technical College in Jefferson City, Mo., to stop analyzing urine specimens that have already been collected and to instruct the drug testing company not to release any results it may have already compiled.

The orders came just a few hours after the ACLU and ACLU of Eastern Missouri filed suit in federal court to stop the college from drug testing its students without any suspicion of wrongdoing, arguing that the policy violated the students’ Fourth Amendment rights.

Linn State officials last week began removing students from class in small groups in order to collect a urine sample for drug screening, for which students were forced to pay $50. Mind you, we are talking about adults over the age of 18 who have committed no crime, and whom the college has stated they do not suspect of drug use. But that did not matter to school officials, as student after student was treated with suspicion and as if they had broken the law.

In conversations with the ACLU, Linn State claimed that, as a technical college, their students operate heavy machinery and that, as a result, drug testing served as a way to help keep them safe. Not quite. The truth is that not a single one of our six plaintiffs operates heavy machinery as part of their academic training. They are enrolled in programs like Electronics Engineering Technology and Design Drafting Technology, and merely want to be able to go to school and earn a degree without being treated as if they have broken the law.

Our complaint demands that Linn State rescind their unconstitutional drug testing policy, refrain from testing any more students and return the $50 they charged all students.

But this case goes beyond Linn State. We filed our complaint in federal court not to just stop Linn State, but to stop any other college that thinks they can drug test their student body. It is illegal and they cannot.