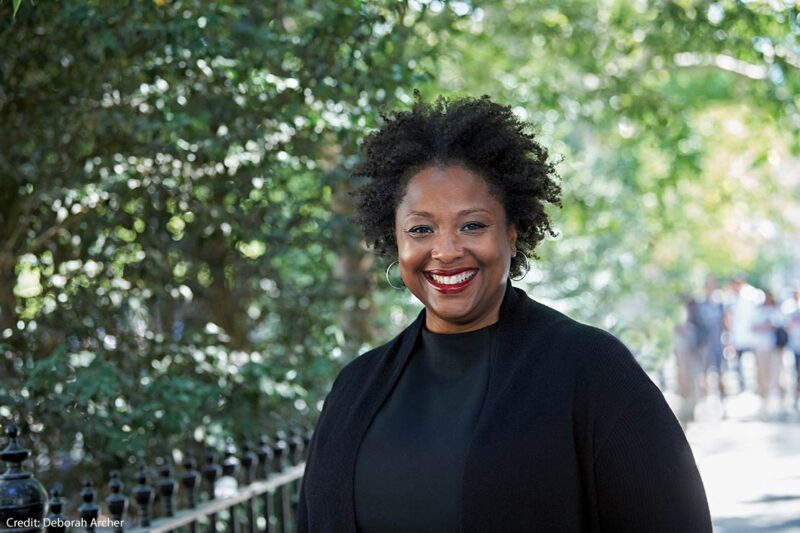 The civil rights lawyer, scholar, and teacher is the first Black person to lead the organization's board.

Deborah Archer’s earliest memory of protest came early in her childhood. Her Jamaican immigrant parents moved their family from Hartford, Connecticut, to the suburbs, where they felt they could give their children a better life and education. They were one of just two Black families in their new neighborhood, and her white neighbors quickly made it clear they were not welcome. One morning, the family woke to find their new home vandalized, “KKK” spray-painted across their house and car.

Nine-year-old Archer was terrified, and briefly went to live with her grandmother. But her parents encouraged her, telling her she needed to fight back against the people who tried to drive the family from their new home.

“For me, going back into that house was my earliest memory of resistance,” Archer recalls. “Playing in our yard, going to our neighborhood playground — I view all of those as acts of protest, like the small acts of resistance that Black people have engaged in throughout history.”

A Life of Service and Advocacy

Archer’s act of resistance as a girl foreshadowed a life dedicated to civil rights advocacy and scholarship. This year, she takes the helm of the ACLU’s board of directors as its first Black president. It’s a fitting milestone for the lawyer, scholar, and teacher whose first job out of law school was with the ACLU’s national legal department as a Marvin M. Karpatkin legal fellow.

“After beginning my career as an ACLU fellow, it is an honor to come full circle and now lead the organization as board president,” said Archer. “This organization and its critical work has helped shape who I am as a lawyer, an advocate, a parent, a person, and a leader.”

Today, Archer is a sought after expert in civil rights, civil liberties, and racial justice. But it wasn’t until college and law school that she says she really began to understand the power of collective action. As a student at Smith College and Yale Law School, she recalls participating in and organizing protests in response to racism on campus, the Rodney King verdict, and divestment from South African apartheid. “Through all of those activities, I learned the foundational tools that I use and engage right now.”

Archer replaces Susan Herman as the president of the ACLU’s board, who stepped down after serving 12 years leading the organization’s board through numerous watershed moments. Archer has been a member of the ACLU board since 2009, and a general counsel and member of the executive committee of the board since 2017.

A tenured professor of clinical law and director of the Civil Rights Clinic at New York University School of Law, Archer takes on her new role at a pivotal moment for the ACLU. Last year, the U.S. grappled with white supremacy and a long history of racism, a protest movement rivaled only by the Civil Rights Era of the 1960s, the COVID-19 pandemic, and one of the highest turnout elections in history. These challenges exposed vast structural inequities, and, in many ways, clarified the work that lays ahead.

“COVID-19 was introduced into a society and systems that are profoundly racially discriminatory in individual, institutional, and structural ways,” says Archer. “We have to address those very fundamental, longstanding inequalities that have resulted in such an unbalanced burden for people of color.”

At the ACLU, that means continuing to do the hard work of challenging the structures that fuel systemic racism and inequity in housing, voting rights, access to resources, and more, all of which the organization is tackling in its newly-launched Systemic Equality program. Archer draws inspiration and energy from the spirited movement for racial justice and against anti-Black racism that swelled during the summer of 2020.

“Younger folks engaged in this movement don’t feel constrained by the losses of the past, and they have imagination beyond belief,” says Archer. “I think we can do ourselves a service by following their lead, because they are fearless, they are creative, and they are not deterred by the past.”

A Brighter Future For All

As Archer steps into this new role, one big reason she is eager to lead this work shines above the rest: her sons.

“Each and every time they leave the house I am terrified,” says Archer. “It is not enough for me to pray that the world will be kind. I need to fight for my children. For everyone’s children. That is why I am here. That is why the ACLU exists: To build a better future for my sons, and for all of us.”