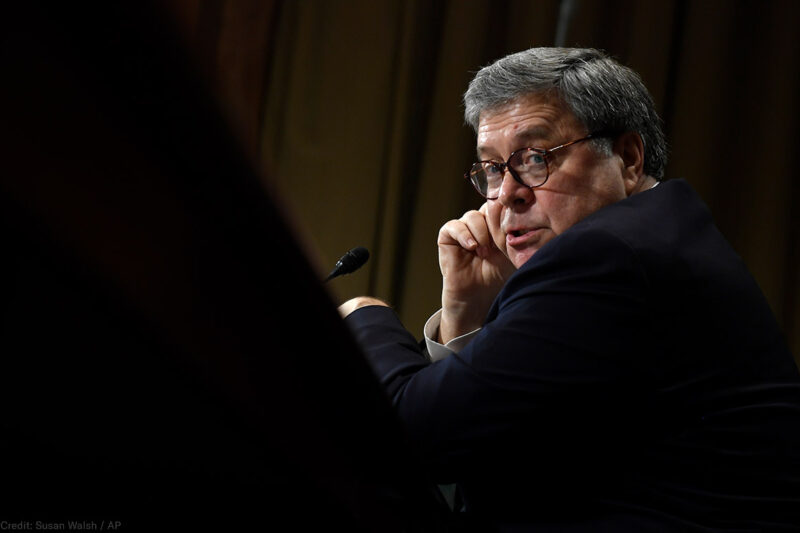 Attorney General William Barr recently invoked a powerful, rarely used privilege to withhold information from the public, marking a dramatic turn of events in a battle over the release of a highly contested report.

Only this time, we’re talking about a report that would provide much-needed information on the government’s spying activities.

For the past five years, Twitter has been trying to make public a transparency report with detailed statistics about how often the U.S. government seeks to spy on Twitter’s users. At nearly every turn, the government has been putting up roadblocks to prevent that report from seeing the light of day.

Fortunately, the judge was unpersuaded by whatever was in that secret document, and rejected the government’s attempts to dismiss the case, Twitter, Inc. v. Barr.

But that hasn’t stopped the government.

Now, Attorney General Barr is invoking the “state secrets privilege” in an effort to keep Twitter’s lawyers from seeing the secret declaration and to shut down the lawsuit altogether. But as we explain in an amicus brief filed in court this week, Barr’s assertion of the state secrets privilege is highly inappropriate and dangerous. If left unchecked, it would risk endorsing a dramatic expansion of the privilege — with far-reaching consequences for future cases involving classified material.

The state secrets privilege is a powerful tool that the government invokes to withhold evidence from litigation—and even force the dismissal of a case in the name of national security. Because the privilege can result in such severe consequences, it should be reserved for the most exceptional cases. To justify its use, the government has to show that any disclosure of the evidence — even disclosure limited to lawyers with security clearances — creates an unacceptable risk of harm to national security. It’s a high bar, and the government has come nowhere close to meeting it in this case.

The law of the state secrets privilege doesn’t allow the government to invoke the privilege over “generic” and “seemingly boilerplate” information, and it certainly doesn’t justify the dismissal of Twitter’s lawsuit. The privilege is too powerful a tool, and too susceptible to abuse, to permit its casual invocation for a tactical advantage in litigation.

One example of how the privilege can result in injustice is a lawsuit we filed in 2007 on behalf of victims of President Bush’s post-9/11 rendition program. In that program, the government secretly and forcibly transferred people to CIA “black sites” or other foreign prisons run by intelligence agencies known to torture prisoners. The government argued that any litigation of these issues would create an unacceptable risk of disclosure of “state secrets.” The Ninth Circuit ultimately agreed and dismissed the suit. As a result, victims of rendition and torture were denied their day in court.

Government abuse of the privilege is also well-documented. For example, in United States v. Reynolds — the Supreme Court’s seminal state secrets case — it turned out that the government abused the privilege to improperly withhold evidence. In Reynolds, the families of civilians killed in a military plane crash sued the government and sought the Air Force’s report about the accident. In response, the government claimed that the report was shielded by the state secrets privilege because the aircraft was engaged in a “highly secret mission,” and disclosure of the report would harm national security. But decades later, the report was declassified, and the public learned the truth. The Air Force’s report turned out to contain “no details of any secret project the plane was involved in,” but instead detailed “a horror story of incompetence, bungling, and tragic error.”

Given the risk of abuse of the state secrets privilege, and given the harsh consequences for plaintiffs, it’s essential that courts closely and skeptically scrutinize any claim of it. In Twitter’s case, it’s clear that the government’s assertion of the privilege doesn’t stand up to scrutiny.