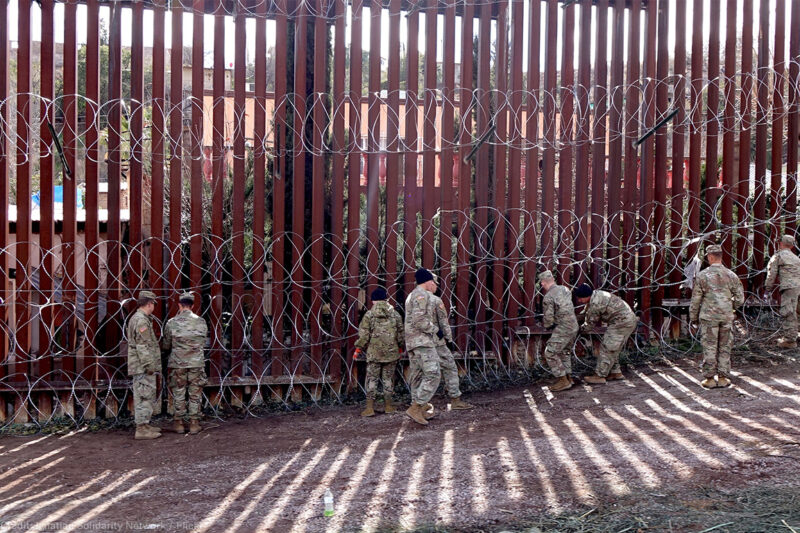 This was originally published by USA Today.

President Donald Trump declared a “national emergency” on Friday to pay for his border wall. In doing so, he’s violating the law, subverting the Constitution and hurting American communities. That’s why we’re taking him to court.

We all know what an emergency really is. It’s when something unexpected and dangerous happens that requires an immediate response. Trump himself admitted that there is no emergency when he said, “I didn’t need to do this.”

Trump added that his reason for the declaration was that he wanted to build the wall “much faster.” But that’s not how our democratic system works. Congress considered his desire for $5.7 billion in wall funding — and rejected it, instead appropriating $1.375 billion for new border barriers. The president cannot now try to get his way by unilaterally taking money that Congress has already budgeted for other things.

The Constitution assigns Congress the power of the purse. Members of Congress fight to secure funding for national priorities and their constituents’ needs during the yearly budget battles that dominate Washington for months.

The system is far from perfect, but it’s the way it works in our democracy. If Congress doesn’t give him what he wants, the president can’t do an end run by diverting public money for a campaign promise for which he has failed to secure funding.

Congress has granted the president limited power to spend federal funds without a congressional authorization if the president declares a national emergency. But it only allows the president to spend taxpayer money on military construction projects, like overseas air bases in wartime, “that are necessary to support such (emergency) use of the armed forces.”

That’s clearly not what’s happening here. Besides the fact that there isn’t actually an emergency, Trump’s declaration doesn’t say how a diversion of military construction funds is necessary to support the armed forces. No president has ever tried to use emergency powers to fund a massive and permanent domestic project like this.

Trump is also trying to take money from funds seized by the government through anti-drug operations and forfeitures. But Congress has passed laws dictating that this money must be used only for certain law enforcement purposes. It’s not a slush fund that can be used to finance presidents’ unfulfilled campaign promises.

We filed a lawsuit on behalf of the Sierra Club and the Southern Border Communities Coalition to stop the irreparable harm their members will suffer if Trump’s illegal border wall construction plan is allowed to proceed.

The coalition’s members live near the border in California, Arizona, New Mexico and Texas. A wall would heighten divisions in border communities and promote hostility towards immigrants and communities of color in border areas. It would also increase the risk of flooding and threaten residents’ access to clean water, clean air and other natural resources.

In moving forward with an unauthorized border wall, the Trump administration is ignoring decades-old environmental and public safety laws that safeguard the places, species and values that Sierra Club members work to preserve.

Trump’s emergency declaration is a blatant abuse of power in the service of his anti-immigrant agenda and a brazen attempt to subvert the constitutional separation of powers.

The federal treasury isn’t a bank account that the president can just raid whenever he’s in a bind. It’s taxpayer money that the Framers specifically left in the hands of Congress. Trump is seeking to thwart Congress’ will. Now we are asking the courts to give Trump another lesson in how the Constitution works.