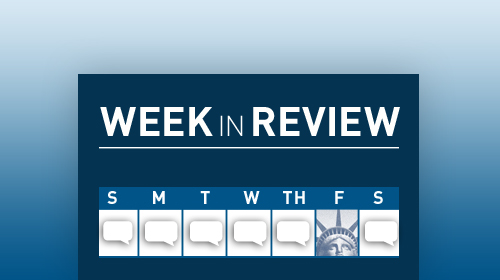 Who seems terrified about consumers taking control over the privacy of their own online data?

Who among us is being subjected to video surveillance from the comfort and familiarity of our own neighborhoods? (You may want to take a peek out of your own front window.)

What steamy best-selling novel has spurred the latest challenge over free speech and censorship?

Voters of which state will have one less barrier to face before exercising their right to vote on Election Day?

Which state has freed an innocent man who had been erroneously condemned to death row due to a false confession, and which has upheld a death sentence in another false confession case?

Corporate America: We Want to Track You

On Monday, Microsoft received an outraged letter from the Association of Network Advertisers in response to the company’s May announcement that the default tracking setting of its new browser, IE 10, will be “Do Not Track.” The letter, which is signed by 36 major corporations including General Mills, American Express, General Motors, Verizon, Visa, Wal-Mart, Bank of America, and many others, insists the decision to allow users modest controls over the tracking of their online movements is wrong.

Police Cameras Outside Your Door

The ACLU of Michigan recently put out a report focused on a uniquely disturbing application of surveillance cameras: their deployment in residential neighborhoods. Surveillance units in Lansing provide intrusive 360-degree views and include powerful zoom capabilities. ACLU of Michigan had an independent researcher look at the impact of the cameras, and the study concluded that African Americans were twice as likely to be under camera surveillance as white residents. This disproportionate monitoring in a society in which African Americans and other minority groups already feel profiled “only serves to heighten their sense of powerlessness and to foster mistrust of government officials.”

Earlier this year, the Brevard Public Library in Florida removed 19 copies of the best-selling Fifty Shades of Grey from circulation on the ground that it is “semi-pornographic.” In response to such censorship, which violates the First Amendment to the U.S. Constitution and Section 4 of the Florida Constitution, the ACLU of Florida and the National Coalition against Censorship sent a letter to the county, and local library users successfully demanded that the books be returned to the shelves. This week, marked the 30th anniversary of Banned Books Week; let’s toast our right to free speech.

On Tuesday, a Pennsylvania state judge delayed the implementation of the state’s voter ID law until after the general election. That law had threatened to disenfranchise thousands of elderly residents, students, the homeless and communities of color this November, and the ACLU of Pennsylvania represented numerous voters who had difficulty obtaining photo ID. This Election Day, voters can still be asked for photo ID, but those without it will be allowed to vote without restriction and receive information about the law and how to get approved ID. Previously, voters who lacked ID would have been given a provisional ballot and would then have six days in which to produce an acceptable ID in order for their vote to be counted.

A Good Ride from Death Row,
Texas Court Upholds Death Sentence of Innocent Man Although “There is Something Very Wrong” with Case Against Him

Recently, two death penalty cases built on false confessions had very different results. In a Louisiana victory, Damon Thibodeaux walked off death row after 16 years of imprisonment for a crime he didn’t commit – the 141st person to be exonerated after being sentenced to death. In Texas, Max Soffar has been moved one step closer to execution, even though three judges from the Texas Court of Criminal Appeals admitted that there was something “very wrong” with the case against him. False confessions may be difficult for many people to comprehend, but cases are well documented, and in the Soffar case, little more than one year after the execution of Troy Davis, our system moves closer to another miscarriage of justice.

This is your week in civil liberties. Let us know if this is useful or if you’d like to see changes. Share your thoughts: ideas@aclu.org