What We Learned From William Barr’s Confirmation Hearing 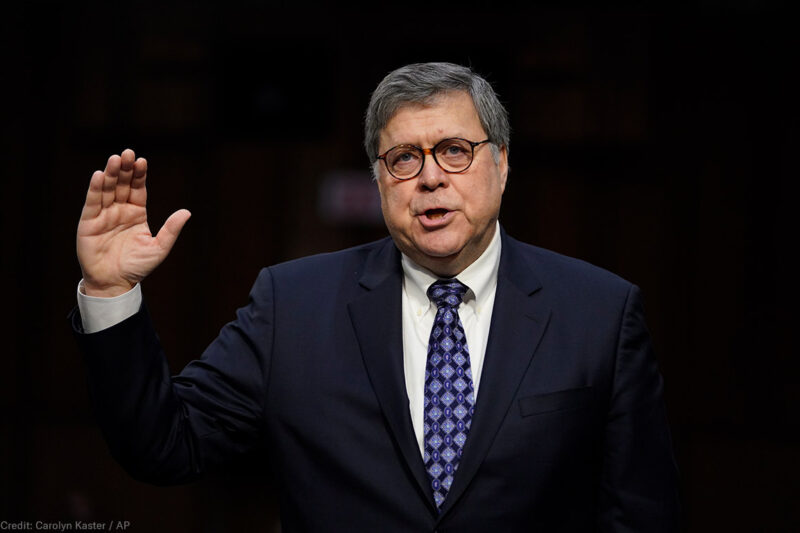 On Tuesday, the Senate Judiciary Committee questioned William Barr, President Trump’s nominee to be attorney general, on his views on the special counsel’s investigation into Russian interference, the criminal justice system, and immigration. Senators also addressed other key issues — including privacy, marijuana, voting rights, abortion rights, and LGBTQ civil rights — in their questioning.

While the ACLU does not take a position on nominations, we have raised concerns about his record, including his past work involving warrantless surveillance, mass incarceration, and civil liberties abuses.

As is too often the case in confirmation hearings, Barr sought to allay concerns with many of his responses, but actually committed to very little. And he generally signaled alignment with Trump administration policies and the direction of the Justice Department under Jeff Sessions’ leadership. If Bar will continue to take the department where Sessions led it, the next two years will be disastrous for civil rights and civil liberties.

Throughout the hearing, Barr stressed that he has no plans to interfere or let the president stop Robert Mueller’s investigation into Russia’s involvement in the 2016 involvement. However, he did not commit to making the contents of Mueller’s final report public. Rather he said it is his goal “to get as much information out as I can consistent with the regulations.”

What he actually reveals is likely to turn on his assessments of the scope of executive privilege, about which he has previously advanced extremely expansive views. And even as to firing Mueller, he committed only to not doing so illegally, that is, without cause. But he did not detail what he understands “cause” to mean, leaving himself substantial wiggle room on both issues.

He followed this up by saying that if a president tried to coach a witness or offer a pardon in return for false testimony, such actions may amount to obstruction of justice, but reiterated his skepticism about Mueller potentially investigating obstruction of justice by the president in connection with the firing of James Comey.

While Barr rejected the claim by Trump’s personal attorney Rudy Giuliani that the White House has a right to “correct” Mueller’s report, he expressed sympathy with claims that Trump is a victim of political bias. Barr also said he would not necessarily recuse himself from the probe even if Justice Department ethics officials recommended it.

Barr has a long history of supporting harsh criminal justice policies that have contributed to America’s mass incarceration crisis. He expressed little regret for his past views, but he did offer support for bipartisan reform measures like the First Step Act, which President Trump signed into law late last year, and pledged to “diligently implement” the new law.

Sen. Cory Booker (D-N.J.) asked Barr about a past statement where he asserted that “there’s no statistical evidence of racism in the criminal justice system.” Barr said that while there’s “no doubt that there are places where there is racism still in the system,” he thought “overall” the system is “working.”

Barr toed Trump’s anti-immigrant line, echoing the president’s call for a Southwest border wall and attacking asylum-seekers, whom he claimed are “abusing the asylum system” and “are being coached as to what to say.”

Defending Trump’s decision to shut down the government until he gets billions of dollars to build the wall, Barr suggested that Trump could go around Congress to do it since “there are moneys that the president may have power to shift” to go towards the wall.

Barr once again defended the constitutionality of Trump’s Muslim bans, criticizing district court judges who ruled against the different versions of the ban. He did so even though the Trump administration abandoned efforts to appeal the first two versions of the Muslim ban and only defended the third version in the Supreme Court.

Barr pledged to “vigorously enforce the Voting Rights Act,” but he appeared to go out of his way to express skepticism about the damage done by voter suppression laws. While speaking with Sen. Patrick Leahy (D-Vt.) about voter suppression policies, Barr said the “underlying problem” of low voter turnout really has to do with public disengagement with politics and that “voter turnout shouldn’t be artificially driven up without also addressing the issue of an informed citizenry.”

During the hearings, Leahy noted that Barr was a senior official at Verizon “during the NSA’s metadata program” that “required telecom and internet providers to hand over huge amounts of data to the government” and held the position that Americans do not have a Fourth Amendment-protected privacy interest in data held by third parties.

When Leahy asked if he changed his opinion on privacy rights following the Supreme Court’s ruling in Carpenter v. U.S., where the Supreme Court rejected the government’s argument that individuals don’t have Fourth Amendment protected privacy interest in sensitive location data held by third parties, Barr said he “hadn’t read” the Carpenter decision and will “take a look” at the court’s ruling.

Barr did not distance himself from his past assertion that Roe v. Wade “should be overturned,” but he said that the Justice Department has “stopped as a routine matter asking that it be overruled and I don’t see that being resumed.” Barr did not commit to defending Roe in court, deferring the decision to the solicitor general.

While Barr said he personally opposed employment discrimination against LGBT people, Barr appeared aligned with the Trump administration’s position that the Civil Rights Act of 1964 does not protect sexual orientation and gender identity. According to Barr, Congress would have to pass a new law to implement such protections as the 1964 law only covered “male-female” sex discrimination.

In an encouraging note, Barr said that he will not use Justice Department resources to enforce federal marijuana laws in states that have legalized marijuana, including the District of Columbia.

“To the extent that people are complying with the state laws on distribution and production, we’re not going to go after that,” he said, while urging Congress to create national standards because the differences are “breeding disrespect for federal law.”

When Sen. Dianne Feinstein (D-Calif.) asked Barr about his defense of George W. Bush’s torture program, Barr said he would uphold the 2015 McCain-Feinstein Torture Prohibition Amendment. He also said torture is never lawful and agreed that the 2015 law “definitively” prohibits waterboarding. “I don’t think we should ever use torture,” Barr said.

Overall, Barr’s views seemed to suggest that he will continue with many of Sessions’ wrongheaded policies that have been disastrous for civil liberties and civil rights. If he does, he can expect to see us in court.