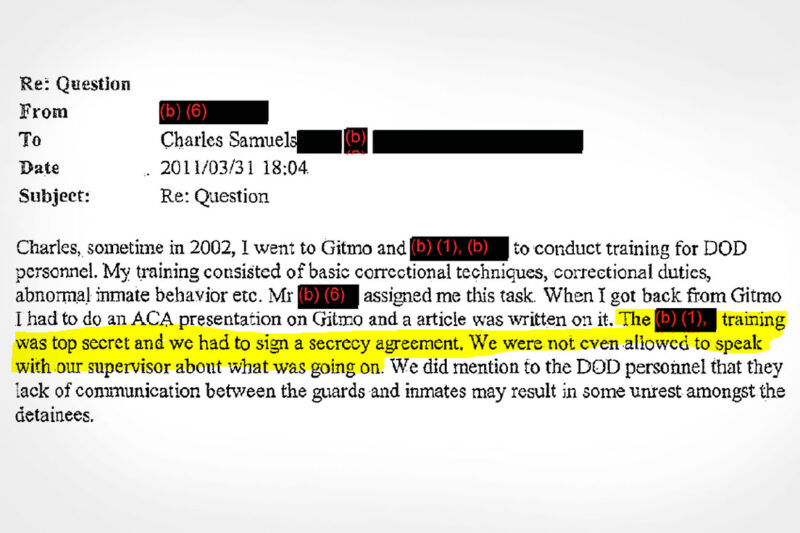 The U.S. agency responsible for managing the federal prison system sent personnel to a secret CIA prison in Afghanistan where detainees were tortured during the Bush administration’s “war on terror” and covered its involvement up, according to emails obtained by the ACLU through a Freedom of Information Act lawsuit.

As a result of our lawsuit, which we agreed to end yesterday, the Federal Bureau of Prisons confirmed not only that it had sent two employees to assist CIA officials at the secret prison, but that they had been instructed to take extraordinary measures to hide their involvement. As one email revealed in our lawsuit put it, “We were not even allowed to speak with our supervisor about what was going on.”

Nicknamed “the Salt Pit” and codenamed “COBALT” in the Senate torture report, this CIA “black site” was an integral part of the CIA’s post-9/11 torture program. The CIA’s own chief interrogator later described the Salt Pit as being like a “dungeon.” According to the Senate torture report, detainees were kept in total darkness, shackled to the floors or walls of their cells, and given only buckets to dispose of their own waste.

The Senate torture report also revealed that early in the Salt Pit’s operation, in November 2002, the CIA invited officials from the Federal Bureau of Prisons — which runs the civilian federal prison system and provides technical assistance to state prison systems — to join them at the Salt Pit. The purpose of the visit was to evaluate the CIA’s management practices and provide technical assistance, much as the bureau does for civilian prison agencies.

But instead of raising alarms, bureau officials praised this dungeon. At one follow-up meeting described in the Senate torture report, they told CIA officials they were “WOW’d” by the extreme levels of sensory deprivation at the Salt Pit and had “never been in a facility where individuals are so sensory deprived.” Nevertheless, they told the CIA officers that in their judgment, and taking into account “the mission” of the Salt Pit, “the detainees were not being treated in humanely [sic],” the facility was “sanitary” and provided medical care, and “staff did not mistreat the detainee[s].”

Shortly after the Senate torture report was released, the ACLU submitted a Freedom of Information Act request to the bureau to find out more about this civilian agency’s potential involvement in CIA torture. At first, the bureau stonewalled, replying that no records of its CIA relationship existed and telling reporters, “We will not be providing any information regarding your inquiry.” They continued to stonewall us in an administrative appeal. It was not until the ACLU sued that the bureau reluctantly conducted new searches. These searches resulted in the production of several email messages and led the bureau’s attorneys to sign a remarkable sworn declaration describing the cover-up.

The emails confirm that two bureau officials traveled to both Guantanamo and an undisclosed location to provide training on, in the words of one of the two officials, “basic correctional techniques, correctional duties, abnormal inmate behavior etc.” They were instructed to keep the entire engagement secret, and “[w]e were not even allowed to speak with our supervisor about what was going on.” In subsequent years, they also were interviewed twice by the FBI about the engagement.

The bureau’s sworn declaration confirms that the undisclosed location was a CIA detention site, that the dates of their visit to this site match those described in the Senate torture report, and that the CIA took extraordinary measures to prevent the bureau from generating any records of its involvement with this work. According to an interview described in the declaration, the two bureau officials (one of whom was based in bureau headquarters in Washington, D.C., and the other of whom was based in an unnamed state in the Midwest) were not told why the other had been selected. There is no record of anyone in the bureau making the decision to select them for this assignment, and it is not clear whether the bureau or the CIA carried out that selection. They did not receive any written materials regarding the engagement. They were instructed not to discuss their participation with anyone and not to create or retain any records of it.

And although our lawsuit forced the bureau’s attorneys to search the travel records of both bureau employees, neither of their travel histories contained any records of international travel during the time when they visited the CIA black site together. Indeed, even though their travel histories did reflect travel to Guantanamo for similar training work for the Defense Department, their work for the CIA was even more secretive and off-the-books.

The ACLU originally filed this lawsuit to expose past wrongs. The Bureau of Prisons’ work at the Salt Pit illustrates how torture — and the secrecy surrounding it — corrupts every institution it touches. This is more important than ever to remember when the man who will soon occupy the Oval Office has stated publicly the he “love[s] waterboarding” and “would absolutely authorize something beyond waterboarding.” Now is the time for federal officials to ask themselves: If torture once again becomes policy, will I have the courage to do the right thing and blow the whistle?