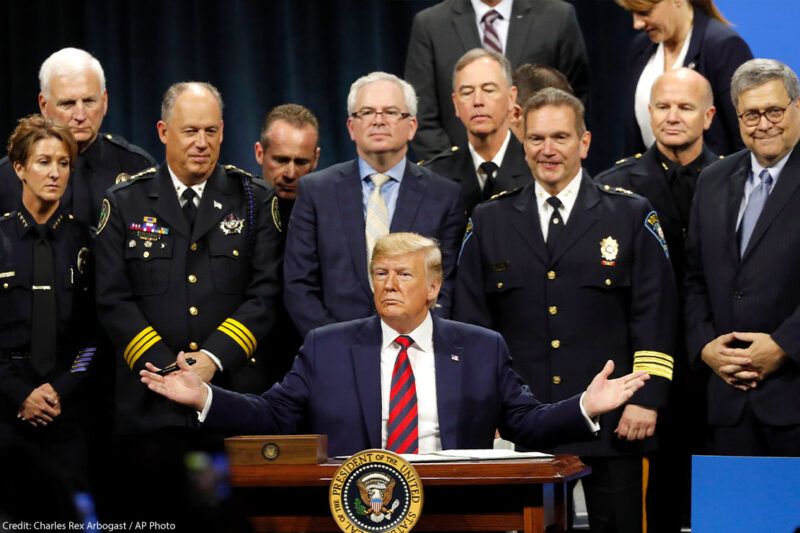 This weekend the Trump administration released a 332-page report purporting to offer recommendations on police reform. The findings of this sham commission — composed primarily of police and prosecutors — show what most already knew to be true. The Trump administration never had any plans to implement transformative changes to policing that would curtail police violence, truly hold law enforcement accountable, or conduct any legitimate federal oversight of even the most troubled law enforcement agencies. This report was never meant to enhance safety for all communities; it was meant to advance the Trump administration’s “law and order” political agenda.

We must transform the role of police and prosecutors in the criminal legal system.

The Trump commission report demonizes reform-minded prosecutors who use their discretion to choose liberty over incarceration and rehabilitation over punishment. These exercises of discretion — including choosing not to enforce and prosecute certain offenses —are exactly what prosecutors should be doing to help end mass incarceration. So are the efforts to end cash bail and wealth based incarceration that the Trump commission links, without evidence, to increased crime. In fact, states that have transformed their bail systems, such as New Jersey, have not only seen a reduction in the use of cash bail, but also a reduction in incarceration and crime.

We must stop the use of racist and invasive face recognition technology.

Jurisdictions across the country, including Portland, Boston, San Francisco, and the State of Vermont have halted law enforcement use of face recognition technology. This effort came after recognizing that the racist technology misidentifies people of color at high rates and threatens to supercharge over-policing of communities of color. But the Trump commission calls for an expansion of these dangerous technologies — exactly the opposite of what we need. By ending law enforcement reliance on face recognition algorithms we can limit false arrests of Black men, and ensure community members are free from the threat of pervasive government surveillance every time we leave our homes.

We must abolish qualified immunity.

Across the country there has been a bipartisan effort to reign in qualified immunity — a court-created legal defense that shields police officers from liability for misconduct. Once an obscure legal doctrine, it has become a central focus of activists’ calls for police accountability as recognition of the policy as one of the main doctrines used to defend police officers in cases of police violence has grown. Officer Derek Chauvin, the police officer who killed George Floyd by kneeling on his neck for over eight minutes in a video seen around the world, might evade accountability in a civil suit through qualified immunity. By abolishing the doctrine of qualified immunity, many families, victims, and survivors of police violence will have the opportunity to obtain some form of justice in our legal system. Yet the Trump commission flat-out rejects the idea of abolishing or even limiting qualified immunity.

We need to implement enforceable legal guidelines that clarify when police officers can use force against members of the communities they are charged with protecting.

Policies that limit officers’ use of lethal force so it is used only when absolutely necessary and after exhausting other alternatives such as de-escalation must be implemented on the local, state, and federal level. Instead, however, the Trump commission asserts that “the most effective measure to prevent police from using force remains for citizens to comply with officer commands” and that community members who are being unlawfully abused by police officers should “Comply, Then Complain.” The “comply, then complain” framework means that people in America must bow down to law enforcement, no matter what their behavior may be. This may be true in totalitarian regimes, but in America, the police work for the people.

From its inception, it was clear that the President’s Commission on Law Enforcement and the Administration of Justice was a thinly veiled attempt to use the idea of “police reform” to promote President Trump’s “law and order” agenda, even as historic numbers of people marched in the streets to demand structural changes and an end to police violence. The commission’s goal of “promoting public confidence and respect for the law” was a thinly-veiled threat to advocates and organizers fighting to end police violence. Its mandate to look at “refusals by State and local prosecutors to enforce laws” was a rebuke of the movement to fix a corrupt, punitive, and harmful legal system and its mere composition an attempt by the Attorney General to advance a one-sided agenda. This flawed, bad faith approach should be buried along with the rest of the Trump administration’s terrible ideas on Jan. 20.