Check Your Constitutional Rights at the Classroom Door? Not on Our Watch. 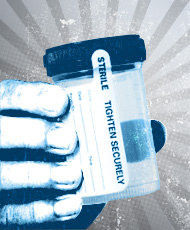 The ruling is in: Linn State Technical College’s mandatory drug-testing policy is patently unconstitutional, and will not stand. After a seven-hour hearing Tuesday, Judge Nanette K. Laughrey of the Western District of Missouri granted our preliminary injunction against the public school, blocking any further drug testing or analysis of urine samples already taken from students. We are thrilled to share this victory with our brave plaintiffs and their peers, who stood up to the school officials who attempted to blindside their constitutionally protected right to privacy.

As we wrote last month, the school had implemented mandatory, suspicionless drug-testing of all incoming students, as well as students who were returning to school after an extended absence. The policy came with little warning and a $50 price tag per test – paid by the students. In implementing the policy, Linn State sought foolishly to go where no public college had gone before – and where we hope none will go in the future, thanks to the judge’s ruling. Explaining her rationale for granting the preliminary injunction, Judge Laughrey referenced all of our key arguments against the policy, ultimately agreeing that it violated the students’ Fourth Amendment rights and was overbroad in its scope, impacting all students rather than a specific subset whose class work might involve heavy machinery.

This decision comes on the heels of another drug-testing related triumph – on Monday, a district court judge in Florida ruled against a new law mandating drug tests for all applicants to the state’s Temporary Assistance for Needy Families (TANF) program, similarly finding the law violated the Fourth Amendment rights of recipients of public assistance. It’s our hope that this week’s one-two punch of rulings against suspicionless drug-testing will serve as a reminder to law and policy makers in states across the country who may be considering similar moves.

Students who attend public institutions do not check their constitutional rights at the door when they walk into the classroom or write a tuition check, and neither do poor families who apply for public assistance. For the powers that be to suggest otherwise is an abomination that should deeply trouble us all. Thankfully, we have the law on our side.