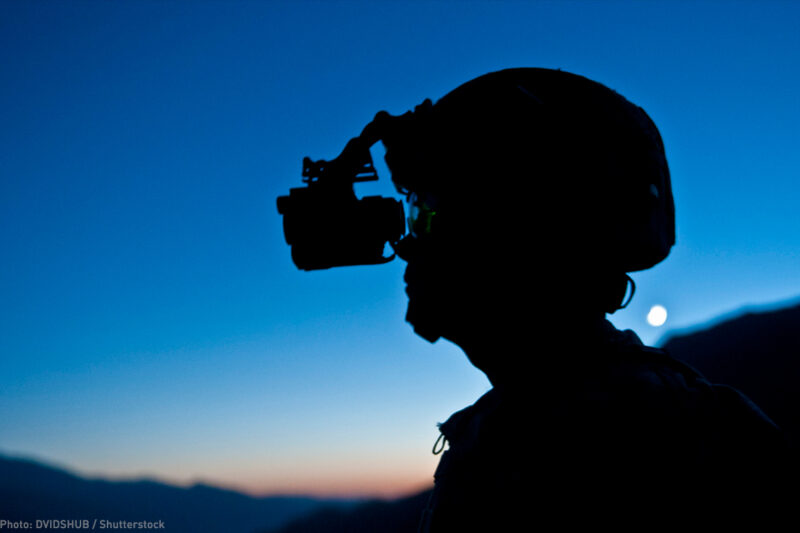 It appears all law enforcement — even a “fictitious federal agency” — can get federally supplied weapons of war, with quite literally, no questions asked.

We learned this a few days ago when the Government Accountability Office (GAO) issued a troubling assessment of the Department of Defense 1033 program. The 1033 program gives federal, state, and local law enforcement surplus military weapons and equipment for use in routine policing. The 1033 program is the poster-child of federal programs responsible for the militarization of U.S. police.

GAO indicated that the Defense Department does not verify the identification of individuals picking up military weapons through 1033. And GAO found that the Pentagon does not verify the quantity of military weapons transferred through 1033. GAO said Defense “lacks reasonable assurance that it has the ability to prevent, detect, and respond to potential fraud and minimize associated security risks.”

And just how did GAO reach this conclusion? GAO posed as a fake federal law enforcement agency and secured military weapons through 1033. They sought $1.2 million worth of rifles, pipe bomb equipment, and night vision googles. And they got them. “It was like getting stuff off of eBay,” according to GAO staff.

The ACLU criticized the 1033 program in its 2014 report, “War Comes Home: The Excessive Militarization of American Policing.” And in Ferguson, Missouri, in the aftermath of the fatal police shooting of Michael Brown, the world got to see for itself just what is wrong with militarized policing. Those protesting Brown’s death were met with armored vehicles, shotguns, rifles, tear gas, and rubber bullets. Veterans from the Iraq and Afghanistan wars expressed horror that they, while on active duty overseas, were less heavily armed and combative than the local police in Ferguson.

Then President Barack Obama was troubled too. He issued Executive Order 13688 in January 2015 to put necessary oversight and protocols in place around law enforcement use of military weapons doled out by the federal government. Certain weapons, like bayonets and tanks, would become prohibited, and other equipment, like Mine Resistant Ambush Protected vehicles (MRAPs) and drones, would be subject to tighter controls that included training supervision, evaluation, and auditing. To do this, E.O. 13688 created an interagency working group that included the Departments of Defense, Justice, and Homeland Security — the primary federal providers of military weapons and equipment to law enforcement.

At a minimum, the working group was supposed to ensure that the agencies giving out these military-grade weapons were talking to one another. But at a September 2014 congressional hearing on federal militarization programs, officials from Defense, Justice, and Homeland Security admitted that they had never met before. This meant that the Pentagon could provide an MRAP to a police department subjected to Department of Justice complaints of police misconduct.

But what this GAO report reveals is that Defense may not only be out of touch with Justice, but with the very law enforcement agencies that it’s lending military weapons to. Just what has the Department of Defense and the interagency working group been doing for the last two years? The oversight and protocols – were those fake too?

Honestly, you can’t make this stuff up, which is frightening since President Trump doesn’t believe the program needs any oversight at all

During the campaign, Trump promised to repeal Executive Order 13688. Not to be outdone, the House voted earlier this month to prioritize the 1033 program for border enforcement. So instead of trying to fix 1033 as GAO indicates is necessary, it’s likely the White House and Congress will allow this program to go further off the rails.

This morning, a House Armed Services subcommittee will convene a hearing to examine the GAO report. After the latest debacle, let’s hope Congress has the sense to rein the 1033 program in by enacting the Stop Militarizing Law Enforcement Act, which eliminates the federal gifting of MRAPs and grenades to police once and for all. State and local communities must also take control over the weapons of war coming to their towns, just as we are asking them to take control of surveillance. If your police department wants an MRAP, you and your neighbors should decide — no one else.