How the Stimulus Can Help Decriminalize Poverty 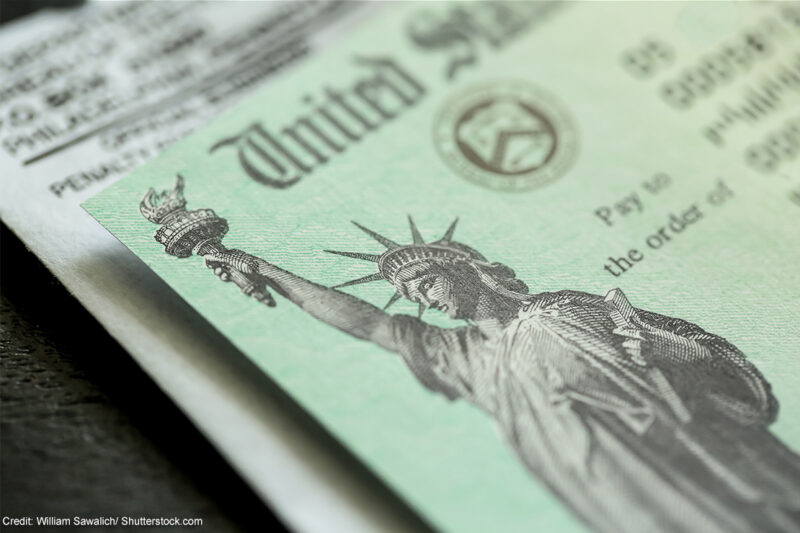 Poverty isn't a moral failing, and it shouldn't be a crime.

With the passage of the $1.9 trillion American Rescue Plan Act, we may be witnessing a turning point in the way this country thinks about poverty.

The plan will provide an unprecedented increase in the social safety net: a third round of direct payments to qualifying Americans — $1,400 per person and an additional $1,400 payment for each dependent — an extension of unemployment benefits, and an expansion of the child tax credit. Remarkably, the stimulus will provide this money without onerous work requirements or unnecessary spending limitations. It will simply put cash in the pockets of those who really need it. The passage of this bill reflects a profound ideological shift, and could help forge a path away from the American tradition of penalizing, and often criminalizing, poverty — a practice that disproportionately harms people of color.

Compare the 2021 stimulus with the Personal Responsibility and Work Opportunity Reconciliation Act of 1996, commonly known as welfare reform. Welfare reform “created time limits and work requirements” and “abolished the entitlement to cash aid for poor families with children.” Welfare reform also set a floor for aid, effectively locking out the poorest of the poor among us. This was the culmination of a pervasive smear campaign directed largely against low-income Black women who were villainized as “welfare queens” bent on gaming the system.

As the law’s title suggests, welfare reform was based on the idea that poor people are to blame for their poverty. If you’re poor, it’s your fault. You’ve failed to take responsibility for bettering your life, and therefore you must be incentivized to seek out opportunities that you’ve otherwise chosen to squander.

Benefits like this reflect a philosophy entirely at odds with the welfare reform efforts of the 90s: Struggling financially isn’t a personal moral failing and people aren’t to blame for it. For now, the stimulus only authorizes these payments for one year, though some Democrats are pushing to make the the child tax credits permanent. Hopefully, this philosophical shift in how we perceive poverty has staying power, and will deepen as we see more examples of how these kinds of unconditional cash transfers succeed.

The American Rescue Plan Act rejects the idea that poverty is a moral failing or a choice rooted in laziness and anti-social tendencies. We must also reject this idea in the criminal legal system. We must end policies and practices that criminalize poverty. Criminal codes are full of offenses that punish or punish more severely because a person is financially insecure. We need to repeal them all.

As recently explained in an opinion piece by a former prosecutor and a public defender, “[a]rrests for low-level offenses make up the majority of the cases in the criminal legal system. Up to 13 million misdemeanor cases are filed every year, and reflect 80 percent of all arrests across the country.”

Several years ago — before George Floyd was arrested on suspicion of committing a misdemeanor and killed by Derek Chauvin — the ACLU and the ACLU of Minnesota examined low-level arrest data from the Minneapolis Police Department. Over 33 months, the department arrested people experiencing homelessness more than 6,000 times for low-level offenses. Eighty percent of these arrests were for consuming alcohol in public, open alcohol containers, outstanding warrants for low-level offenses, trespassing, loitering with intent to commit a narcotics offense, disorderly conduct, theft, drug paraphernalia, begging/panhandling, and public urination. In a city that is 19 percent Black, a whopping 58 percent of these low-level arrests were of Black people experiencing homelessness.

In Tennessee, I represented a client who was serving time for a theft he committed when he was homeless. He was later released on parole but had nowhere to go and fell back into homelessness, which eventually led to a trespass charge. This charge violated his terms of parole and now he’s back in prison.

In Washington D.C., three law professors at Georgetown recently called attention to the criminalization of poverty in misdemeanor court. They explain that about half of the misdemeanors prosecuted are nonviolent and are “crimes of poverty.” They tell stories of “clients [who] were prosecuted for such crimes as stealing a burrito from a 7-Eleven or a pair of warm gloves from Macy’s, or begging for a free cup of coffee at Starbucks and not leaving when told to.” And they point to data showing that an overwhelming number of these prosecutions “have long been of poor people.”

In addition to the immediate consequences of low-level convictions, the ACLU’s Racial Justice Program has documented that this type of contact with the criminal legal system can result in people being locked up without court hearings or legal representation when they could not pay fines and fees for traffic tickets or other civil infractions or criminal offenses. Indeed, modern-day debtors’ prisons result from state laws allowing or requiring the suspension of driver’s licenses for unpaid court fines or fees without first requiring confirmation that the person could actually pay.

Criminalizing poverty just leads to more poverty and disadvantage. As the Georgetown professors explain, “[t]hose in misdemeanor court face serious consequences even for petty crimes. A conviction can result in loss of housing, income, legal immigration status, and more.”

If lawmakers can evolve beyond blaming people for poverty in the context of financial assistance, they can also stop criminalizing people for poverty and compounding it by subjecting them to a biased and bloated criminal legal system. Enormous resources are devoted to criminalizing poverty. Instead, let’s invest those resources into preventing poverty.

In the spirit of this historic American Rescue Plan Act, lawmakers should begin dismantling and repealing the many laws that needlessly ensnare Americans in the criminal legal system and ensure they remain below the poverty line. Poverty isn’t a moral failing, and it shouldn’t be a crime.