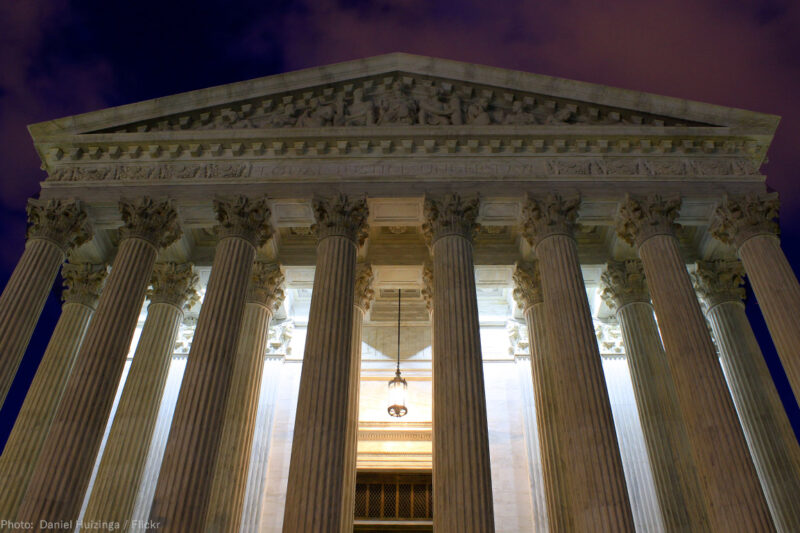 Update: On Dec. 6, 2018, the Supreme Court hears oral argument in Gamble v. United States, which seeks to eliminate the so-called “dual sovereignty” exception to the Double Jeopardy Clause. The ACLU and ACLU of Alabama co-authored an amicus brief with the Cato Institute and Constitutional Accountability Center to support Mr. Gamble and close the unconstitutional loophole. Other amici from across the ideological spectrum, including Sen. Orrin Hatch (R-Utah) and the National Association of Criminal Defense Lawyers, agree with ACLU’s position.

The Double Jeopardy Clause of the Fifth Amendment states that no one can be tried more than once for the same crime. The clause is designed to protect people from the danger of multiple prosecutions by overzealous prosecutors. Yet, since 1922, the Supreme Court has undermined this clause with an exception that allows state and federal prosecutors to bring separate charges for the same alleged crime. As a result, people can be prosecuted twice for the same offense — so long as the prosecutors are from separate “sovereigns.”

This “dual-sovereignty” loophole should be closed. On Tuesday, the ACLU and ACLU of Alabama, alongside the Cato Institute and the Constitutional Accountability Center, filed an amicus brief in Gamble v. United States urging the Supreme Court to end the exception for good. The case involves Terance Gamble, who was convicted in 2016 by a federal court for weapons possession when he had already been tried and convicted in Alabama state court for the same exact crime. The federal conviction added years to his prison term.

For nearly a century, the Supreme Court has operated under the questionable logic that having state and federal prosecutors bring the same case against the same person for the same offense in two different jurisdictions somehow makes it permissible.

So, under the current rules, if a defendant like Gamble is found guilty in state court, federal prosecutors, whose criminal statutes generally carry far heavier sentences, can still pursue a second case and substitute their sentencing judgment for that of the state. Even worse, if a defendant is found not guilty in state court — meaning she is legally innocent — federal prosecutors can still prosecute. This is a betrayal of both the spirit and letter of the Double Jeopardy Clause, which was supposed to protect people from just such successive prosecutions.

The framers knew that to a defendant accused of a crime, it doesn’t matter who’s doing the prosecuting — only that it should not happen more than once. The Double Jeopardy Clause was derived from a British common law rule that applied to prosecutions by separate sovereigns. And developments over the last 50 years only support closing of the loophole.

Second, with the ever-metastasizing federal criminal law — there are now over 4,500 federal crimes on the books — there is tremendous overlap with state law on everything from drug possession to tampering with an odometer. This greatly increases the threat of duplicative prosecutions for a vast and increasing amount of conduct.

Third, the use of joint state-federal task forces for investigating and prosecuting crime has been on the rise, roughly since President Richard Nixon initiated the war on drugs in the early 1970s. Under the aegis of these forces, state authorities may lose a case and then hand the file to federal prosecutors the very next day. This prosecutorial piggybacking undermines the claim that separate sovereigns occasionally need to investigate the same crime with separate interests. Often, they are simply prosecuting the same case, twice over.

It is true that the federal Justice Department has a standing policy discouraging such follow-on prosecutions. But that federal policy doesn’t stop state prosecutors from following federal cases with their own prosecutions. And in any event, we should not have to rely on the grace of federal or state prosecutors when it comes to fundamental rights. The Constitution bars double jeopardy, period.

Of course, a key question in this arena — debated vigorously in the wake of the Rodney King beating and Trayvon Martin killing — is whether elimination of the dual-sovereignty exception will hinder the ability of the Justice Department’s Civil Rights Division to rectify state court failures to hold police officers accountable by bringing federal civil rights prosecutions for the same incidents. This question matters greatly to communities of color reeling from unaccountable police abuse. It is also one the ACLU has wrestled with in the past. But we believe the answer in most cases is no.

State crimes like murder and assault, which law enforcement officers sometimes commit, are generally different from the federal statutes the Justice Department uses to later prosecute those officers. If the criminal laws are different, the crimes would not be considered the “same offense,” and a second prosecution would not violate double jeopardy, which bars successive prosecutions only for the “same offense.” The Justice Department would often be free to prosecute if it believes justice was not done.

Moreover, the Justice Department and private citizens alike may — and should — institute civil actions against bad state and local actors and the offices that harbor them. And public pressure and the election of reform-minded prosecutors can help ensure that state prosecutions of police brutality and prosecutorial misconduct are done, and done right, the first time, obviating the need for a second trial.

In other words, the right decision in Gamble would likely not let Rodney King’s or Trayvon Martin’s assailants off the hook. But it would save countless others from being on the hook twice for the same offense — a recurring injustice that is an affront to marginalized communities and the Constitution alike.