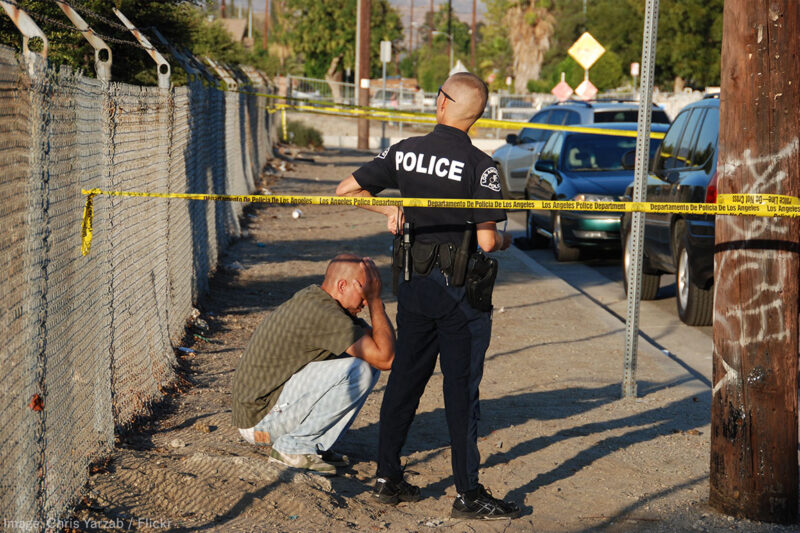 Peter Arellano’s life changed when a Los Angeles Police Department officer handed him a piece of paper informing him that he was now subject to a “gang injunction.” He could no longer visit his neighbors in their homes, drive to church with his family, ride his bike through the local park, or even stand in his own front yard with his father or brother. If he violated these terms, he could be arrested and jailed. Arellano, who has never been convicted of any crime, had effectively been placed on house arrest.

Gang injunctions are ineffective policing tools that primarily serve to criminalize young Black and Latino men. Nonetheless, Los Angeles has been operating a massive gang injunction program for decades. Like nearly 9,000 other Angelenos, Arellano was subjected to an injunction solely based on an LAPD officer’s opinion, a whim that was approved by a city attorney, that he was a gang member. He never got to challenge the allegation or even know what evidence was used against him. This decision to radically limit his freedom didn’t involve a court.

Gang injunctions represent a radical departure from constitutional due process. To obtain a gang injunction, a prosecutor files a civil “nuisance abatement” lawsuit against a particular gang, claiming that its conduct harms the community. The gang, which is not a formal organization and has no legal representation, does not appear at trial. With no one to argue against the need for an injunction, it is granted by default.

The police then serve people they claim are the gang’s members with copies of the injunction days, or years, later, asserting that they are now bound by its terms. While people could challenge after being served, it required proving they were not gang members without knowing why the city claimed they were. Unsurprisingly, only a handful of people were successful in getting freed from injunctions.

Gang injunctions turn common behavior into crimes, such as possessing everyday items like cell phones, drinking alcohol on your own front porch or in a restaurant, and associating with people the police also claim are gang members — even your own family. Officers’ gang designations are drawn from stereotypes and preconceptions based on clothing—anything from plaid shirts to basketball shorts to khakis—that they deem “gang attire,” associates, and if someone lives or socializes in alleged “gang areas”—which can include an entire community.

Officers use injunctions to circumvent the protections afforded by a criminal prosecution, which is exactly why gang injunctions have been a significant tool in the LAPD’s arsenal despite no evidence they create a significant or sustained crime reduction. What they provide is the justification to stop, harass, and arrest Black and Latino community members.

Critics of injunctions — such as the Youth Justice Coalition, an organization that has been fighting against their use for years — have observed that injunctions recently have been used more as a tool to push Black and Latino residents out of popular neighborhoods than to fight crime. Indeed, the gang injunction enforced against Peter was obtained in 2013 in Echo Park — a gentrifying neighborhood where crime was at an historic low.

But the tide is turning. The ACLU of Southern California just won a major victory against the city of Los Angeles’ use of these restrictive gang injunctions — effectively ending the city’s practice. In a class action lawsuit, which included Peter Arellano and Youth Justice Coalition, the ACLU and co-counsel Urban Peace Institute and Munger Tolles and Olson challenged the city’s enforcement of injunctions without first providing a hearing on active gang membership, claiming this practice violated their constitutionally protected due process rights.

A federal court agreed, finding that the process was prone to error and granting a preliminary injunction prohibiting the city from enforcing its injunctions against anyone who has not had the opportunity to challenge the designation in court before they were made subject to the injunction.

This is one of many recent victories both recognizing that police-imposed gang labels are often inaccurate yet carry serious criminal and immigration consequences, and creating a process to challenge these designations before they take effect.

Gang injunctions restrict people’s freedom, often without a shred of due process, on questionable “evidence,” and with no significant public safety benefit. The costs far outweigh even the alleged benefits and the ACLU and others will continue to fight to ensure that police don’t continue to destroy people’s lives by unilaterally imposing gang labels.