The Minneapolis Police Department Is Finally Sharing Data on Police Stops. Other Departments Should Follow. 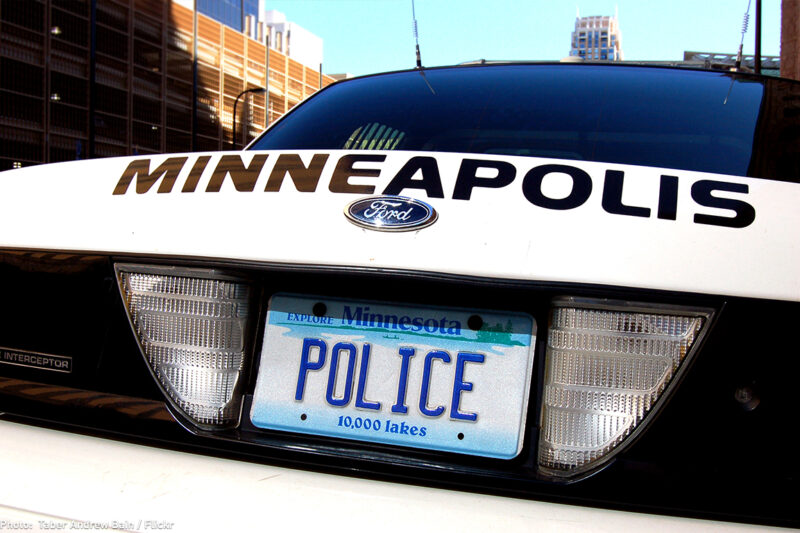 Unlike most police departments nationwide, the Minneapolis Police Department has taken an important step toward becoming more transparent and accountable to the communities it serves.

On August 9, it launched a new online data portal that allows the public to access raw data from certain stops, including suspicious person and traffic stops, that officers make. The data set goes back to November 1, 2016, and, as promised, has been updated every 24 hours since launch. The data is searchable by race, gender, location of the stop, whether a search occurred, and more.

With access to data like this, police reform activists and concerned residents will be in a better position to ask the mayor’s office and police chief why such disproportionate stops continue to be the norm and press for reform.

Collecting and making such data accessible to the public is, regrettably, far too rare for police departments nationwide.

The ACLU, along with allied organizations, has long advocated for police departments to increase their data collection and transparency. The Minneapolis Police Department has now stepped up, giving law enforcement organizations nationwide an example to follow. But it wasn’t easy.

In May 2015, the ACLU released a report analyzing low-level arrest data from Minneapolis. The results showed that African-Americans and Native Americans are over 8 times more likely to be arrested for low-level offenses than whites. That report, however, could not analyze patterns in police stops because the Minneapolis Police Department did not track stops, only arrests. This was a critical gap in monitoring police practices, particularly since communities of color have long reported unjustified police stops and harassment.

After we published the report, we pushed the Minneapolis department to track data on stops and regularly release the data to the public. Thanks to the support of the local police conduct oversight commission, the police department started tracking the data in late 2015, but it took another year and half of pressure to make it publicly accessible.

Collecting and making such data accessible to the public is, regrettably, far too rare for police departments nationwide. This kind of transparency should be mandatory for public servants who derive their power from us. In examining the largest 50 police departments around the country we found that only eight make data on stops public. Minneapolis is slightly smaller than any of these departments, but we included them for comparison sake. Of those eight, only Minneapolis is updating data daily and allows the data to be searchable by location and race. You can see where your city stacks up here. 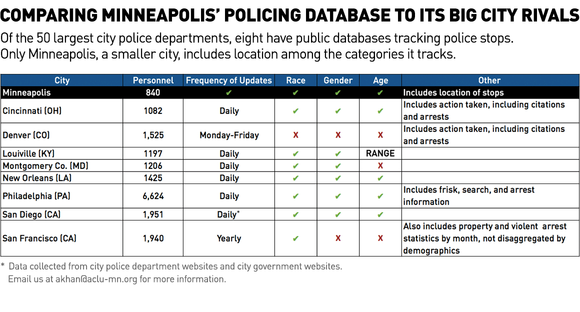 Publicly accessible data won’t eliminate racial disparities or end excessive uses of force, but it will help the community hold the police accountable for their actions and be more effective in advocating for reforms within police departments, like those in our report. Continuous data collection and analysis will make it easier to identify systematic problems and provide evidence on the kinds of reforms that have impact.

Minneapolis’s new program should set a standard for data transparency for other police departments around the country.