No Relief: William Barr Is as Bad as Jeff Sessions — if Not Worse 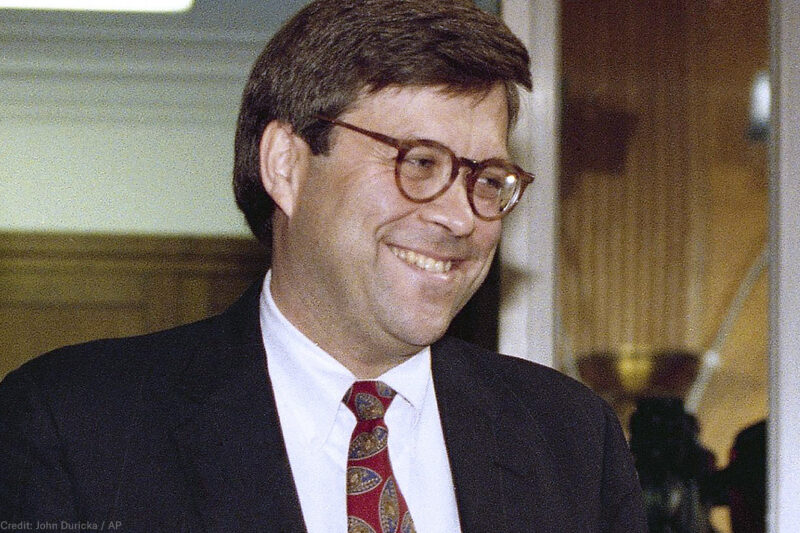 Donald Trump’s nomination of William Barr to succeed Jeff Sessions as attorney general ought to raise alarm bells across the country. Barr is as bad as Sessions was on the full range of civil rights issues that fall with the Justice Department’s purview. And he’s a longstanding advocate of expansive executive power.

It’s almost certainly the latter view that attracted President Trump, whose own power is likely to be called into question should the Mueller investigation into Russian interference in the 2016 election disclose wrongdoing at the top. But the Senate, who must confirm Barr, and the U.S. citizenry, who will have to live under him as the nation’s chief law enforcement officer, should be aware of the full range of threats he poses to constitutional law, civil rights, and civil liberties.

It’s worth reflecting on the Justice Department Barr would inherit.

Under Sessions’ leadership, it has become a force for injustice in virtually every important area of civil rights. Sessions was an aggressive defender of Trump’s cruel and inhuman family separation policy, the Muslim ban, and obstacles to asylum. He rolled back critical civil rights protections for LGBT persons. He opposed legislative efforts to reform the criminal justice system and directed federal prosecutors to file the harshest charges possible against criminal defendants, regardless of mitigating circumstances. He reversed the department’s position in voting rights cases, going from attacking to supporting voter suppression initiatives. And he sought to punish state and local governments that exercised their constitutional right to choose to leave federal immigration law enforcement to federal officials. Few attorney generals have done more to undermine the causes that the Justice Department is supposed to defend.

But Barr’s record, both in the Justice Department under George H.W. Bush and as a lawyer and lobbyist ever since, strongly suggests that we will see more of the same. If anything, Barr may be more effective at dismantling the department’s justice-serving mission than Sessions, because, unlike Sessions, he actually knows how the department works, having been deputy attorney general and attorney general from 1990-93.

In a nutshell, Barr has, like Sessions, supported aggressive anti-immigrant policies, opposed criminal justice reform, lauded intrusive surveillance of Americans, said Roe v. Wade should be overturned, and supported denying civil rights protections to transgender individuals. During his time in public life, he has defended the Muslim ban, Trump’s firing of FBI Director James Comey, and attacks on immigrant rights and free speech.

Here’s a quick rundown on all the ways William Barr should concern civil libertarians and the civil rights community.

Barr, like Sessions before him, is caught in the time warp of “tough on crime” politics, even as the rest of the country has seen a bipartisan consensus emerge that views mass incarceration as a serious problem. While serving as attorney general, Barr wrote the introduction for a Justice Department report with the remarkable title, “The Case for More Incarceration.” Even as the United States led the world in per capita incarceration, Barr rejected arguments that we were locking up too many. He wrote, “The truth, however, is to the contrary; we are incarcerating too few criminals.”

His views have not evolved. He praised Jeff Sessions’ opposition to Obama-era measures to reform local police department practices that jeopardized civil rights and civil liberties, and he also signed a letter opposing the Sentencing Reform and Corrections Act of 2015, which would have helped address the failed and discriminatory practices of mass incarceration. In 2015, Barr insisted, “Our system of justice is not broken.”

One of the Justice Department’s most sacred responsibilities is to advance and protect civil rights. Yet Barr supported Sessions’ rollbacks of civil rights, hailing him for reversing rules extending civil rights protections to transgender individuals. And he supported Sessions’ siding with businesses that invoked religious beliefs to discriminate against gay and lesbian customers.

Barr is an unequivocal opponent of women’s right to choose when and whether to have a child. This is probably the single most important civil right for women. As numerous studies have found, if one cannot plan one’s family, one cannot be an equal member of the workforce. In his 1991 confirmation hearing, Barr said that Roe v. Wade should be overruled: “I do not believe the right to privacy extends to abortion… I believe Roe v. Wade should be overruled.”

Barr was a strong proponent of the George H.W. Bush administration’s illegal program of interdicting Haitian refugees on the high seas, detaining them at Guantanamo Bay, and denying them access to lawyers. Approximately 300 of the refugees had HIV, and Barr created a separate detention camp for them. The program was challenged in court, where the government was ordered to provide access to attorneys and ultimately required to bring the HIV-positive Haitians to the United States for treatment, as their conditions at Guantanamo were deplorable. But throughout, Barr was a strong advocate for a policy that set the stage for the treatment of Guantanamo detainees during the war on terror.

Here, too, Barr has not evolved.

He has strongly backed Trump and Sessions’ cruel approach to immigration, praising them for attacking “the rampant illegality that riddled our immigration system” when court decisions suggest that the real “rampant illegality” stems from the Trump administration itself. He defended the legality of Trump’s first Muslim ban, saying that he saw “no plausible grounds for disputing the order’s lawfulness.” That ban was struck down by multiple courts. And even Trump finally abandoned it on the advice of his lawyers, who saw that there were indeed many plausible grounds for challenging it and urged Trump to substitute a narrower and more defensible ban.

As attorney general, Barr ordered telephone companies “to turn over lists of all phone calls from the USA” to dozens of countries under a Drug Enforcement Administration program that was a precursor to the bulk phone metadata program disclosed by Edward Snowden and repealed by Congress in the 2015 USA Freedom Act. Later, Barr became general counsel for Verizon and reportedly helped coordinate the telecommunication industry’s successful efforts to lobby Congress for immunity from private lawsuits for aiding the government’s illegal warrantless surveillance programs.

Barr is also no friend to free speech. He testified in favor of a constitutional amendment outlawing flag desecration, which would have directly undermined First Amendment free speech rights of Americans. The Supreme Court twice ruled flag desecration laws unconstitutional; Barr’s solution was to amend the First Amendment. More recently, he was an outspoken advocate against net neutrality, a critical policy to ensure equal access for all to the Internet.

Finally, and no doubt most important to President Trump, Barr has long been a staunch defender of expansive executive power.

In a 1989 memo, he called on the president to resist “congressional incursions” into the president’s appointment power and advocated “vigorous opposition” to limitations on the president’s power to unilaterally remove subordinate officials — precisely the issue that would be presented should Trump try to fire Special Counsel Robert Mueller. And as a citizen, Barr defended Trump’s firing of James Comey, justifying it on the obviously pretextual grounds regarding the former FBI director’s handling of the investigation of Hillary Clinton’s private email server, even though the president himself admitted he fired Comey because of the Russia investigation.

Barr’s view of executive power is extraordinary and would lead to extraordinary results. Neil Kinkopf, a former Justice Department official and constitutional scholar, has argued that Barr’s 1989 memo laid down “the theoretical and strategic foundations” for the George W. Bush’s assertion of “the president’s power to authorize torture.”

So from women’s rights and criminal justice to surveillance and free speech, William Barr would be “Sessions-The Sequel” if confirmed as the next attorney general. But it’s worse than that. Barr would not be recused from overseeing Mueller’s investigation, and he has already strongly condemned the very limits on removal that thus far have protected Mueller’s independence.

The Senate Judiciary Committee must scrutinize Barr’s record carefully and demand firm commitments from him on the independence of the Mueller investigation and the central duty of the Justice Department to enforce civil rights if he is to be trusted as our nation’s highest law enforcement officer.