The NYPD’s ‘Cult of Compliance’ 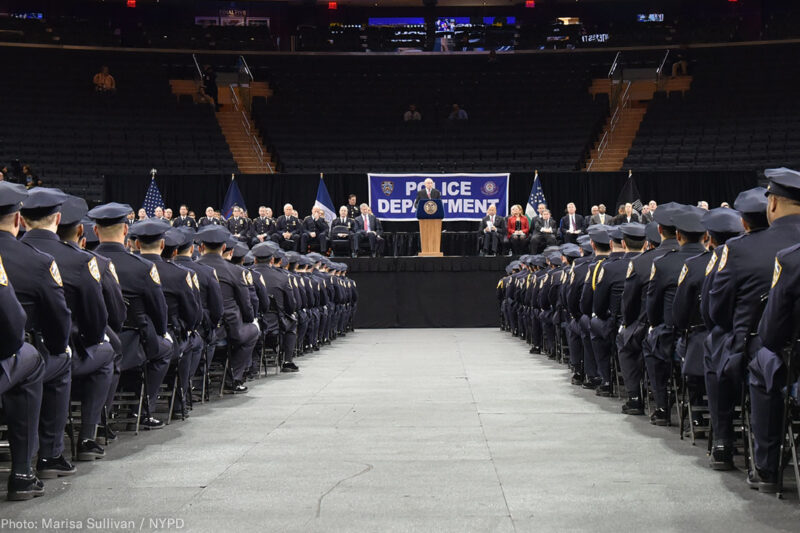 In New York City, bills are passed by city council members and signed by the mayor. But when the legislation is about policing, there is another, de-facto branch of government that must sign off: the New York Police Department. Though its leaders are not elected to office, the police bureaucracy acts as an unofficial gatekeeper that must be appeased before bills become law.

After more than 5 years of pressure from advocates, two measures, once known as the Right to Know Act, became law last week. The bills together were designed to improve police encounters by giving people more information about their rights when being stopped, questioned, and searched.

Sadly, on its way to the council floor, one of these bills took a detour that has become all-too-familiar for police reform advocates. The NYPD exercised its unofficial but very real veto power, and a bill requiring police to identify themselves to people they stop was rewritten — by the police.

In a series of closed-door meetings, the city council speaker, the mayor, and lawyers for the NYPD inserted a loophole in the bill that allows police to avoid identifying themselves in the most common types of police interactions, including traffic stops. This compromised provision was designed and agreed to without consultation from any of the advocates or community members who were calling for the bill, including several family members of people killed by the NYPD. Yet, our elected officials made sure the police department had the final word at the negotiating table.

The power of the police department over New York City elected officials is immense, uncompromising, and resilient.

But why would elected officials in one of the most progressive cities in the country, officials who came into office on promises to reform police practices, create this huge loophole in a reform measure? Simply because the NYPD demanded it. The power of the police department over New York City elected officials is immense, uncompromising, and resilient. It persists even in the face of the institution’s decades-long history of abusing the trust, civil rights, and physical safety of New Yorkers.

While community groups worked hard to stop the compromised bill, it passed by a two-vote margin. A grassroots coalition representing more than 200 organizations, including the New York Civil Liberties Union, labor unions, and academic institutions, could not stop the police department steamroller.

We refer to this phenomenon as the “cult of compliance.” Just as aggressive uniformed officers demand total obedience by New Yorkers on the street, the NYPD brass demands obedience by elected officials. And, indeed, standing up to the NYPD comes with serious consequences.

In 1992, hundreds of NYPD officers broke out in a full-blown riot in response to then-Mayor David Dinkins’ plan to increase the independence of a civilian complaint review board. Intoxicated police officers, some in uniform, broke down barricades at city hall and blocked traffic on the Brooklyn Bridge.

In 2014, NYPD officers engaged in an illegal and shameful work stoppage — often called the “Blue Flu” — in response to Mayor Bill de Blasio speaking honestly about his desire to protect his son, who is Black, from police violence.

During the Right to Know Act vote, the lead sponsor of the compromised bill, Councilmember Ritchie Torres, was candid about the NYPD’s stranglehold on policy in New York City and how it impacted his legislation and strategy, saying, “we all have searing memories of 2014, when an open revolt broke out among the rank and file of the police department … if we can pursue a path to reform without provoking an upheaval in the NYPD, then why not do so?”

Reading that quote, you could forget that the police department is a municipal agency, headed by a commissioner who answers to the mayor. Its intimidation of politicians has turned it into a wild animal, needing to be calmed and cajoled into respecting the rule of law.

The lesson from the blue flu, obviously well taken by our mayor and city council, is that the NYPD is not to be challenged. It will exercise power over legislators one way or another — through backroom negotiations or through literal force. This unelected branch of government has a long history of violating New Yorkers’ rights and compromising public integrity. Yet its lack of accountability and dizzying resources make it nearly untouchable.

Nearly, but not completely. Organized New Yorkers have won major victories against the NYPD, including in recent memory winning the Floyd case to end stop and frisk, passing an anti-profiling bill over Mayor Bloomberg’s veto, and, now, reforming unjustified searches as part of the Right to Know Act. Every reform is progress, but we must organize to strengthen democratic control over the police.

The cult of compliance is bad for democracy, and it is terrible for New Yorkers of color surviving NYPD abuses on a daily basis. Voters need to demand more from their elected representatives. And elected officials need to know that their constituents care deeply about these issues and refuse to live in a police state.

In the 2018 council session, the NYCLU will be calling on the city to pass two police reform measures: the POST Act, to give New Yorkers more information about how the NYPD purchases and deploys spy technology, and the Right to Record Act, which guarantees an enforceable right to film and photograph police officers. The NYPD can’t be allowed to police itself.