St. Louis Police’s Chants of ‘Whose Streets? Our Streets!’ Once Again Reveal the Warped Mindset Infecting Too Many Departments 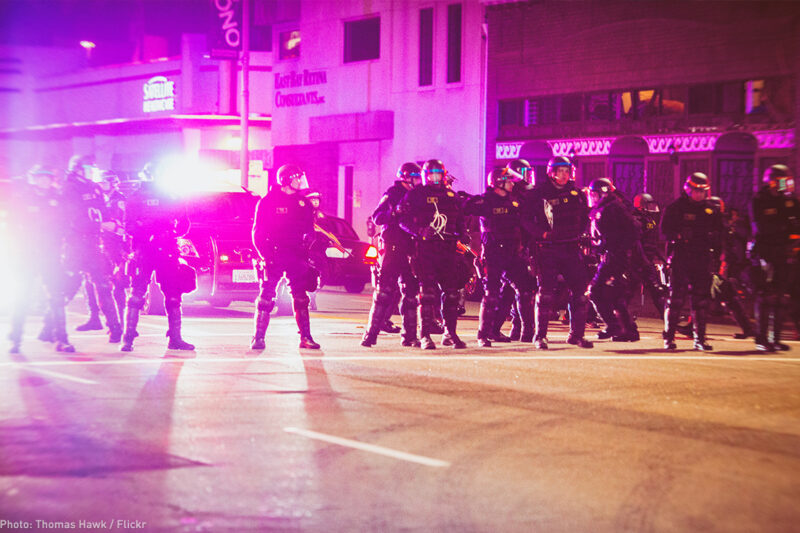 The antagonistic “us versus them” culture that plagues many police departments with regard to their interactions with communities of color was on full, disturbing display this week in St. Louis. In response to protests by community members over the acquittal of police officer Jason Stockley in the killing of Anthony Lamar Smith, a group of St. Louis police officers provocatively chanted, “Whose streets? Our streets!”

That’s right — in one of the nation’s most racially segregated cities, where zip codes separated by only a few miles can mean an 18-year difference in life expectancy — a police department entrusted to serve the community aggressively claimed ownership over public streets while mocking protestors expressing the community’s pain and frustration. They did so by co-opting a chant that emanated from the very communities of color long marginalized and victimized by this country’s criminal, economic, and political systems. And adding insult to injury, they did so less than a 10-minute drive from where Michael Brown was killed in Ferguson.

Make no mistake, the police were sending a clear and chilling message to communities of color in St. Louis: We do not care about your pain and frustration. We do not care about the complicity of law enforcement in past and present harms to communities of color. We do not care about your outrage at a white police officer who said he was “going to kill this motherfucker,” before shooting Anthony Smith five times, and then allegedly planting a gun in Smith’s car. And this message is being delivered by not just any police department, but the deadliest police force in the United States. The St. Louis Metropolitan Police Department kills its residents at a higher rate than any police department among the nation’s 100 most populous cities.

By shouting a claim of ownership over the city’s streets, St. Louis police again wasted an opportunity to build bridges with aggrieved communities and to see themselves as part or extensions of those communities. Instead they dug an even deeper trench between themselves and those gathered to express their collective frustration, anger, and sadness — people of color, peace activists, parishioners alike.

More disheartening, perhaps, is that, in a certain sense, the police are right: In many cities, the streets are theirs.

Police saturate Black and brown neighborhoods with aggressive patrols; carry high-powered weapons and equip themselves with wide-sweeping surveillance technologies; stop, search, and arrest Black people at wildly disproportionate rates; treat the Constitution not as a legal mandate but, at best, as a series of suggestions that can be ignored when inconvenient; and often act with impunity, unchecked by any meaningful external or even internal accountability.

Make no mistake, the police were sending a clear and chilling message to communities of color in St. Louis: We do not care about your pain and frustration.

Further, Jeff Sessions’ Department of Justice, rather than demanding progressive reform of harmful police practices, has exacerbated the national crisis over police-community relations by pulling back on federal oversight of police departments engaged in unconstitutional conduct, including repurposing the Department’s Community Oriented Policing Services program to facilitate more aggressive policing instead of prioritizing community relations. For his part, President Trump has deregulated the flow of military equipment to local police departments, only increasing the chances that police departments around the country will escalate tensions between themselves and the people, just as they did in Ferguson three years ago.

We should be in a better place by now. But nothing of gravity has changed if three years after the killing of Michael Brown and over one thousand other Black people nationally, St. Louis police officers think it is appropriate to proclaim ownership over public streets from the very community whose blood has been shed on those streets. Little has changed if the city’s police are still covering up their identification tags to avoid accountability for their anticipated unconstitutional, unlawful, potentially violent behavior.

Even after all we’ve been through in this country, the police are still corralling demonstrators into a small area like cattle and then arresting people en masse without probable cause. And yet, in response to these outrages, the police chief, the governor, and the state attorney general stand by in either silence or equivocation. Maddeningly, we have not yet seen the leadership necessary to achieve criminal justice reforms that are essential to protecting our cities and their residents.

The ACLU of Missouri called upon the mayor of St. Louis to condemn in the strongest terms the instigating, shameful chants of the city’s police department and to make clear that the police are here to serve the public, not themselves. Mayor Krewson responded, calling the chanting unprofessional. But it is worse than that. It is but one symptom of the corrosive and antagonizing culture that permeates too many police departments in this country. And it requires much more radical, profound solutions than light reprimands to eradicate.

Police departments must embrace de-escalation as a guiding principle; seek reconciliation with communities that they have harmed, a “process [which] recognizes the very real American history of abusive law enforcement practices toward minority communities, beginning with slavery;” support newer, stronger civilian complaint review boards that have meaningful investigative and disciplinary authority; end the selective and overenforcement of low-level offenses in communities of color, much of which is driven by a profit motive. Further, lawyers and judges need to reform a current legal standard that is remarkably permissive regarding when the police can use deadly force, resulting in “lawful but awful” shootings. Until then, police departments need to rise above the constitutional floor and establish more restrictive use-of-force policies.

The streets do not belong to the police. They belong to the community. The time for police reform is long past due. We cannot afford to wait any longer.