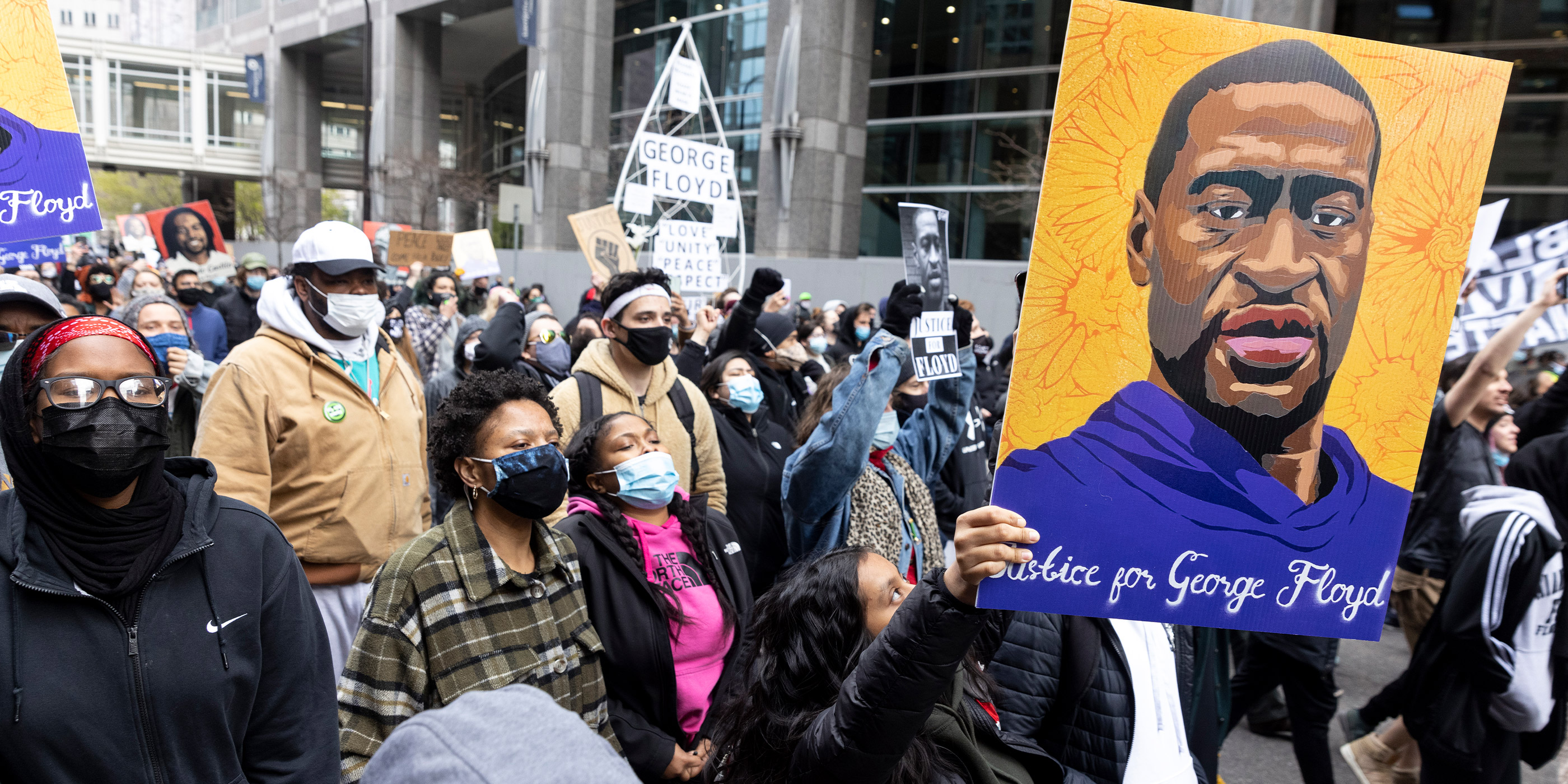 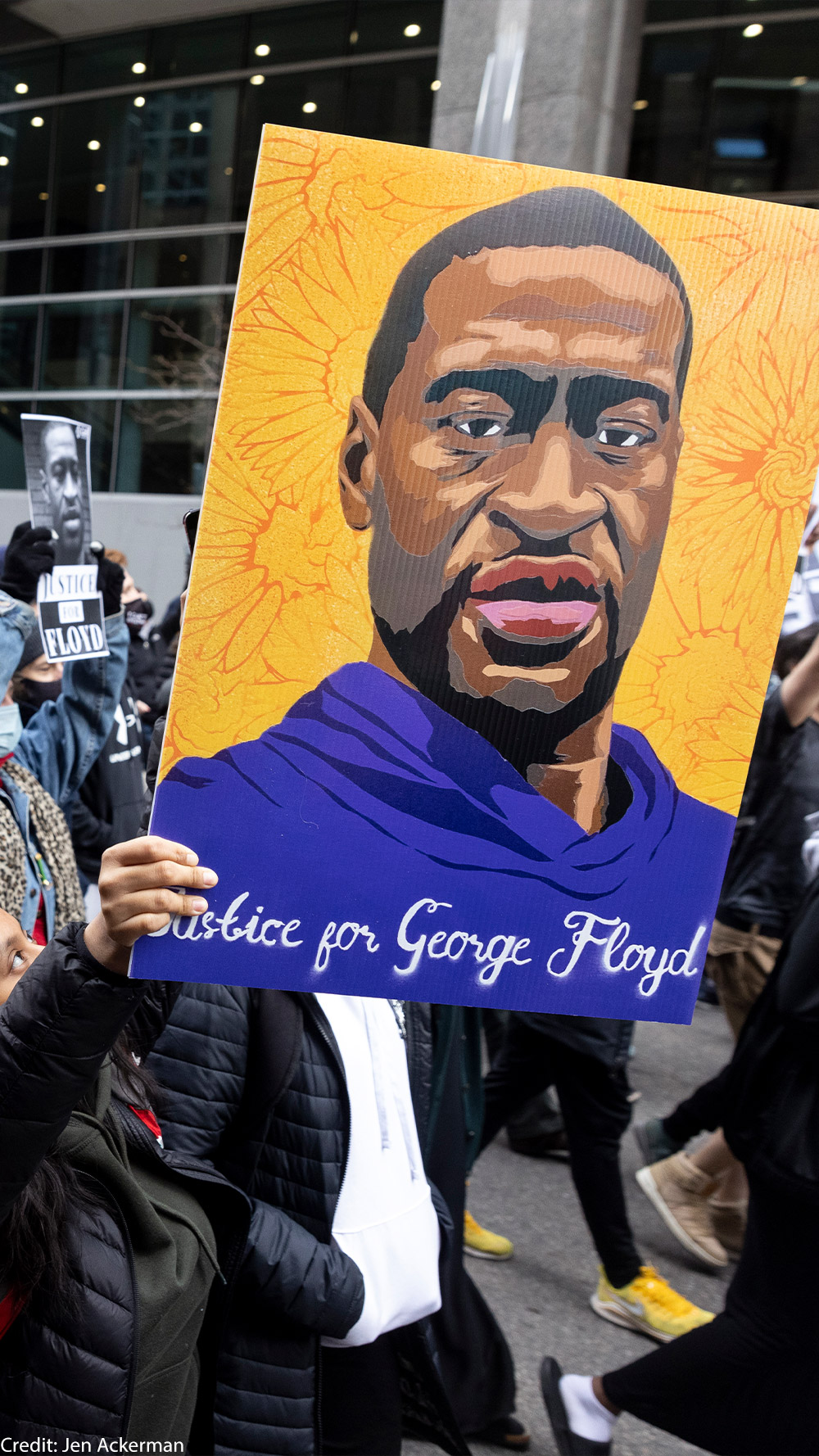 One year ago today, George Floyd was brutally murdered in broad daylight by Minneapolis police officer Derek Chauvin over 9 minutes and 29 seconds as he pleaded for his life. Floyd’s murder sparked the largest protests in U.S. history.

What has changed in the year since Floyd’s murder and that uprising? What has not changed? Where are we heading?

Let’s start with what is the same. Police still kill about three people a day and 58 percent of police killings this year began when officers responded to an incident like traffic enforcement or a mental health need. Black people are still three times as likely to be killed by police than white people, and 1.3 times more likely to be unarmed when they are.

In short, what has not changed since George Floyd’s murder is that communities of color continue to be patrolled by massively funded — $115 billion a year — and heavily armed police forces that disproportionately stop, arrest, jail, abuse, traumatize, and kill people of color. It is the continuation of a generations-old status quo of racial injustice, while alternatives that reduce harm and violence — medical and mental health care, schools, housing, employment, social services, and more — remain woefully underfunded.

What has changed in the last year, from coast to coast, in big cities and small, is that the movement to reduce the role, power, and resources of police is steadily gaining ground and building power. The focus is shifting from what is done after harm has already been committed by the police and toward preventing it from happening in the first place.

For example, a report from the Interrupting Criminalization Project documented that in 2020 alone, Black-led organizations and Black activists successfully advocated for $840 million to be reinvested from police departments, and secured investments of at least $160 million in their communities, including removing armed police from schools in over 25 cities (and counting), saving an additional $34 million for investment in meeting student and community needs.

They were also major advances in reducing the role of armed police. Like in Brooklyn Center, Minnesota, where the ACLU and local allies worked closely with the mayor and city council to pass a sweeping law that will create a new department to send mental health workers instead of police in many situations, start a civilian traffic enforcement department that would have prevented the death of Daunte Wright, and prohibit arrests in many situations that currently result in confrontations escalated by armed police.

Similarly, the ACLU worked alongside allies and city leaders in places like Rochester, New York, and Oakland, California, to move forward on new approaches to public safety, including crisis response teams, restorative justice programs, and assistance for unhoused people — all steps that reduce armed police from traditional enforcement roles. We also saw the evidence grow over the last year that these alternative approaches can save cities millions of dollars and effectively solve needs without the need for any police response at all.

Since George Floyd’s murder, we’ve also seen progress on repealing the outrageous legal protections invented by police lobbyists to shield officers from any semblance of accountability. The ACLU helped pass laws in Maryland, Colorado and New Mexico that begin to dismantle this architecture of impunity by making it easier to sue police who harm or kill, reigning in unchecked use of force, and repealing laws that swept serious police misconduct under the rug for decades. In even more states, the ACLU supported successful laws banning or restricting the most violent and dangerous police tactics, like chokeholds and no-knock warrants.

Where elected leaders were not moving fast enough, voters made their voice heard by approving ballot initiatives in 18 cities strengthening oversight over police. Just last week, voters soundly rejected a well-funded, fear-mongering campaign by the police lobby to remove Philadelphia’s elected prosecutor who had made police accountability a priority.

Despite these successes, we knew the road ahead would not be easy, and we saw that this year as well. In response to the power and effectiveness of the Black Lives Matter protests, states like Florida, Oklahoma, and Iowa passed anti-democratic and racist laws granting armed police even more power to arrest and jail protesters, stripping cities of local control over their own police budgets, and granting legal immunity to drivers who run over protesters. Even some reform-oriented elected leaders distanced themselves from reducing the role of armed law enforcement, despite the fact research shows that 63 percent of voters agree that some funding should be shifted from police to alternatives.

What to expect in the year to come? Undoubtedly, there will continue to be more police killings, more tragedy and heartache, more protests, more demands for change, and more opposition from the policy lobby and anti-reform forces. If the last year is any indication, however, we can also have real hope and resolve that these demands will increasingly lead to transformational changes.

We can expect to see other cities follow the lead of places like Brooklyn Center and prioritize approaches to community safety that do not rely solely on armed police. Where elected leaders refuse to act, voters will be ready to go directly to the ballot to shrink the role of police and decriminalize the low-level offenses that are fuel for racist and aggressive policing.

At the federal level, the ACLU is working alongside many allies on the Justice in Policing Act that could overhaul the judge-invented doctrine of qualified immunity, among other changes. In the courts, we will be pushing to overturn these recently-passed unconstitutional laws intended to blunt the power of protest, and suing to hold police departments accountable for systemic abuses.

The prospect of transformational change over the upcoming year also includes Minneapolis, where local Black organizers and activists have put a bold initiative on the ballot this November that would create an entirely new department of community safety in Minneapolis, and end the long-troubled and brutally violent Minneapolis Police Department.

After decades of organizing, followed by a year of unprecedented and historical activism, protest, and engagement, we are seeing progress removing armed police out of roles that can be better addressed by alternatives. If this kind of change can also come to Minneapolis, in the very city where George Floyd was killed, there is real promise of what this year and the years to come will bring.