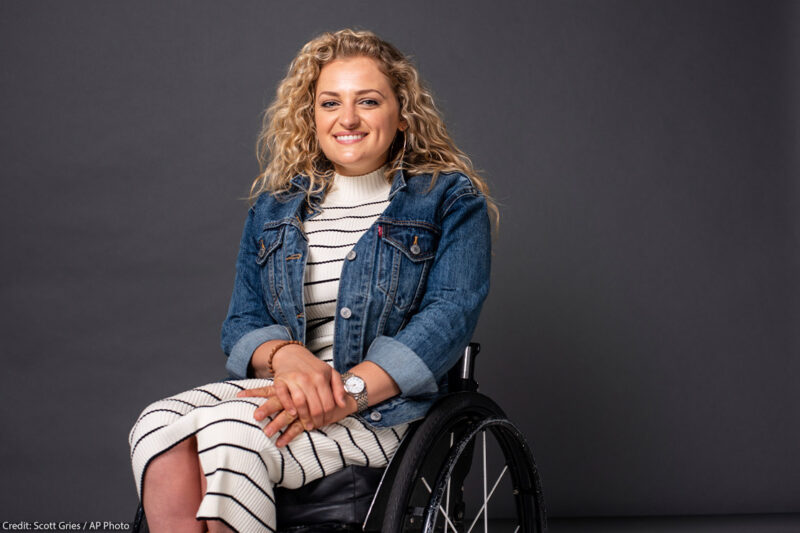 Disability Pride Month continues as the actress and singer joins us on At Liberty.

Over the past several years, we have witnessed a heightened demand for marginalized communities to be better represented in the media, in boardrooms, and every sector of society. While some progress has been made, representation of people with disabilities often takes a backseat in the conversation.

“This award is for every kid watching tonight who has a disability, who has a limitation or challenge, who has been waiting to see themselves represented in this arena,” she said while accepting the award.

Stroker’s representation is undoubtedly historic, but there is still so much more work to be done. Although there are around 133 million Americans who live with visible or invisible disabilities, their representation in media and entertainment remains bleak and in many cases, nonexistent. Across the top 100 movies of 2019 only 2.3 percent of all speaking characters had a disability. Even more alarming, when a character with a disability is portrayed, they often aren’t even played by someone with a disability. In fact, one study found that in the top 10 TV shows during 2018, only 12 percent of disabled characters were depicted by actors with the same diagnoses in real life. That’s why disability representation is more important than ever, as we strive to create a more equitable and inclusive world.

Since her historic broadway debut, Stroker has blazed the trail for more disabled representation, on and off the stage. This week, she sat down for a conversation with us on our podcast to discuss the importance of not just representation, but the celebration of disabilities in the entertainment industry and beyond.

Listen to Episode 166 of ACLU's "At Liberty" Podcast Below:

In this episode, we continue our celebration of Disability Pride Month with a conversation about representation.