Should Officers Be Permitted to View Body Camera Footage Before Writing Their Reports? 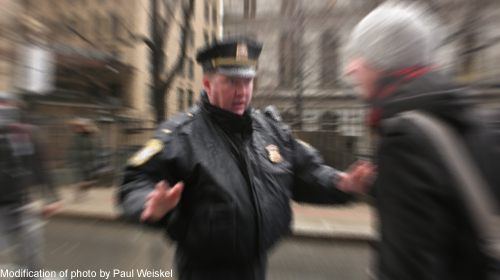 A police officer wearing a body camera shoots a civilian. Afterwards, the officer has to write up a report about the incident. Should the officer be able to view the footage captured by his body camera (or other cameras) before he writes his initial report?

To us, the answer seems entirely clear: of course not. Some departments agree—for example, when the Los Angeles Sheriff’s Department recently installed video cameras in its jails, the department, after careful consideration, adopted a policy that requires deputies in the jails to file reports on incidents before viewing video, for many of the reasons we articulate below. But surprisingly, this has become an increasingly common policy question as first dashcams, and now police body cameras, are deployed around the country. One prominent law enforcement group has even recommended that officers involved in an incident recorded on body cameras be allowed to view the videos before giving a statement about the incident.

The main argument that supporters of this policy give is simply that “we want police to give the most accurate possible statement, so why not let them view the video?” This argument may sound appealing at first blush, but if you scratch below the surface, permitting officers to view video before they make their initial report of an incident hurts accountability and accuracy far more than it helps.

Police departments don’t believe their own arguments. If they did, they’d show all the video evidence they have to the suspects in every crime they investigate. They don’t do that. In fact, one LAPD commander recently explained why LAPD often withholds autopsies in police shootings from the public for a period of time:

“We don’t want the witnesses’ testimony to be tainted,” Smith said. Detectives want to obtain “clean interviews” from people, rather than a repetition of what they may have seen in media reports about [the subject’s] death, he added. “They could use information from the autopsy to give credibility to their story,” Smith said.

It enables lying. If an officer is inclined to lie or distort the truth to justify a shooting, showing an officer the video evidence before taking his or her statement allows the officer to lie more effectively, and in ways that the video evidence won’t contradict. Video evidence can be enormously helpful, but it doesn’t capture everything from every angle. If an officer isn’t sure what was and was not captured by the camera, he or she will feel a healthy pressure to tell “the whole truth and nothing but the truth” in describing an incident out of a desire not to be later revealed as a liar by the video. But if the officer watches the video and discovers that certain elements that put them in a poor light happened not to have been captured—or that there’s a moment when the subject wasn’t in frame that the officer can say he reached for his waistband—then the officer will feel at liberty to shade and color their account of events, if not to lie outright.

It undermines the legitimacy of investigations. Because letting officers preview videos of an incident before giving a statement can allow them to lie, doing so undermines the credibility of officer statements and the integrity of investigations whether the officers actually lie or not. Such a policy will create an appearance of bias and therefore taint the integrity of investigations. After all, departments aren’t proposing to show video evidence to the subjects of uses of force or to civilian witnesses; that’s a special privilege they’re proposing to give only to officers.

It enables cross-contamination of evidence and impedes the search for truth. Even for officers who are trying to tell the truth (as we hope most do), showing them the video can easily influence their memory of events. A camera worn on a police officer’s body may capture some things an officer didn’t see and miss things an officer did see. That video provides one important piece of evidence on whether the officer acted reasonably. But the officer’s memory of what took place is also important evidence—especially since courts evaluate the legality of an officer’s use of force based on what he or she knew at the time, not on information gleaned from poring over video evidence later. Memory is highly malleable, and an officer’s initial recollections of what took place are likely to be altered by viewing the video, so that details that don’t appear on video are forgotten and things captured by the video are recalled as if experienced firsthand. As the Los Angeles County Office of Independent Review found in working on the Sheriff’s Office policy:

In our review of the available research, we found ample evidence that seeing additional information than what was experienced (such as seeing the action from a different angle) can alter the memory of an event.

Furthermore, if officers set down their memories before they are contaminated by viewing the video, they may capture important elements of the truth that a video has missed. An officer’s firsthand uncontaminated account could actually lead to a closer interrogation of the video and reveal ways that the video may be misleading. That’s important. Investigations shouldn’t spoil evidence of the officer’s initial recollections by showing the officer other evidence.

Proponents of showing officers videos (such as PERF in its body camera report, pages 29–30, 45–47, 62) agree that research shows that in stressful situations like shootings, even trained observers may have trouble to recalling events accurately. But they argue that since video is often the most accurate record of what occurred, letting officers review footage will help lead to the truth of the incident by helping officers to remember an incident more clearly. But none of those reasons justifies giving officers access to video before they’ve given an initial statement. Of course officers should be allowed to watch the video after giving an initial statement and offer additional information if it jogs their memory of something they left out or misremembered, or provide context if it shows something they missed entirely. That would help provide the fullest picture of what happened, including the officer’s commentary on the video evidence, without tainting the officer’s initial recollection or giving them a roadmap to lie without getting caught.

Most police aren’t upfront about their real concern: because memories are fallible, particularly in stressful events, officers’ initial accounts almost certainly aren’t going to match the videos exactly. Officers don’t want to be disciplined because they misremembered some details such as which hand a subject used to reach for a door or wallet, or even important facts like how many shots they fired.

That concern has some validity. Officers in a stressful incident like a shooting shouldn’t be disciplined for giving testimony that contradicts a video absent evidence that they intentionally misstated the facts. And yes, video evidence may force police, prosecutors, juries and the public to confront our misplaced belief in the reliability of eyewitness accounts. But every other subject of an investigation has to deal with those realities; police should not get special treatment in that regard.

The right answer is to confront that belief and change our perceptions, not to fabricate a false level of accuracy by letting officers tailor their accounts to video. To do so risks turning police body cameras from tools for police accountability into tools for police coverup.

We’ve learned that another major police department, Oakland, CA, has a policy prohibiting officers from reviewing video prior to making a statement in an investigation arising out of a Level 1 use of force (the most serious, including shootings). Oakland has had its share of controversies over the use of force, and has had body cameras since 2010, longer than most other departments in the United States.