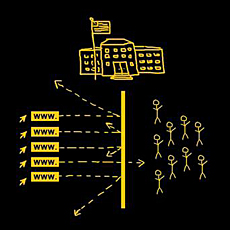 Can’t say we didn’t warn them. Back in May, as part of our Don’t Filter Me project, the ACLU sent a letter to the Camdenton School District informing them that the web filters they use on school computers were unconstitutionally blocking access to hundreds of LGBT websites, including sites that contain anti-bullying information and other resources for student gay-straight alliances. We informed them that if they failed to disable the filter, they would be “subject to legal liability and the expense of litigation…”

The school district brushed us off. So today, we filed a lawsuit on behalf of four of the organizations whose sites are being blocked by the district’s filter: PFLAG National (Parents, Families and Friends of Lesbian and Gays), the Matthew Shepard Foundation, Campus Pride and DignityUSA, a Catholic LGBT organization. At the same time, the filter does not block access to comparable anti-LGBT websites that address that discuss the same topics. Our lawsuit charges that Camdenton’s web filter violates the First Amendment.

The past year has seen a horrible spate of suicides among youth in the LGBT community. Web content provided by these four organizations can be life-saving for young LGBT students. As Jody Huckaby, executive director of PFLAG National, said in a statement today:

Our Safe Schools program resources, coming-out guides and other support and education resources that we have been providing to LGBT young people nationwide for nearly 40 years are all blocked. Many LGBT students either don’t have access to the Internet at home or, if they do, they don’t feel safe accessing this information on their home computers. In order to ensure the physical and mental well-being of LGBT youth — especially given the wide access to negative information on LGBT issues — these resources must be accessible.

A comprehensive 2009 study of over 7,000 middle and high school students reported that nine out of 10 LGBT students say they had experienced harassment at their school in the past year based on their sexual orientation or gender identity, and two-thirds said they felt unsafe at school because of who they are.

Our public schools should be doing everything they can to support LGBT students. That includes providing them with information and support. While the ACLU pushes for schools and software filtering companies to do the right thing and address the problem of filtering LGBT content, you can act too: tell your members of Congress to support the Student Non-Discrimination Act (SNDA). SNDA will help to ensure that discrimination against lesbian, gay, bisexual and transgender students has no place in our country’s public schools.