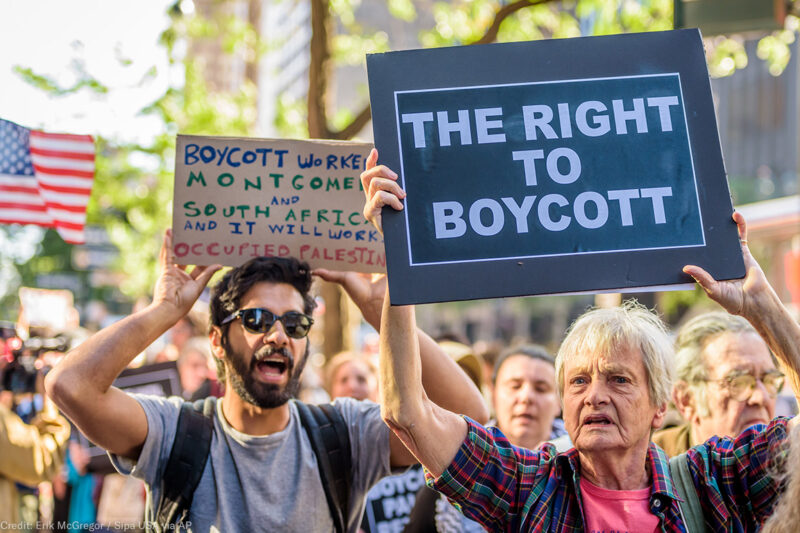 Last year, an Arizona federal court blocked the state from enforcing its anti-boycott law, ruling that the law — which requires government contractors to certify that they are not participating in boycotts of Israel or Israeli settlements in the West Bank — violates the First Amendment. In response, the state appealed the court’s decision and asked the Ninth Circuit to allow it to continue enforcing the unconstitutional law pending appeal. The Ninth Circuit refused and scheduled oral arguments for the appeal for June 6.

But instead of trying to defend its law in court come June 6, the state of Arizona is running scared. Today the state amended its anti-boycott statute in a transparent attempt to avoid another loss in court. The new law, signed today by Gov. Ducey, limits the anti-boycott certification to for-profit companies with more than 10 employees and government contracts worth more than $100,000. This means the law no longer applies to our clients as well as many other individuals and small businesses. It also means that the state will try to escape further judicial review and continue imposing the anti-boycott certification in at least some cases, even though a federal court has held that the law unconstitutionally infringes the First Amendment rights “that Americans and Arizonans use ‘to bring about political, social, and economic change.’”

We’ve seen this tactic before.

In Kansas, we filed a lawsuit on behalf of Esther Koontz, a member of the Mennonite Church USA, who lost the opportunity to participate in a state program to train math teachers after she refused to sign the anti-boycott certification. A federal district court blocked Kansas’s law, holding that the First Amendment protects the right to participate in politically motivated boycotts of Israel. Shortly after the court issued its ruling, state legislators scaled back the law so that the certification requirement applied only to companies and only to government contracts worth more than $100,000.

In Texas, we are currently litigating a lawsuit on behalf of four individuals who were forced to choose between signing the state’s anti-boycott certification and losing a government contract, including two university students who want to judge high school debate tournaments, a writer and translator, and a reporter. In response to our lawsuit and a similar lawsuit by the Council on American-Islamic Relations, Texas legislators introduced an amendment that would limit the certification requirement to companies with more than 10 employees and government contracts worth more than $100,000.

It’s easy to understand why legislators are afraid to stand by their laws in court. These anti-boycott laws are obviously unconstitutional. The Supreme Court has unanimously recognized that the First Amendment protects the right to boycott. Anti-boycott laws have a terrible track record in court. And several of the country’s most prominent First Amendment scholars have declared twice now that these laws are “plainly unconstitutional” because they are “clearly directed at the suppression of speech with which the state disagrees.”

But if state legislators know these laws violate the First Amendment, they should be repealing them, not passing half-measures designed to thwart judicial review. These amendments do nothing to cure the laws’ fundamental defects. The government is still forcing contractors to disavow participation in constitutionally protected boycotts, and it is still using its economic leverage to suppress one side of a public debate. The Supreme Court has made crystal clear that individuals and companies have the same First Amendment right to participate in political expression and association. Individuals like Esther Koontz, small businesses like Mik Jordahl’s solo law firm, and larger businesses like the Arkansas Times newspaper all have First Amendment rights. None can be forced to sign an anti-boycott certification.

It’s a shame that state legislators are trying to save face without addressing the fundamental First Amendment violations federal courts have expressly identified. But we won’t let them take the easy way out. Any business asked to sign an anti-boycott certification form should contact their local ACLU. While we don’t take a position on boycotts of Israel, we’ve defended the right to boycott for decades, and we don’t plan to stop any time soon.