Donald Trump Thinks the Freedom of the Press Is ‘Disgusting’ 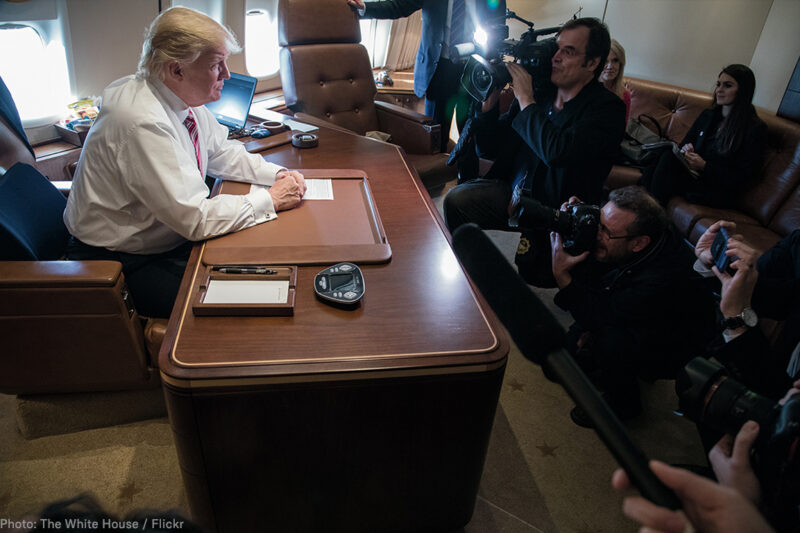 This post is periodically updated with new attacks on the media by the president.

Donald Trump has pledged to defend the Constitution — even an article that doesn’t exist — but he can’t seem to lay off that pesky First Amendment.

Trump has mocked the First Amendment’s right to freedom of religion by calling for a ban on Muslims from entering the country and criticized those who believe in the freedom of speech as “foolish people.” He has endorsed attacks on protesters and the imprisonment of people who burn the flag. He has attempted to silence and marginalize his critics by forcing staff, and even interns, to sign unconstitutional non-disclosure agreements and revoking, or threatening to revoke, the security clearances of former administration officials. His administration has also proposed to dramatically limit the right to protest near the White House and on the National Mall.

And Trump has made it very clear that he doesn’t stand for the freedom of the press. As a presidential candidate, he told supporters he would “open up our libel laws” to sue journalists. “We’re going to have people sue you like you’ve never got sued before,” he promised.

Trump the candidate also blacklisted reporters and entire news outlets from campaign events, referred to journalists as “scum” and “slime,” and mocked a reporter for having a disability. He vowed to sue women who reported incidents of sexual harassment and assault, along with the outlets that covered their accounts, and threatened a lawsuit against a Hispanic journalist group for calling out his bigoted remarks.

“I would never kill them but I do hate them,” he said of reporters. “And some of them are such lying, disgusting people.”

This onslaught didn’t stop once Trump assumed the presidency. From the most powerful perch on the planet, he has continued to wage attacks on the free press, further revealing his authoritarian impulses and disdain for the First Amendment.

Below we provide a running list of attacks that the president has made on the press since assuming office. We’ll keep this list updated since, unfortunately, we don’t expect them to stop.

While Trump tries to portray journalists at the “enemies” of Americans, it’s his attacks on the press that amount to an assault on the cornerstone of American democracy: the First Amendment.