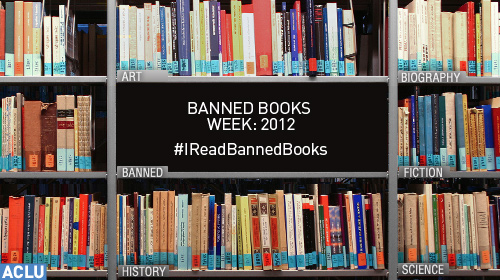 This week is marks the 30th anniversary of Banned Books Week, an annual event that celebrates the freedom to read and calls attention to the wealth of creative expression that is stifled when books can be barred from library shelves. The ACLU has always believed that our country functions best when citizens exercise their right to freely explore the world around them, and, we’ll be blogging about banned books and censorship all week. Join the conversation using #IReadBannedBooks.

This year marks the 30th anniversary of “Banned Books Week,” the American Library Association’s rousing celebration of free speech, and its condemnation of government shackling of library bookshelves across the nation. Free speech is a core mission of the ACLU: books are speech. They enrich us; they teach us; they entertain us; they confound us; and they challenge us. And sometimes, they make us uncomfortable. But there is no room on library shelves for censorship.

I’m a lawyer, not a literary critic. I can’t predict whether E.L. James’ Fifty Shades of Grey trilogy will have a long literary legacy or is just a blip on the radar screen of popular culture—regardless, it’s still at the top of the best seller lists.

Have I read the books? Sure. All three of them—thorough research is central to my profession. Do I care who will play Anastasia Steele or Christian Grey in the film version? Nope. [Did I have feminist qualms about a young woman playing a “submissive”? Sure, but in the end, Anastasia’s the one who… (no spoilers here).]

In Brevard County, “Really?” became a chorus of “Hell, no!” as men and women, card-carrying members of the Brevard County Library System demanded that the books be returned to the shelves. On May 24, the ACLU of Florida and the National Coalition Against Censorship sent a letter to the Brevard County Commissioners reminding them that the County’s removal of Fifty Shades of Grey from circulation violated the First Amendment to the U.S. Constitution and Section 4 of the Florida Constitution, and also exposed the County Commission to potential liability.

Over Memorial Day (what lovely timing) the County’s Communications Director announced that “The Brevard County Library System will return Fifty Shades of Grey to its library shelves.” The Library Services Director, who had made the initial decision to scrap the books, remarked “We have always stood against censorship.” Really?

But all’s well that ends well: score another one for the First Amendment.