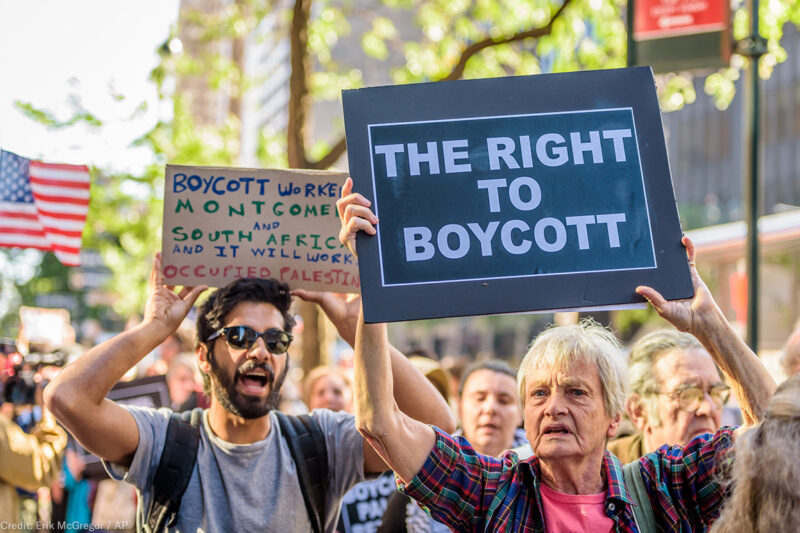 A number of states recently passed laws that require state contractors — including teachers, lawyers, newspapers and journalists, and even students who want to judge high school debate tournaments — to certify that they are not participating in politically motivated boycotts against Israel. Dozens of states have considered such “anti-BDS” laws, and a bipartisan group of 73 senators recently passed a bill — the Combating BDS Act — that would encourage states to adopt such laws.

The ACLU takes no position on boycotts of Israel or any foreign country, but we have long defended the right to boycott, which is protected under the First Amendment. That’s why we challenged anti-boycott laws in Kansas, Arizona, Arkansas, and Texas, and strongly opposed the Combating BDS Act in Congress.

Taking issue with our defense of the right to boycott, critics have accused us of hypocrisy for fighting laws that prohibit contractors from boycotting Israel while also supporting antidiscrimination laws that require businesses to serve the public. Anti-BDS laws, they argue, are also designed to prevent discrimination.

To be clear: Anti-BDS laws are not designed to prevent discrimination. In fact, they’re designed to discriminate against disfavored political expression, which is why two federal courts and several prominent First Amendment scholars have agreed that these laws violate the First Amendment.

When a business discriminates against people based on who they are — like when a cake shop owner refuses to sell a wedding cake to a same-sex couple — those discriminatory business decisions are not entitled to First Amendment protection. Even if identity-based discrimination is meant to express a political view, our society has an overriding interest in making sure that people are treated as equals in public accommodations, such as retail stores.

The same cannot be said about political boycotts. Refusing to purchase consumer goods and services to protest a country’s or company’s actions is not denying anyone access to public accommodations based on who they are — it’s classic political expression protected under the First Amendment. That’s where anti-BDS laws go wrong. They expressly target boycotts of companies operating in Israel or Israeli settlements because the government disapproves of the boycott’s message of protest against Israel.

Some have argued anti-BDS laws prevent discrimination based on national origin. But if states were genuinely interested in preventing discrimination by government contractors, they would broadly prohibit their contractors from discriminating based on protected characteristics, such as race, sex, and national origin. Many anti-BDS laws, on the other hand, prohibit only boycotts of Israel — boycotts targeting other countries or groups are completely unregulated. The myopic focus on BDS strongly suggests that these laws are meant to suppress protected speech rather than prevent discrimination.

Further, anti-BDS laws prohibit boycotts that do not even remotely target companies based on nationality. For instance, one of our clients, Mik Jordahl, refuses to buy Hewlett-Packard products for his one-person law firm. He boycotts Hewlett-Packard, an American company, because it provides information technology for Israeli checkpoints in the West Bank. But he does not boycott Israeli companies generally. His boycott nonetheless violates Arizona’s now enjoined anti-BDS law, which prohibits group boycotts of companies doing business in territories controlled by Israel, regardless of whether the boycott discriminates based on nationality.

Finally, antidiscrimination laws have not historically applied to boycotts of consumer goods or services. When Black citizens in Mississippi boycotted white-owned businesses to protest racial segregation, the Supreme Court held that the boycott was protected under the First Amendment. As the court made clear, consumers have a First Amendment right to withhold their patronage from businesses in order to express their political beliefs. On the other hand, businesses do not have the right to refuse service to consumers because of who they are.

When the government cynically asserts an antidiscrimination interest to suppress disfavored political expression, the harm is twofold: It violates civil liberties and waters down genuine efforts to address the real threat posed by bigoted ideologies, including anti-Semitism. That’s why the ACLU champions civil rights and civil liberties.

You can’t have one without the other.